The lawsuit alleges that when the city purchased the guns in 2019, it knew, or should have known, about the discharge and safety issues. It also says that during training for the weapons, the city “failed to disclose that the P320 had issues with discharging without a trigger pull, and the officers relied on the safety training to be accurate and complete.”

It’s the most recent legal action involving the P320, which has been the target of some 20 individual civil lawsuits.

Earlier this month, U.S. District Court Judge Joseph Laplante rejected a proposed class action lawsuit filed by an Arizona gun owner who argued his P320 lost value due to an alleged design flaw involving the weapon’s trigger. In addition, U.S. District Judge Landya McCafferty, hearing a suit brought by a Hillsborough man, ruled that Sig Sauer had not violated the state’s Consumer Protection Act in how it markets the gun.

One of those cases ended earlier this month, involving a Hillsborough man who alleged his P320 discharged without a trigger pull, resulting in a serious leg injury. U.S District Judge Landya McCafferty ruled that Sig Sauer had not violated the state’s Consumer Protection Act in how it markets the gun. Earlier this summer, a jury declined to award the same plaintiff, Kyle Guay, monetary damages. 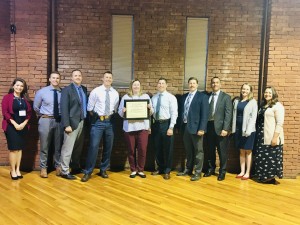 Jennifer Dickinson at the presentation of the Sandra Matheson Award

Jennifer Dickinson, the Nashua Police Department’s victim/witness advocate who serves victims of domestic violence, sexual assault and stalking, has been named the winner of the Sandra Matheson Award, presented annually since 2013 by the Attorney General’s Office.

Sandra Matheson created the Office of Victim/Witness Assistance at the attorney general’s office and was its director for 26 years until her retirement. Her pioneering work in the development of laws, policies, and collaborations led to improvements in the systems that respond to victims of crime. The Sandra Matheson award was established in 2013 to recognize other individuals that “embody commitment, collaboration, and leadership to improve the rights and services for victims of crime in New Hampshire.” 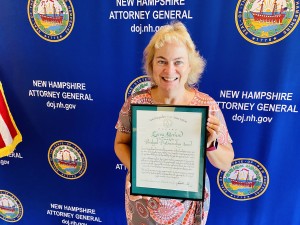 Laura Maynard, a paralegal in the Attorney General’s Office’s Environmental Protection Bureau has been named the recipient of the NH Bar Association’s 2022 Paralegal Professionalism Award, an award presented to the nominee “who best exhibits a high degree of professionalism: possesses an outstanding level of knowledge about their job; has motivation that exceeds expectations; is considered a role model for other paralegals; and promotes paralegal work as a profession.” Maynard started at the Attorney General’s office in 1988, first working in the Civil Bureau for 24 years before moving to Environmental Protection.