In letter to FTC, NH congresswoman calls on agency to investigate ‘blatant disregard’ of federal law 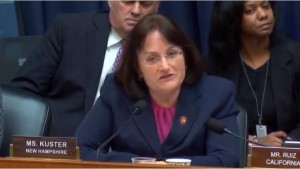 U.S. Rep. Annie Kuster, D-2nd Dist., is helping to lead an effort calling for the Federal Trade Commission to investigate the short video app TikTok for “blatant disregard” of a consent decree related to children’s privacy.

A letter, put together by Kuster and fellow Democrat Jan Schakowsky of Illinois , was sent by them and 12 other members of the House Energy and Commerce Committee calling for the FTC to investigate why TikTok failed to take down certain videos after it was found in violation of a federal law that protects children’s privacy.

The letter says that TikTok failed to take down the videos made by children under the age of 13, as it agreed to do under a 2019 consent agreement with the FTC.

TikTok’s violations were outlined in a complaint filed by a group of 20 non-profit organizations alleged TikTok’s misconduct, including the Center for Digital Democracy, Campaign for a Commercial-Free Childhood.

Citing the center’s complaint, the members of congress wrote that “TikTok appears to have failed to fulfill its obligations under the consent decree to destroy all personal information on users younger than 13, post a prominent and clearly labeled privacy policy, inform parents of the data they are collecting on children and how it is used, obtain parental consent before collecting such data, and provide parents with the right to delete this information on their children.”

It added: “The blatant disregard for the consent decree could encourage other websites to fail to adhere to settlements made with your agency, thereby weakening protections for all Americans.”

TikTok spokeswoman Hilary McQuaide told Reuters that it “takes the issue of safety seriously for all our users, and we continue to further strengthen our safeguards and introduce new measures to protect young people on the app.”

Kuster said she is “deeply concerned that TikTok has failed to protect the privacy of our nation’s children. At a time when kids are spending more time online as most schools have transitioned to remote learning, parents should not have to worry that a foreign-owned company is inappropriately collecting their children’s data.”