Is ‘year of family leave’ dawning in NH? 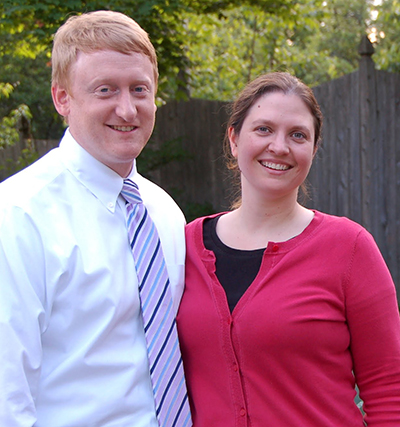 Dan Feltes, shown with his wife Erin, is prime sponsor of SB1.

Dan Feltes, shown with his wife Erin, is prime sponsor of Senate Bill 1.

Paying about $5 per head each week for an insurance plan that could help attract and retain employees in the midst of a labor shortage is a “no-brainer,” said ReVision Energy’s Dan Weeks, testifying Feb. 6 before the House Labor Committee on a family and medical leave insurance bill. “We think we would sign up overnight.”

Actually, if the bill he was testifying in favor of — House Bill 712 — does pass, Weeks wouldn’t have a choice, or at least his employees won’t.

Almost everybody now says they support the goal or concept of family and medical leave insurance, or FMLI. The question is how to go about it. Should it remain a voluntary benefit — much like health insurance — that employers offer to their workers to remain competitive, or should it be a benefit available to anyone, that everybody pays for, similar to Social Security, workers’ compensation and unemployment insurance?

HB 712, like Senate Bill 1 — another FMLI measure making its way through the Senate — takes the latter approach, mandating the insurance program for all businesses and all employees.

There is a good chance a version of one those bills will pass, leaving Gov. Chris Sununu with the politically uncomfortable position of signing or vetoing it.

If HB 712 does become law, the only decision Weeks will have to make is whether his employees pay for it or the company will, since the program depends on payroll deductions to finance it. ReVision could choose to pay the premium for them or offer its own program that will at least equal the benefits of the state’s program: 60 percent of their pay for 12 weeks to allow workers to take care of their own or a family member’s care needs.

That’s why only a few business groups — and not all Republicans — oppose such legislation. They are more amenable to Sununu’s proposal to unite with Vermont to provide FMLI to state workers paid out of the general fund with the hope that other companies will sign on to take part in the plan. The plan would be entirely voluntary, for both companies and their workers.

The two bills being considered in Concord, on the other hand, “tell the small business person in New Hampshire how to operate their businesses,” claimed Bruce Berke, state director of the National Federation of Independent Business.

But most business groups — including the Business and Industry Association of New Hampshire — have stayed on the sidelines in this debate, resulting in overwhelming support for the measures at public hearings.

It helps that neither of the FMLI plans under consideration would require employers pay a dime in benefits and their administration dovetails unemployment insurance. It also helps that FMLI has several provisions that include the private insurance market. And it helps that FMLI is starting to feel inevitable, especially in light of the last election.

President Trump even said during his State of the Union speech that he would include it in his budget (though it is unclear whether the existing employer tax credit of up to 25 percent is set to expire at the end of this year). 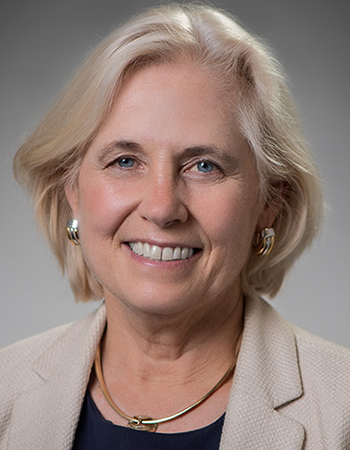 Six states and the District of Columbia now have required FMLI. (Three of them are up and running and none are falling apart.)

In addition, about 25 states are weighing FMLI legislation, and about 10 are expected to pass the measures. Massachusetts approved a program last year, and Maine and Vermont are likely to follow, leaving the Granite State an “island,” warned Marjory Robertson, senior counsel for Sun Life Financial, who added: “2019 will be the year of family leave.”

Wallner, who spent 47 years in the child care business, saw the need among her own workers and the parents they served. They simply couldn’t afford to miss too many paychecks to take care of a loved one, she said.

“It doesn’t take long for someone without wages to be thrown into crisis,” said Wallner.

“We value work. We value family. We should value the proposition that you shouldn’t have to choose between the two,” said Sen. Dan Feltes, D-Concord, the prime sponsor of SB 1. “It is also an issue for small business owners that don’t have the ability to provide these benefits on their own. This will level the playing field between small business and big business.”

About 13 percent of workers have some access to family leave, but the percentage decreases based on the size of the firm and the pay of the employee. Some 23 percent of firms with more than 500 employees offer some form of FMLI, but only 10 percent with fewer than 100 do. And 24 percent of employees in the top quarter of income levels have FMLI, compared to just 6 percent of those on the bottom of the wage scale.

But FMLI participation might mean different things to different people since there are few if any companies offering the comprehensive family leave benefits that are being mandated by state governments. Sun Life said it has developed one in response to New York, whose law requires that the program be administered by a private insurer, but it has yet to go nationwide.

“This market is evolving,” said Robertson. “The product will be here, maybe in five years, but we are scrambling to keep up.”

Even companies that strongly support family leave often only offer it in a limited way. The Hanover Consumer Cooperative Society, for instance, lets people bank their vacation days and add them to short-term disability, vacation and sick days to cobble together a leave policy. Stonyfield Farm offers 13 weeks of paid disability and 13 weeks of parental leave at 100 percent pay to take care of children, but doesn’t have any program for taking care of aging parents. Its disability policy — administered by Anthem though self-insured by Stonyfield — is particularly generous, offering 13 weeks at 80 percent, and 60 percent with no time limit.

On the whole, medical leave is much more established than family leave. Rhode Island was the first to mandate it in 1942 and it was the third state to implement family leave.

Rhode Island’s program is funded through a 1.1 percent payroll deduction and it covers up to 30 weeks with the family care aspect limited to four of those weeks.

About a quarter use the program for family and three-quarters use it for parental leave. The payroll deduction – set by statute based on a formula tied to the health of the fund – have remained steady, even going down slightly with the advent of family leave n 2015. 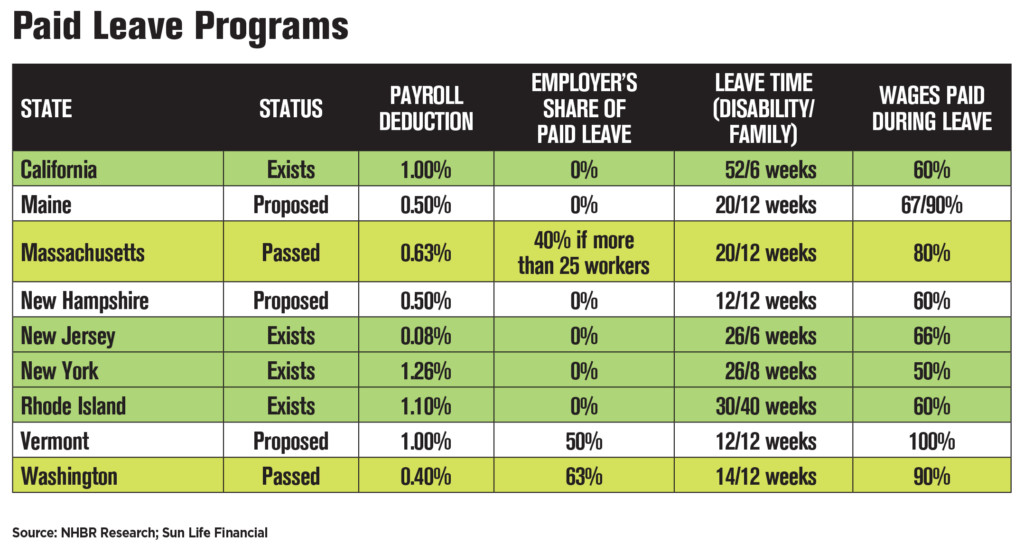 Rhode Island’s program is entirely government-run, unlike most others, which have a private component.

“Less than 5 percent goes to administration,” said Ray Pepin, the head of the Rhode Island Division of Temporary Disability/Temporary Care Insurance. “I don’t know how a private company can do that and turn a profit. The beauty of the program is that it spreads the risk, and we keep it simple.”

While there was “some grumbling at first” about expanding the benefit to family leave, “it has become a non-issue,” said Karyn H. Rhodes, director of Complete Payroll Solutions, a Rhode Islands benefits firm, particularly because the benefit level (60 percent) is low enough so that workers have an incentive to return to work.

Every state has its own twist on FMLI.

The Massachusetts plan — which was signed into law by Republican Gov. Charlie Baker last June and is still being worked out — would charge 0.63 percent of a worker’s first $128,000 of earnings. Workers would pay entirely for family leave, but employers with more than 25 employers, would have to contribute 60 percent to the medical leave portion.

A New Hampshire bill approved three times last year by a Republican-controlled House allowed employees to opt out of paying the tax and forgo benefits. But Sununu opposed that bill as not fiscally sound, and it died in the Senate.

This year’s legislation is mandatory, with a 0.5 percent payroll deduction. Both the House and Senate plans would take $15 million to start up over three years and about $6.6 million to administer, according to the Department of Employment of Security, which would run the program — though it might cost less if some of the administration were contracted out. The program would pay back the startup cost over five years, and the NHDES commissioner would have the power to raise the deduction or lower the benefits to keep the plan fiscally sound. Opponents charge giving the commissioner that power would mean an unelected bureaucrat would be able to set tax rates.

The House version, which started in the Labor Committee, will go though at least two committees and get two floor votes. The Senate has fast tracked SB 1, starting it in the Finance Committee, which already has passed an amended version attempting to address some concerns, such as imposing a 10 percent limit on the NHDES commissioner’s payroll deduction adjustment.

The House version sticks with the federal unpaid Family and Medical Leave Act threshold — mandating that firms with 50 or more employees are covered — requiring companies to hold the job of an employee who takes leave.

The Senate dropped the threshold to 20 in an amended version, and both bills have anti-retaliatory provisions that amount to more protections for workers in smaller firms.

Neither version covers state workers, leaving it to the collective bargaining process, though the amended Senate version mandates that FMLI be part of that process. The governor’s bi-state plan would provide six weeks of FMLI to 18,000 state employees in New Hampshire and Vermont, requiring that the bidders allow larger businesses to join at the same rate.

Those with fewer than 20 employees would be charged a “modestly” higher rate, and rates would vary with those firms with less than 100 percent participation. Some 84 percent of firms in New Hampshire have fewer than 20 employees, though they only account for about half of the workforce. (The governor’s press secretary did not return NH Business Review’s requests for comment by deadline.)

The governor’s plan not only depend on who responds to any request for proposal, but also on the unions and legislators in both New Hampshire and Vermont. The New Hampshire State Employees Association seems willing to consider it, though it has made clear that wages, not family leave, are a bigger priority.

“We’ll just have to see how it plays out,” said Rich Gulla, president of the SEA.

But their Vermont counterparts “are not on board,” said Doug Gibson, a spokesperson for the Vermont SEA. The union there supports a mandated proposal — a 1 percent payroll deduction to be split between employee and employer that would pay 100 percent of benefits for 12 weeks.

“We are in that camp. We are not in this team-up with New Hampshire thing,” said Gibson.

However, there is no reason one plan has to exclude the other. The governor’s plan focuses on state workers, but whether that would spread to the private sector is uncertain. Similarly, the legislative proposal covers private employees, but leaves the fate of the state workers to contract negotiations, which of course involves the governor. It also allows companies to opt out of the payroll deduction if they provide the same benefits. The governor’s plan provides six weeks rather than 12 weeks of leave, but doesn’t that leave some room for compromise? Could the two proposals become complementary rather than competing plans?

“They might go hand in hand,” said Robertson of Sun Life.

That would mean both sides would be clamoring to claim credit for FMLI’s passage, rather than both sides blaming the other side for the proposal’s defeat. That would never happen in Washington, of course, but it might be still possible in Concord.