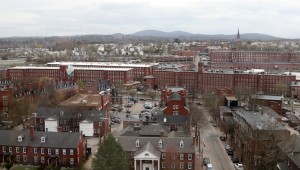 Amoskeag Manufacturing Company, the mammoth textile producer, reigned over Manchester until the company’s collapse in 1935. (Photo by Allegra Boverman)

Editor’s note: This article is part of the series, “Invisible Walls,” a joint project of the Granite State News Collaborative, NH Business Review, Business NH Magazine and NH Public Radio that describes how exclusionary zoning laws have reinforced areas of persistent poverty, impacting many aspects of community life, including crime, public health, affordable housing and access to economic opportunity in Manchester. The team used Manchester as a case study, but the same sorts of exclusionary zoning practices present in Manchester are common across the state, and likely have had similarly-broad effects. The first article in the series can be found here.

“What’s a ‘company town’?” asks America’s Library, an educational program from the Library of Congress. “In case you’re not sure, the story of the Amoskeag Manufacturing Company in Manchester, New Hampshire, is a good example.”

Company town, planned city, manufacturing utopia — these are some of the buzzwords that come up when reading about Manchester under the Amoskeag Manufacturing Company, the mammoth textile producer that reigned over Manchester until the company’s collapse in 1935. That lofty language reflects the company founders’ sky-high aspirations — driven, as one historian has written, by a desire to improve upon “the grimy industrial cities of Europe, where a permanent underclass toiled in the mills” — and hints at the reach of the company’s power.

So why didn’t things turn out as perfectly as planned?

Asked to speculate why the city’s inequalities developed in the way they did, Robert B. Perreault, a local writer and historian, begins his story in the late 1840s, back when Manchester was freshly incorporated, but already tightly controlled by Amoskeag.

“Since Amoskeag owned much of the land on both banks of the Merrimack River, the company could indeed dictate how the land would be used – for example, where the downtown business district would be, and even what kind of building and business blocks would go where,” said Perrault.

The company’s holdings were vast. By 1838, Amoskeag already owned most of the still-unincorporated city, totaling some 26,000 acres of land — more than all of Manchester today — including 15,000 acres on the east side alone. Amoskeag’s leadership wanted to use that monopoly power to design the city from the ground up, as had been done in other utopian industrial cities like Lowell, Mass. This included laying down a street grid and constructing worker housing, most of which was built between Elm, Canal, Hollis and Pleasant streets.

According to Aurore Eaton, a local historian, the company houses offered comfortable living.

“Those who lived there had a sense of security and a certain ease of living,” she wrote in her 2015 history, “The Amoskeag Manufacturing Company.” For employees lucky enough to get an apartment, “the workplace was a short walk away, and there was quick access to many of the necessities of life,” including entertainment in the downtown and the railroad station just down the street, “where a person could board a train and travel to and from Boston in a day.” 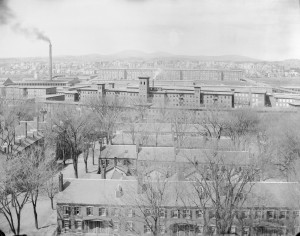 The kicker was that not all employees were allowed to live there.

“The company rented flats to its overseers, second hands, and skilled workers,” Perreault said, many of whom were American, though the invitation was extended to any skilled workers that the company hired, regardless of their nationality. (Amoskeag recruited heavily from Scotland and England, as well as from a handful of other European countries, including Germany and Sweden.)

Like their more privileged co-workers, unskilled immigrants looked for housing that was within walking distance of both the mills and the train station. The natural barrier of the river, which closed off much of the west side, left them with only a few neighborhoods from which to choose.

So, “when the first very large ethnic group of unskilled workers to arrive in Manchester, the Irish, got off the train, the closest residential neighborhood with a lot of multifamily affordable housing was [what is now known] as census tract 15,” Perreault said.

Thus began the pattern of poverty in center city. “When the French Canadians began arriving in greater numbers after the Civil War, they, too, got off the train and headed for the same neighborhood,” said Perreault. 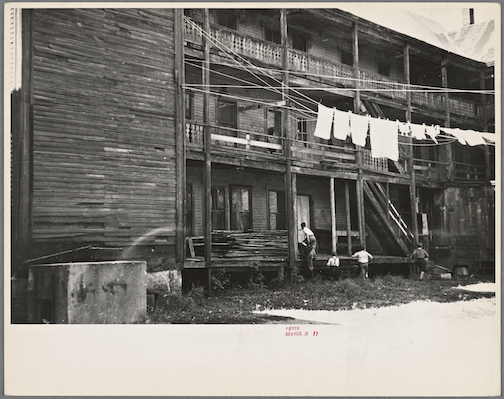 This history is reflected in the city’s churches. The first churches serving the Irish and French Roman Catholics were all built in the neighborhoods just east of company housing and north of the old railroad depot.

But with each generation of new arrivals, as the Amoskeag Company scoured North America and Europe for cheaper labor, the previous generation of workers needed a place to go.

According to historians Scott and Stephanie Roper, who wrote a book about Manchester’s labor movement in the early 1900s, the company dealt with this issue by drawing on its immense land holdings. When workers needed a place to go, the company would open up a new part of the city and would encourage the immigrant community to move together, maintaining the informal ethnic enclaves and clearing the way for new arrivals.

After the West Side opened for development in the early 1880s, for example, French Canadians began to move there en masse. “Amoskeag had a policy of selling plots of land in this new neighborhood to loyal, longtime mill workers whereby they could become homeowners via an affordable plan set up by the company itself,” Perreault said. “Much of the Franco-American West Side neighborhood was developed this way.” 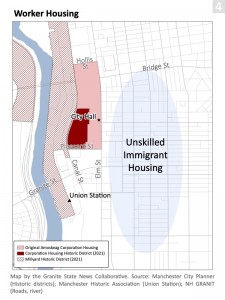 Perreault said that versions of this story repeated itself for each new group of arrivals, including from Poland, Greece, Russia and elsewhere in eastern Europe. Each ethnic group found affordable housing in center city, then quickly swelled in numbers in just a few years. (The Irish community, for example, grew from a few dozen in 1844 to 1,325 in 1850, comprising nearly 10% of the city’s total population, according to an article by John Clayton, longtime journalist and executive director of the Manchester Historic Association.) Once the ethnic community had grown wealthier, they moved to a new neighborhood, and the cycle began anew.

But the company’s strategy of keeping the ethnic groups intact and separated from one another also reveals a strikingly utilitarian aspect of Amoskeag’s utopian community.

According to the Ropers, the company’s housing policy was motivated by strong opposition to workers’ rights. By keeping the poorest workers divided, then providing extravagantly for the better-off workers as needed, the company kept many workers in their thrall, thereby slowing the development of the local labor movement.

From the company’s perspective, this strategy worked. Unions wouldn’t get a foothold in Manchester until 1918, and there wasn’t a single major strike at the Manchester mills until 1922.

But the policy of ethnic segregation had some nasty side effects, even at the time.

The workers were so divided that they sometimes came to blows, especially in public spaces like city parks. In 1854, native-born Americans clashed with the first wave of immigrants, the Irish, earning Manchester a mention in The New York Times for a riot that ended with the destruction of tenements on Elm Street and an attack on a Catholic Church, all occurring in “the Irish portion” of the city. Fifty years later, the now-settled Irish clashed with the newly arrived Greeks after a wayward hit from an Irish baseball game struck a Greek man in the face, breaking his tooth and triggering a 2,000-person riot. An entire squad of police officers was called in to disperse the crowd, according to the Ropers’ account of the incident.

These divisive policies also appear to have done a number on public health in the ethnic neighborhoods.

One 1917 U.S. Department of Labor study of infant mortality rates in Manchester found that the local poverty and substandard housing were strongly correlated with higher death rates. Mothers renting in the city’s most affordable housing developments had the highest infant mortality rates overall, at 211.4 deaths out of every 1,000 live births – far above the city average (165.0) and even double the rate in New York, the author noted with alarm.

Given the severity of the problem, the author warned that even though these issues were at that time confined to only a handful of areas, they threatened to spread across the city “unless controlled by adequate restriction” – an explicit call for the barriers between the poor and wealthy communities to be further strengthened.

By the time the Amoskeag Company was on its way out in the 1920s, under pressure from new competition in the textile market from the American South, the city’s neighborhoods were sharply delineated by ethnicity and economic class, but the corporate hand that had built those walls was rapidly weakening.

The Amoskeag Company’s dissolution in 1935 could have been an opportunity for these walls to come down and the city to integrate, but the last 90 years of local zoning policy has helped prevent that from happening.

This article is are being shared by partners in the Granite State News Collaborative as part of our race and equity project. For more information visit collaborativenh.org.