Despite Covid sales boom, concerns emerge about its staying power 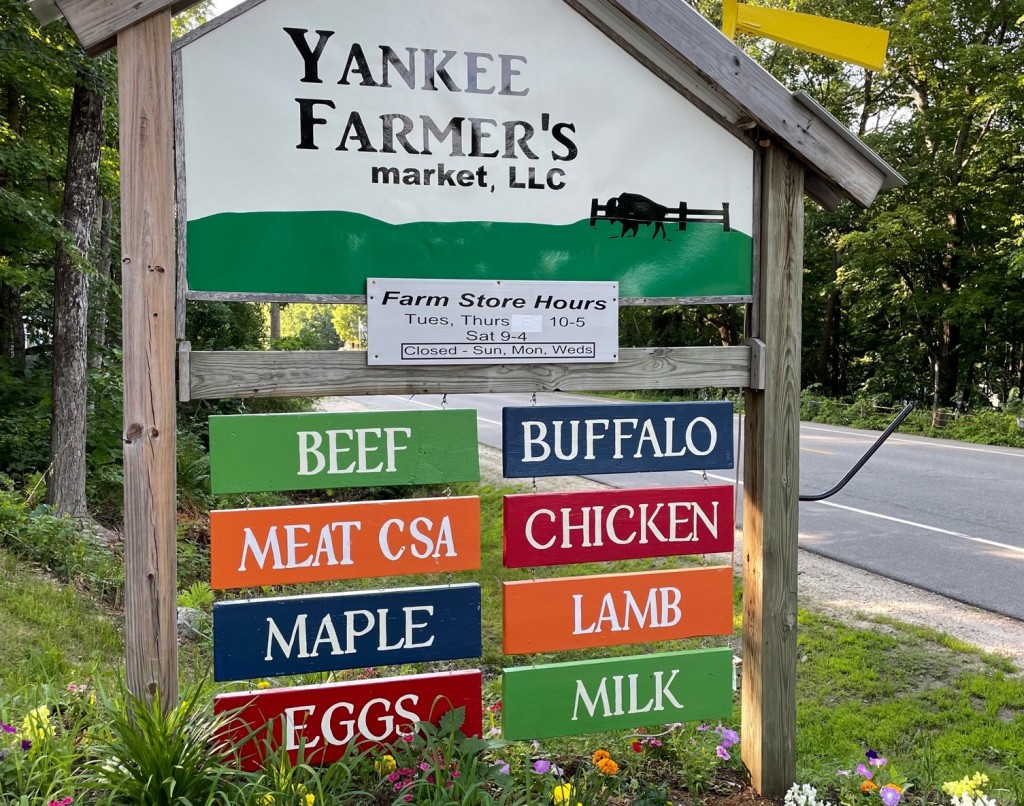 A green and white sign for the Yankee Farmer’s Market on Route 103 in Warner. (Annmarie Timmins/New Hampshire Bulletin)

Pooh Sprague had a record year on his Plainfield farm last year. The community supported agriculture program, often called a CSA, grew from 250 to 300 boxes. There was so much interest that the family farm had to start turning away customers.

That was a complete reversal from the previous year, when Sprague thought the CSA model was headed down the toilet, as he puts it.

But Sprague isn’t counting on the boom to last, and he’s not the only farmer who is approaching the future with caution.

“I don’t think there’s anybody who feels it’s the new normal,” he said. “Our feeling is we don’t know what our future looks like so let’s approach each year with a little bit of conservatism.”

Sprague has been farming for the better part of 50 years, and in that time he’s seen some pretty significant changes in the way people buy local food.

When he got his start in the 1970s, farming was a different animal, Sprague said. With his wife, they started a pick-your-own strawberry operation.

“Back then, if you weren’t milking cows, you were just some hippie growing vegetables,” he said. Their operation gained legitimacy when the couple started selling what they were growing. By 1981, they were full-time, full-fledged farmers at Edgewater Farms, where they’ve been farming ever since.

But the people who come to the farm now for pick-your-own are different.

“Fifty years ago, people picked to freeze, they picked to process, they picked for diabetic friends,” Sprague said. “The pick-your-owners were much more serious and focused.”

That translated into sales, too. Sprague said the average purchase then was twice what it is today. Today’s pickers come for what Sprague calls “agri-tainment.” They amble through the fields, with strollers and gaggles of kids in tow.

The way people consume local food has changed as well.

Karl Johnson, president of the board of directors of the Northeast Organic Farming Association of New Hampshire, remembers growing up in Nashua at a time when people got their food from a lot of different sources – as opposed to the one-stop shopping big-box stores offer consumers today.

“We used to have a fish man, and we used to have a bread man that would come to our house,” Johnson said. “There was a meat market not far from our house and my parents used to buy meat there.”

Now, local food producers have to compete with the convenience of grocery stores that gather all of those products under one roof.

“There’s a convenience that we can’t beat about buying your toilet paper and lettuce at the same place,” Sprague said.

So as great as last year was for Edgewater Farm, Sprague is moving into the next growing seasons with caution.

This stance is supported in part because, beyond anecdotes, there is surprisingly little information available to farmers or anyone in agriculture about the local food economy in New Hampshire.

That’s something Jess Carson and Analena Bruce are trying to change.

Carson and Bruce are researchers at the University of New Hampshire. Carson is a sociologist and research professor, and Bruce’s work focuses on agriculture and food systems. She also heads up the Food Systems Lab at UNH.

The questions Carson and Bruce are interested in answering have to do with how people engage with local food: what barriers prevent people from buying it and what opportunities exist to strengthen the food system.

“We don’t have a lot of high-quality representative data that can answer those questions for us,” Carson said.

So the researchers pulled together a few questions about local food consumption to tack onto a UNH poll, with the goal of using the information they gleaned to apply for a federal grant. If awarded, that grant would allow them to study in greater depth how to strengthen the local food system.

The poll – whose results were published at the end of June – shows that most Granite Staters do buy local food occasionally: About 50% of residents report buying local food a few times a month. And 80% have bought local farm food in the past year. Carson and Bruce co-authored the brief along with Isaac Leslie.

“That level of participation is not enough to really support a strong market, a sufficient and reliable market for New Hampshire farmers,” Bruce said.

‘A lot of variables’

More farmers are needed to increase food production, but that won’t happen if farmers aren’t confident in having a reliable market – which Bruce says is currently a limitation that’s preventing new farmers from getting their start.

Farmers are already up against a lot of uncertainty. “There’s a lot of variables in terms of where the stuff is sold,” Sprague said. On top of that, “We’re in the middle of a goddamn drought here.”

“There’s no guarantee we’ll have a potato crop. That’s six acres of potatoes that could go away because we just can’t take care of everything when it gets really bad.”

Sprague said climate change is a challenge. He’s noticed winters getting more moderate, and so far this year there haven’t been any real rain events. And there are none in the forecast, either.

The poll also revealed that engagement in the local food system varies greatly from county to county.

Some of those results came as a surprise, even to experts who have been working in local agriculture for decades.

“I was frankly surprised,” said Johnson, of the Organic Food Association. “I would have thought that it might be Hillsborough and Merrimack that would be the top counties, and maybe Rockingham because they’re the most upscale counties in New Hampshire.”

Johnson isn’t alone in thinking that way. The researchers themselves acknowledge that cost can be a barrier, especially for low-income residents who can have a hard time affording the often higher price you pay for a local product. Low-income residents may also have a harder time accessing the food because of issues like the transportation to get to a farmers market or a farm stand.

But the poll shows that just having the means to purchase local food isn’t a guarantee that people will buy it.

“In Rockingham, their income is high, and their engagement was the lowest of everybody,” Carson said. Thirty percent of Rockingham County residents reported never buying local farm foods.

This may be, in part, because buying local foods is also about values.

“Not everyone shares the same values,” said Bruce, whose work focuses on what she calls value space food supply chains or alternative food networks. Buying local food can be a way of expressing a commitment to environmental concerns, for example.

“Local is one of many values,” she said. And it overlaps with many other values like environmental sustainability, equity in the food system, and economic and community development in rural communities.

The poll found that the highest engagement with local food came along the border with Vermont.

Carson said she’s curious to follow whatever is happening along the Vermont border that’s driving engagement.

“It seems to be some kind of unique combo,” she said. “What’s the secret sauce in Vermont?”

Johnson said Cheshire, Sullivan, and Grafton counties are also probably the biggest farming counties. So there’s an abundance of local food being produced and available for purchase in those counties.

Still, across the state and region, researchers and local food advocates say there’s room for improvement.

“One of the positive aspects, I guess, of the Covid crisis is that I think that it sparked a lot more interest in local foods,” Johnson said.

Certain foods weren’t available during the pandemic, and some people were more cautious about where they were getting their food and who was handling it. Johnson said the pandemic made people think more about both food safety and sustainability.

“What we’d like to do is keep that momentum going,” Johnson said.

New England produces only 12% of the food it consumes, Bruce said. The researchers are interested in better understanding how to increase that percentage. And based on the poll, they see a lot of opportunity to do that.

“There’s a lot of opportunity to support farmers in supplying more of the foods that we need through increasing public participation in local food systems,” Bruce said.

But part of acting on that opportunity is understanding the barriers that are preventing people from buying local.

Beyond price, other barriers include choice and ease of access. Those barriers are largely logistical, but the researchers also pointed to cultural differences that can affect who buys local food and how often.

“People’s food choices are really shaped by the identity that they share with their cultural group,” Bruce said.

And Carson pointed to Vermont’s food culture and the “spillover effect” it was having along the border between the two states.

“It’s the local food culture, the opportunities, the word of mouth,” Carson said. “That context is more available on the Vermont side.”

Plus, there are certain demographics of the population – like white, female, high-educated shoppers – that are more likely to visit farmers markets, according to Carson.

And that’s an area where the federal grant proposal could help the researchers increase their sample size to be representative of Black, Hispanic, and low-income consumers to get a better sense of what’s working for them and what isn’t.

“This was really a small set of pilot questions to set the stage for the larger study that we’re developing,” Bruce said. “So, absolutely, this is just the beginning.