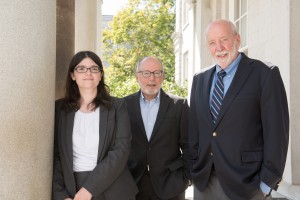 After filing suit in July to challenge New Hampshire’s school-funding system, attorneys representing five property taxpayers have raised the stakes by asking the court to issue an injunction forbidding the state Department of Revenue Administration from setting the rate of the Statewide Education Property Tax for the coming year.

Initially, attorneys Andru Volinsky, John Tobin and Natalie Laflamme brought suit charging the state has failed to fulfill its duty to fund an adequate education with taxes that are “equal in valuation and uniform in rate” throughout the state as ordered by the NH Supreme Court in its landmark Claremont decisions in 1993 and 1997.

The plaintiffs are now asking the Grafton County Superior Court – where the trial will be held in August 2023 – to order the state to “discontinue its unconstitutional public education funding scheme” and replace it with one that incorporates the full cost of a constitutionally adequate education to every school district amounting to not less than the average expenditure per pupil and including allowances for transportation, capital investment and debt service.

The State Education Property Tax, or SWEPT, is a surcharge on the local property tax levied at a fixed rate to raise $363 million. It represents the single largest share of the Education Trust Fund, which contributed $1.1 billion, or 28.6 percent, toward the $3.3 billion spent operating public schools in 2021-2022.

The Department of Revenue Administration has announced that the SWEPT rate for the next fiscal year would be $1.44 per $1,000 of assessed value. The department is expected to confirm the rate before the year is out.

In their initial suit, plaintiffs alleged the SWEPT was unconstitutional, explaining that since 2011 when receipts from the SWEPT exceed the cost of an adequate education, municipalities have been entitled to retain the excess, which they may use to lower property taxes or for other public purposes. Since these municipalities enjoy an abatement of the SWEPT, the tax is not levied at a uniform rate across the state.

This is one of several ploys by the Legislature to spare some two dozen so-called property-rich municipalities the full cost of the SWEPT, all of which the NH Supreme Court has rejected. In responding to the suit, Attorney General John Formella did not question or challenge this rendering of the SWEPT, but denied it bore any constitutional consequences.

The suit itself argues that the Legislature has priced a constitutionally adequate education at a base cost of $3,708, which is supplemented by “differentiated aid” for students living in poverty, learning English language and qualifying for special education services.

Altogether, in the 2020-21 school year the state provided districts an average of $4,578 per pupil in the form of adequacy aid, an amount the petitioners call “arbitrarily low and insufficient.”

Such adequacy aid represents a fraction of the average district expenditure per pupil of $18,434, which excludes another $3,300 of capital investment, debt service, transportation expenses and construction costs, and represents little more than a fifth of the total cost of education.

In its defense, the state claims school districts, as a matter of choice, spend to provide “constitutionally unnecessary programs and services” as well as “infrastructure and other resources,” which are unnecessary, inefficient or obsolete.