Larger corporations reap most of the benefits

Connection, the publicly traded technology sales and service company in Merrimack, is giving out $1,000 bonuses to all its 2,500 employees, partially because “we wanted to share the benefits” of the federal Tax Cuts and Jobs Act passed last December, said Connection CEO Timothy McGrath.

Mainstay Technologies, a technology outsourcing firm with offices based in Manchester and Belmont, says it will share all of it, but will have less to share, somewhere
between $500 and $1,000 in one-time bonuses “to create value for all the stakeholders, including our team members,” said CEO Ryan Barton.

Freedom Energy Logistics, a competitive energy supplier in Auburn, said it hopes to give $1,000 bonuses to its employees too and hire six additional people to boot.

“If AT&T can do it, we can do it,” said Gus Fromuth, managing director of the firm.

And Franklin Savings Bank recently announced that it will use a portion of its tax savings to provide employees with a $1,000 bonus as a result of the reduction in corporate tax rates.

“We continually look for opportunities to demonstrate the appreciation we have for our staff as they are truly the key to our success,” said CEO Ron Magoon.

But in the end, these four companies are proving to be the exception and not the rule in New Hampshire. Indeed, Connection, Mainstay, Freedom Energy and Franklin Savings were the only ones NH Business Review could find. But it should come as no surprise. So far, sharing the tax cut wealth is the exception rather than the rule among businesses across in the nation.

“In general, the impact of the tax cuts for business is going to be very positive, but it will benefit some a lot more than others.”

And in general, it’s larger companies that are benefiting from the tax break big time, with a simple rate cut. For smaller companies, such as the ones you find in New Hampshire, the cut’s not so big. And it’s complicated.

Of course, the tax law is still relatively new. Even though it has been in effect for more than two months and businesses have to start making their 2018 first-quarter payments in six weeks, accountants, the state Department of Revenue Administration and even the Internal Revenue Service itself are still trying to fully understand it.

That hasn’t stopped some major corporations from rushing forth to issue announcements that they will share the federal tax cut benefits in terms of bonuses, wage hikes or retirement contributions. These include companies like Walmart, Anthem and Comcast, all of which employ lots of New Hampshire residents.

Yet even the most ardent supporters of the tax cuts could list no more than 400 companies that have shared their tax law windfall. Even 400 firms would be just a minuscule fraction of the nearly 6 million businesses nationwide, or 2 percent of the 20,000 firms with more than 500 employees. 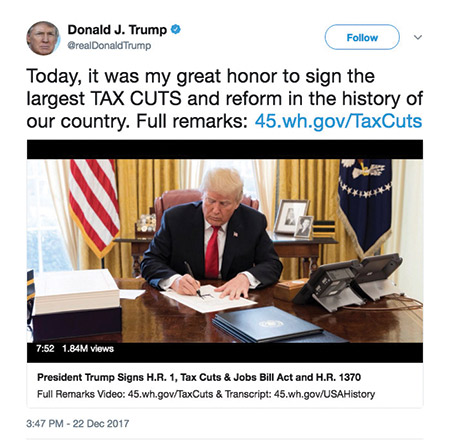 A few of those companies placed on the list don’t necessarily even belong on it. For instance, Connection, the only New Hampshire company included, said that it is giving out the bonus due to a “number of factors,” the tax act being only one. The company is also doing well, and “we are happy to reward our employees,” said McGrath.

Eversource is also on the list, but as a public utility, it is required to pass on the tax breaks to their customers. The state Public Utilities Commission has opened up a docket to figure out how to incorporate the tax cut into rates.

Connection’s $1,000 bonuses will cost it $2.7 million in the last quarter, according to its latest filing with the U.S. Securities and Exchange Commission. The filing also revealed it recorded a non-cash income tax benefit of $7.7 million in that quarter thanks to the tax act. That doesn’t include the tax benefits for years to come.

In any case, Connection is not your typical New Hampshire company. Only a handful are publicly traded, and none of them announced they would pass on the tax savings.

Only a few responded to NH Business Review inquiries about it. Unitil, the Hampton-based utility, reported in its financial filing that it got a $49 million benefit in its accumulated deferred income taxes thanks to the tax act, and — like Eversource — said that PUC will determine how it will pass that on to ratepayers.

And gun manufacturer Sturm, Ruger — headquartered in Connecticut but with a major facility in Newport — said the tax law will increase earnings per share by 3 cents in the last quarter of 2017 and that some of that would go to shareholders through dividends and stock repurchases.

“Of course, a reduction of any expense, including federal income tax, improves our bottom line and our financial position,” Kevin Reid, the firm’s senior vice president, general counsel and corporate secretary. “This, in turn, enhances our ability to capitalize on opportunities for growth and expansion, all of which benefit our employees, customers and stockholders in the long run.”

But most of the 30,000 companies in New Hampshire are not publicly traded corporations, they are closely held businesses, primarily LLCs, partnerships, S corporations and sole proprietorships, and of course they are much mostly small. Only slightly more than 2,000 companies in the state have 100 or more employees.

“In general, the impact of the tax cuts for business is going to be very positive,” said William J. Beauchesne, a principal at Nathan Wechsler & Company, a Concord-based accounting firm. “But it will benefit some a lot more than others.”

None of Beauchesne’s clients — which tend to be partnerships or S corporations — plan on “changing their behavior,” because of the law.

“They say ‘Well, that’s great, that is beneficial, but it’s not a game changer like I’m going to hire more staff or buy new equipment,’” he said. “That’s not to say that won’t come.”

“It will be business as usual,” said Ken Holmes, CEO of North Branch Construction, a Concord firm that employs about 80 people. The new tax law, he said, “is not going to do much for us as a company.”

“It is not going to affect us a whole heck of a lot,” said Chris Leuteritz, CEO of Patriot Foundry and Castings, a Franklin machine shop that employs 10 people.

“It’s not going to have a huge impact with what happens with our company,” said Brad Benson, president of Benson Lumber, a building supply company in Derry that employs 125. “We’d really love to give something more to our employees, but I don’t see that happening.”

The way the tax cut works for a corporation is simple. It cuts the corporate rate from 35 to 21 percent.

But for everybody else, it is a 20 percent deduction off business income. Even if a company was able to get the full deduction, the rate cut wouldn’t be as much, going from 37 to 29.6 percent, according to James Usseglio, a CPA at Baker Newman Noyes in Manchester.

And many won’t see that 20 percent deduction, especially if the owner of the business makes $315,000 or more. Then that deduction phases out, and disappears altogether at the $415,000 level, if the company is a service company and the profits are more than 50 percent of the W2 wages.

The wage rule is tricky. Is it worth it to hire contractors as employees to be eligible? And how does all this interact with state business taxes, one based on profits and the other based on payroll?

And what is a service provider? That isn’t clear yet. The IRS is coming out with regulations soon. But it includes lawyers and accountants so none of them will get a tax break above that $415,000 annual income (though they probably will benefit from the complicated law in simply getting more work). Architects do get the break. Consultants? Probably not. That’s one of the reasons Mainstay is uncertain how much of a tax break it will get, since consulting is part of what they do.

“We absolutely want to give the full amount of the tax break back,” said Barton.

“We want to do with this tax money what we would argue the government should be doing,” he said.

In addition to the above changes, which pertain to all businesses, there are some that affect just a few:

• If a company has foreign subsidiaries (known as a controlled foreign corporation, or a CFC) then it can bring all that money home now without having to pay a 35 percent tax rate. It still will have to pay taxes on it, this year, which will mean that some companies will see a tax liability in 2017. Standex International, a publicly traded conglomerate based in Salem with many foreign operations, said that it estimated an initial $15 million quarterly impact primarily for that reason, though it is expected to benefit in the long run. The provision is expected to cost Albany International Corp. — a publicly traded materials processing company based in Rochester — $5 million, but its effective tax rate is expected to drop from 32 percent in 2017 to as low as 27 percent in 2018.

The idea, of course, is that companies will be able to bring back cash and invest in the United States. Some large companies, like Apple, are reportedly doing that, but Stuart Lyons, international specialist accountant at Baker Newman, doesn’t know of any such firms in New Hampshire. The only one he could think of is a Maine lumber company with a big sawmill in Quebec.

On the other hand, the domestic production activities deduction — which was intended to provide tax incentives for businesses that produce most of their goods or work in the United States rather than sending that work overseas — is going away. That is one of the reasons that North Branch Construction won’t benefit that much from the tax cut.

• If the company made a large purchase of equipment after Sept. 28, 2017, it could benefit by a retroactive “bonus” in the law, which allows a company to expense 100 percent of tangible property, instead of 50 percent. (This isn’t entirely new, since there have been other times the deduction has been at 100 percent, points out Usseglio.) The bonus provisions was supposed to encourage investment in new equipment.

“It’s a nice benefit,” said Beauchesne, “but I can’t think of a single client who did a purchase for a bonus deduction, though some might accelerate a purchase.”

Jim Rubens, a commercial property owner in Hanover (and Trump supporter during the primary) said that he pushed up about $40,000 in capital improvements in 2018 thanks to the tax act.

But that purchase benefit is offset by a repeal of the like-kind exchange deduction, which could hurt firms that trade in large pieces of equipment or trucks for a newer model, noted Beauchesne.

• Finally, starting next year, you won’t be able to deduct anything for taking out your client to lunch and only get half off the amount for the meals you provide your workers. Beauchesne uses that deduction when purchasing meals for those in his firm working “ridiculous hours” during the tax crunch season. The employee meal deduction will go away completely by 2025.

That change “stunk,” he said.

Companies that have announced that they will pass along some of the benefits of Tax Cuts and Jobs Act to their employees, though bonuses or other means.

Initial Effect, based on SEC filings, *unless company provided the information.  The initial impact is usually how the tax act will affect retroactive deferred income taxes in 2017, balanced by negative income of repatriating assets.   The filings don’t estimate annual impact on the company going forward, though most say that the benefit of corporate income tax cut to 21 percent will be larger than the initial gain or cost in 2017.