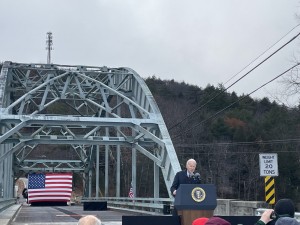 Biden stood in front of a bridge crossing the Pemigewasset River – known locally as “The Green Bridge” – that has been on New Hampshire’s red list of bridges in poor condition since 2013 and spoke about the impact the federal infrastructure spending could have for broadband access, clean water, climate resilience, and bridges in New Hampshire.

“What does it mean if a school bus, or water treatment trucks, or logging trucks can’t cross?” Biden said. “It means jobs; it means time; it means energy.”

The New Hampshire Department of Transportation anticipates the state will receive $225 million through the act specifically for bridge infrastructure, among other transportation funds.

More than 200 bridges in New Hampshire are deemed “structurally unsafe,” Biden said. And the 700 miles of highway in the state listed in “poor condition” cost Granite Staters an estimated $476 per driver each year, he said.

In his remarks, Biden praised New Hampshire’s congressional delegation, saying they pushed not only for investments in roads and bridges, but also for high-speed internet, protecting New Hampshire’s coastline from sea-level rise and ensuring provisions for safe water.

“The infrastructure law signed yesterday — and this is not hyperbole — would not have been possible without this delegation,” he said.

In Woodstock on Tuesday, there were mixed reactions to Biden’s visit. Some residents and visitors were excited about the prospect of new infrastructure investments across the state, while others weren’t so sure about the bill.

Kathy Saffo, who pulled over in the North Woodstock post office parking lot, was excited about the prospect of federal infrastructure spending.

“There’s a lot of roads with a lot of problems. I travel all over the place, and I know that bridge has been a problem for a long time. So I think it’s great,” she said.

Others in town said they didn’t see why Biden was focused on this particular bridge in the small community of Woodstock. Some said they were concerned about the cost of the infrastructure bill.

Dan Taylor, who was in North Woodstock to run errands, said that roads in the area needed help, but he was concerned that money wouldn’t go towards the infrastructure investments leaders have touted.

Biden addressed concerns in his remarks about how the cost of infrastructure investments could reach Granite Staters.

“I want to be clear, especially here in New Hampshire. No one earning in America less than $400,000 will pay a single, solitary extra penny in federal taxes,” Biden said. “I wouldn’t even let the bipartisan commission include a gas tax.”

Snow fell as the President spoke. A group of protesters with signs reading “Let’s go Brandon” gathered down the road from the bridge, and could be heard shouting throughout the president’s speech. Earlier in the day, protesters gathered in North Woodstock with their signs to demonstrate against Biden.

Biden was also greeted by protesters en route to Woodstock, including by at least one sign with a Confederate flag on it, according to press pool reporting.