How the ‘Great Resignation’ opened the doors of opportunity

UNH panel delves into its causes and new career strategies 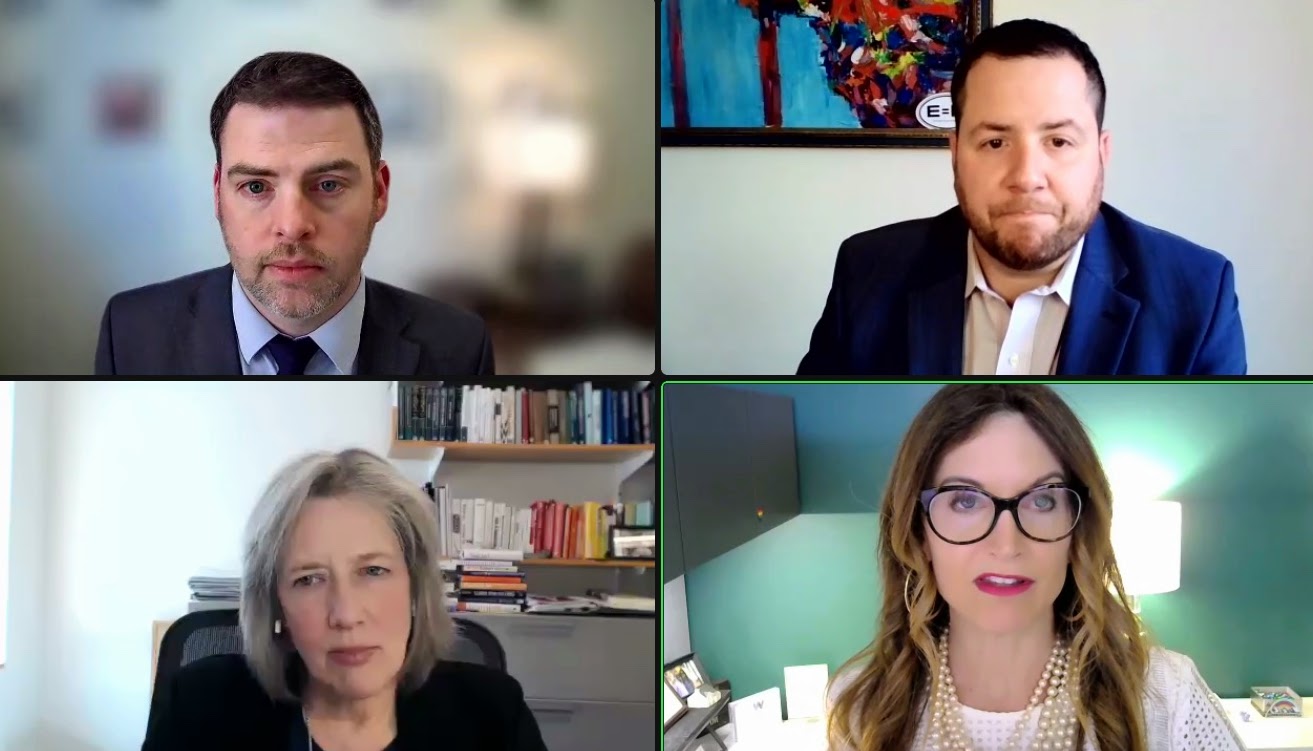 Participants in a UNH webinar about the ‘Great Resignation’ included (clockwise from top left) Dave Merry, associate provost and executive director of the Center for Career Education and Professional Development at Suffolk University; Cary Tober, vice president of franchise development at the REP’M Group; Bethany Cooper, executive in charge of Talent Acquisition at CoreLogic; and the moderator, Vanessa Druskat, an associate professor of Organizational Behavior and Management at UNH’s Peter T. Paul College of Business and Economics. (Photo by Paul Briand)

In November 2021, about 4.3 million Americans quit their jobs, a record number for a single month. About 33,000 were Granite Staters. Some found better work with new employers. Some started their own companies or franchises. Some retired. Some just left the workforce altogether.

They were all part of what is being called the “Great Resignation,” also known as the “Big Quit,” aka the “”Great Shuffle,’ an economic trend that had people leaving jobs en masse in unprecedented numbers. Their reasons varied – job and wage stagnation, stimulus payments that allowed some of them to leave their jobs and just explore what else was out there, Covid-related safety concerns, the lure of a better job, a better life.

With everyone staying at home, their lives turned upside down, the pandemic offered a period of reflection, particularly about work – how they work, why they work.

And with the Great Resignation came challenges and opportunity, according to a panel of experts at a webinar put on March 28 by the University of New Hampshire.

“People reflected on lots of parts of their lives and made some pretty drastic changes in their employment but also in other ways as well,” said Dave Merry, associate provost and executive director at the Center for Career Education and Professional Development at Suffolk University. He, like the other panelists, is a graduate of UNH.

Statistically, New Hampshire had the highest “quits rate” in the country in that record-breaking November 2021, shared with Georgia, at 4.5 percent. The national average was 3 percent.

According to the U.S. Bureau of Statistics’ Job Openings and Labor Turnover Survey, one in 22 people in New Hampshire quit their jobs.

All told, 68.9 million American workers quit, were laid off or discharged in 2021 across the country. Out of these so-called separations, 47.4 million were quits.

The reflection that contributed to those quits, about what to do next, came, in part, from disaffection.

“A lot of that reflection led them to believe: ‘I don’t want to work the normal job that I’m working,’” said Cary Tober, vice president of franchise development at the REP’M Group, who earned an MBA at UNH in 2008. He noted that people had enough assets – from 401(k) accounts or other investments – to put toward a business of their own, such as a franchise.

Bethany Cooper saw this wholesale change from her vantage point as the executive in charge of Talent Acquisition at CoreLogic, a financial services company.

“What we saw going into the first quarter of 2021 was a 200 to 400 percent increase in openings, which just created huge competition,” said Cooper, a panelist and UNH graduate in 1994, who also received a master’s degree in 2006.

“People were stepping out. They were leaving their jobs,” she added. “They were applying for new jobs, compensation went through the roof, companies were just really having to compete to find that top talent. So it’s created that sort of crazy talent environment that really still goes on in my company.”

She noted that CoreLogic has about 600 current openings to fill.

The webinar – entitled “Great Resignation or Great Opportunity? How to Capitalize on Change” – was moderated by Vanessa Druskat, an associate professor of Organizational Behavior and Management at UNH’s Peter T. Paul College of Business and Economics. She noted that between April and September 2021 the sector where most people left their jobs was retail, followed by management/consulting, then technology.

A lot of the discussion focused on tips to making the transition from one job to another.

“There’s lots of churn, there’s lots of noise,” said Merry. “If you’re out there just kind of looking, this is not a great time for that, to be exploring. This is a great time to actively target something you want to be at. My recommendation is to be very clear in what you’re looking for. Be very clear of what your expectations are going in.”

Merry said people have to ask themselves a couple of questions: One: “What is wrong, what’s the real core purpose of why I’m leaving?” Two: “What brings me joy currently, what’s the root cause of that and how do I find more of that?”

All agreed that an in-office workforce is a thing of the past. It’s a shift that Cooper has experienced firsthand at CoreLogic.

“We have historically and really through most of Covid been very passionate about getting people back to office. That’s the secret sauce, and the magic happens when people can collaborate in person. We’ve had a change of leadership, and that culture has shifted,” she said.

The new CEO has empaneled, with Cooper as a co-chair, a future-of-work committee “to figure out the future of what that looks like for our global organization,” she said.

The butts in the seat mentality is a holdover from a manufacturing past where people had to show up for work to do their jobs, according to Cooper, and that notion has been changing.

“What I am feeling is that you can’t stand still and expect people to be coming into an office in this climate,” she said. “You will lose. Your competition is going to be more flexible than you. We have to think differently.”

Then the task becomes keeping them engaged in a remote environment. There is the issue of trust, according to Cooper, and how to manage in a non-office/virtual office environment.

“There has to be some more fun built in,” said Cooper. “We’re missing those fun things that happen when you’re sitting around. How do you bake fun in.”

She turns over her remote team meetings to someone else on Fridays.

“They don’t want to hear from me every week, right? And so a different person on the team will take that and sometimes we’re literally playing Pictionary for 30 minutes,” she said. “And yes, we have stuff we need to be doing, but we need that time to just laugh and giggle and bond together, to really feel like a team because we’re not running to happy hour afterwards together.”

Employers in this new environment, panelists said, need to show interest in their employees’ advancement.

Tober, expanding on the mentor idea, added: “Don’t wait for your company to assign one. Go find somebody who’s doing the job that you want or you think you want. Ask him outright: ‘Let’s grab lunch, just get a cup of coffee.’”

The panelists also spoke about the use of social media and advancing their own brand.

They agreed that LinkedIn is the best tool for job networking. Merry suggested delving into the U.S. Bureau of Labor Statistics data to see what kind of jobs are trending as an indicator of what job sectors are doing the most hiring. “You might learn a little bit about some industries that maybe aren’t part of your experience and be like – ‘Oh, that’s an up and coming field; I had no idea and maybe I’m interested in that.’”

As much as companies enhance their brand, the panelists agreed that individuals should also brand themselves.

“The Instagrams and the Facebooks and all that are still relevant, so don’t overlook those,” said Cooper. “It’s important to build your brand, particularly on those social sites. Be intentional about what you want that brand to look like. I think the old advice was be careful on social. I think the new advice is be intentional on social.”