How much money are NH’s top execs making?

What is the salary of the top execs at publicly traded companies in the Granite State?

Stephen R. Theroux, the CEO of Lake Sunapee Bank is not exactly in the poorhouse – he was paid half a million dollars last year.

But when it comes to comparing the salaries of top executives of publicly traded companies, Theroux is at the bottom of the pay scale, earning nine times the salary of his average worker.

That ratio is the lowest ratio at any U.S.-based public company with a substantial number of employees in New Hampshire.

“That’s intentional,” Theroux said. “I’m in line with my peer group but also mindful of the median income of my staff.”

It doesn’t seem like too many other public companies in New Hampshire are that mindful of the differential between executive and employee compensation, even though they have to be reporting that information in their federal filings for the 2017 fiscal year.

Indeed, the average New Hampshire employee would have to work full time until the publication of this article – June 10 – to earn as much compensation as an average New Hampshire CEO earns in one day – a ratio of 162 to 1, according to a NH Business Review examination of 46 publicly traded U.S.-based companies either headquartered in or with substantial workforce in New Hampshire.

That average CEO, with a salary of just under $10 million, took a 5 percent pay cut in the last year (though compensation was actually up about 10 percent compared to 2013.)

If you look at the 15 companies based in New Hampshire, or with a larger percentage of workers in the state, the average compensation is under $3.5 million a year, or about 50 times the amount an average employee earns.

Of the regional companies, Eversource – which has just under a fifth of its workforce in the state – increased the pay of its CEO, Thomas May, by 26.4 percent over the last two years. He makes $9.7 million, or more than 110 times the pay of an average utility worker in New Hampshire.

Of the companies based in New Hampshire, the top spot goes to Raymond Barrette, the CEO of White Mountains Insurance Group, who earned $8.1 million last year — 76 times the amount of an average employee in the reinsurance industry.

But all that pales in comparison with the pay scale at 31 national publicly traded companies, which only have a small fraction of their workforce in the Granite State, but employ at least 150 people here.

Their average CEO pulls in over $13 million a year, more than 275 times the average worker.

The top paid executive among this group wasn’t even a CEO. Oracle Corp.’s Larry Ellison took a $16 million pay cut when he stepped down from that position to become the company’s chief technology officer, but he collected $63.6 million. The two co-CEOs, each who only worked half of the year, each made $53.2 million.

Ellison is paid more than 500 times more than the average worker at the company’s Nashua plant, or a little less than all of its 600 workers combined, and that workforce is relatively well compensated, judging by U.S. Bureau of Labor Statistics data.

The biggest discrepancy? That goes to Walmart, which employs nearly 8,000 people in New Hampshire (and 2.3 million nationally). Walmart recently announced that it will start its workers at $10 an hour, the average wage in the retail industry in New Hampshire. CEO Doug McMillon is paid nearly $20 million, nearly a thousand times as much.

Labor leaders have criticized this wage discrepancy for a long time. The AFL-CIO has featured it on an interactive website. (According to the organization’s interactive website, the ratio of CEO-worker pay at public companies in New Hampshire is about 100-1).

In New Hampshire, the union’s president – Glenn Brackett, who once headed the Communications Works of America local here – had a few choice words after learning that FairPoint Communications CEO Paul Sunu was paid $3.7 million last year, an increase of 57 percent over a two-year period, a period that included a bitter strike over wages.

Sunu’s pay is 46 times the average worker in that industry, where employees average $1,418 a week.

“That’s the top end of the workforce, so the ratio is even higher,” claimed Brackett. “What the CEO can provide is minuscule compared to their pay grade. The people who do all the work are the workers of the corporation.”

But she added: “I don’t think huge multiples are acceptable. People should strive for a multiple that reflects the value of employees’ input into whatever products and services are being produced, and 150 multiples don’t reflect that.”

Even shareholders are getting concerned – perhaps not so much with the pay gap, but with the seeming disconnects between pay and performance. This is most often expressed in nonbinding “say on pay” votes that were instituted in 2011 under Securities and Exchange Commission rules. Shareholders at less than 3 percent of firms voted against compensation packages when the rule first went into place, but by 2015 the rejection rate was up to 9 percent.

At Oracle, for example, the four top executives earned an average of $40 million a year, and the average board member received $780,000, despite a 9 percent decline in profits. A majority of shareholders voted against the compensation package – and Ellison controls almost a quarter of the stock.

There was only one other outright rejection of the executive compensation package at companies examined for this story: Nashua-based iCAD, a maker of cancer detection and radiation therapy systems, with about 100 employees.

The company, which lost about $40 million over the last three years – more than its annual revenue stream during the same period – paid CEO Ken Ferry $1.6 million last year, a 50.6 percent increase over the two-year period. Ferry’s compensation is about 3.8 percent of the company’s revenue, the highest percentage of any firm that NHBR examined.

In the last proxy vote, 58.7 percent rejected the pay package. To look at it another way, 22 percent of all shareholders (including abstentions and non-votes) affirmed the package. (At deadline, iCAD did not comment on the vote.)

How we got the numbers used

Estimating executives’ pay, especially in relation to other variables such as workers’ pay, is an inexact science, so the reader has the right to know where the numbers used in the stories and chart come from.

List of companies: The companies listed are publicly traded U.S. companies that are either based in New Hampshire or have 150 direct employees. National franchises are not included unless headquartered here. The “local” companies had at least 10 percent of their workforce in the state. The number of New Hampshire workers is from NH Business Review’s Book of Lists. The total workforce is determined from companies’ annual filings with the Securities and Exchange Commission.

Executive pay: The compensation package includes salary, bonus, stock awards, option awards, non-equity incentive plan compensation, the change in pension value and other items, usually perks like personal jet travel. Usually, the salary is a relatively small percentage of the package. The worth of the equity awards is dictated by SEC regulations. NH Business Review used totals from the latest proxy from the last fiscal year, which usually, but not always, ended on Dec. 31, 2015. Older proxies were checked only when necessary for top paid executive, almost always the CEO.

CEO-employee ratio: Starting in 2017, SEC rules will require that publicly traded companies disclose the ratio between the CEO’s compensation and the median salary of the company’s employees. Until then, such information remains proprietary.

However, the company discloses its Standard Industrial Code (SIC) with its SEC filings, which NH Business Review translated into a North American Industrial Classification System (NAICS), using a website called sicode.com. Tempered with some common sense, we determined the average weekly wage in those NAICS code in New Hampshire, when available, and nationwide when not. That average includes all levels in that industry, including CEO, so the ratios included are a conservative estimate, usually lower if the company used median wage. But pay scales within the same industry vary, and the ratios used in the article are a rough approximation.

‘Say on pay’: Federal law requires this nonbinding vote on executive compensation at least every three years. NHBR includes the vote following the latest proxy, so some companies either did not take a vote that year, or had yet to disclose one. The rejection rate is the percentage of “no” votes of those votes cast, and does not include abstentions and broker non-votes.

Revenue, profits: These are from the annual SEC filings that correspond to the same fiscal years as the proxies. Profits are the net earnings or net loss figure listed.

But there were other substantial no votes as well, such as at Precision Castparts Corp., the Portland, Ore.-based company that owns PCC Structural, a Tilton firm that employs 285 people.

Holders of about a third of Precision’s shares rejected an executive compensation packages that included $15.8 million for CEO Mark Donegan. Donegan’s pay went up 63 percent last year, despite an 11 percent decline in profits (though revenue did go up 5 percent)

And then there’s Sanmina Corp., a San Jose, Calif.-based company which employs about 200 workers at the Sanmina-SCI plant in Manchester.

About a fifth of shares rejected the compensation package for Jure Sola, the firm’s CEO and co-founder, whose pay increased 21 percent last year, when revenue declined 4.5 percent, although profits rose by nearly 7 percent. 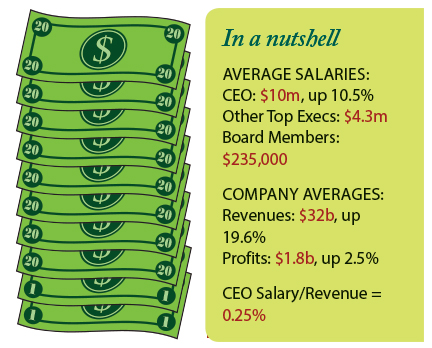 Closer to home, 11.5 percent of shares opposed Eversource’s compensation plan and 22 percent were against the executive pay package at Performance Sports Group and Extreme Systems.

Net earnings at PSG, the Exeter-based sports equipment manufacturer, dropped by more than 80 percent last year to $3.3 million, but CEO Kevin Davis’ compensation package was also cut by 52.5 percent, to $1.1 million, the second lowest of the companies examined.

However, in Extreme’s case, the combination of the compensation packages for Charles Berger and his successor, Edward B. Meyercord III ($3.9 million) was 55 percent more than the amount Berger received in 2014, even though the company reported losing $130 million over those two years.

Some analysts credit the “say on pay” votes for a drop in CEO compensation nationwide, either directly or though the shift to a greater reliance on performance- and equity-based compensation, combined with a relatively flat earnings year.

What will happen when companies have to also report the ratio of CEO pay to median employee salary, which should be revealed in the early proxy filings in 2018? Will that have any effect on executive or employee pay? Only time, and many board votes, will tell.

As for Stephen Theroux, it won’t matter. He will be stepping down following the sale of Lake Sunapee Bank to Maine-based Bar Harbor Bankshares, where last year CEO Curtis Simard earned a total of $828,631. That’s over $300,000 more than Theroux, but he would have been the second-lowest paid executive among New Hampshire-related publicly traded firms.

Click on the image below to see a pdf version of the highest-pad CEOs chart. 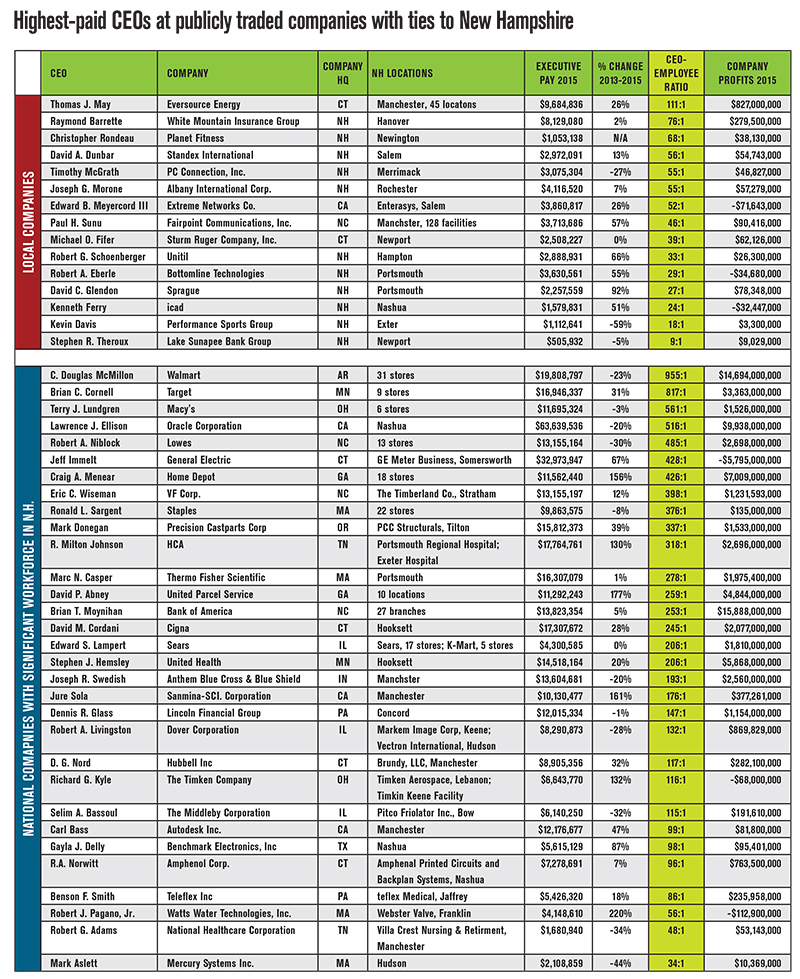 NH Business Review intern Sarah Rondeau contributed to the compilation of revenue and profits figures, as well as the number of a company’s worldwide employees.