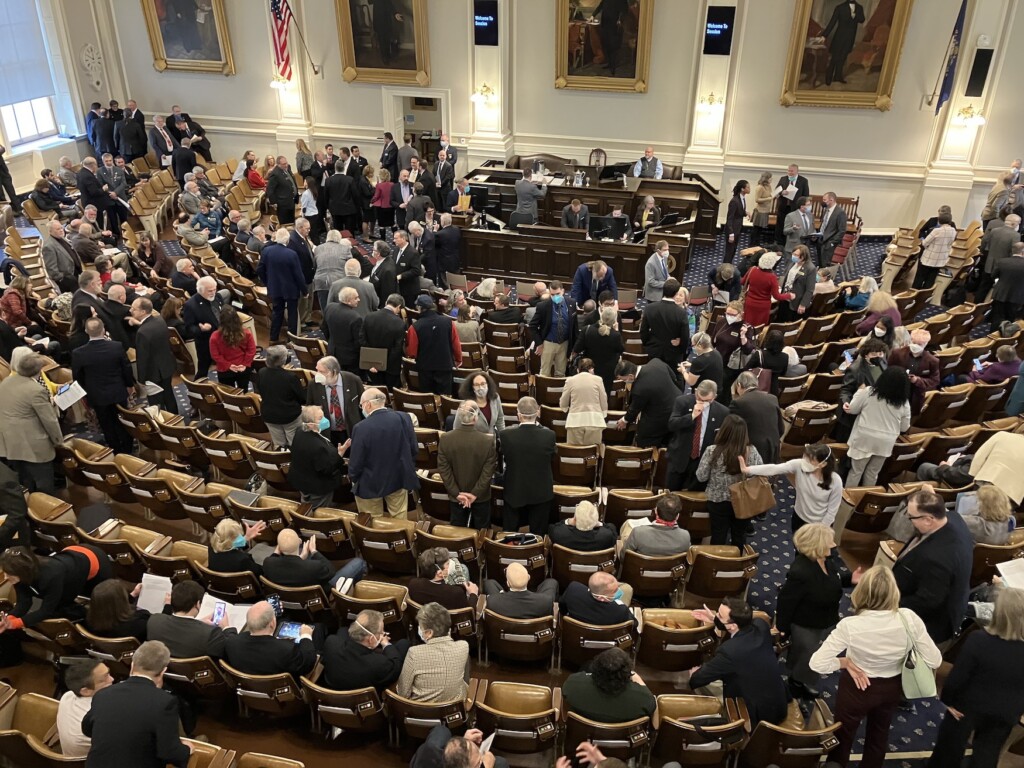 Members of the NH House gather ahead of the first day of the 2023 session on Jan. 4. (Ethan DeWitt/New Hampshire Bulletin)

There will ostensibly a big push for workforce housing this year in the NH Legislature. Senate and House Republican leadership have made it their top priority, with the speaker even setting up a temporary standing committee that will hold hearings on housing bills. But whether this will make a difference remains to be seen.

Meanwhile, Democrats are pushing a number of bills aimed at enhancing the right of tenants. There is even a proposal to allow local rent control, allowing municipalities to limit the size of rent increases and the notices prior to making them.

“You can call it rent control or stabilization, but it’s all about local control,” said Rep. Ellen Read, D-Newmarket. “We are experiencing a horrific housing crisis on the Seacoast and even for workers making well above the minimum wage, there is nowhere for them to live.”

Other tenant protections bills include one from Rep. Cam Kenney, D-Durham, who has proposed prohibiting discriminating against tenants with Section 8 vouchers, and another restricting evictions based on an owner‘s intent to renovate a property. Read has a bill that would require landlords wanting to sell a building to offer it to the tenants first, enabling them to form a cooperative, similar to the law governing the sale of manufactured home parks.

“We have a rash of predatory landlords that are purchasing property at inflated prices, specifically with the intent of increasing rent drastically, sometimes $1,000-a-month increases. Most of these landlords don’t reside in these towns anyway,” Read said.

Read also has bills that would allow tenants to terminate their lease without penalty if they need to move to escape an abuser or if they become disabled and can’t access their living quarters, one that would limit the cost of a rental application fees to $35 or the cost of a background check and a bill giving indigent tenants the right to free legal counsel in eviction proceedings, similar to the rights of an accused criminal.

“There do seem to be an unusually number of tenant rights bills, said Nick Norman, director of legislative affairs for the Apartment Association of NH, a landlords’ group. “Rent control is a bad idea. It’s been proven over and over again that it worsens the problem it is trying to control. Any idea that is restricting business is going to end up causing more harm than they are fixing. If you aren’t creating more housing, then you are looking at the wrong place.”

Norman said he was pleasantly surprised when he learned of another bill sponsored by Representative Read that would expand the law on accessary dwelling units. These are so-called mother-in-law apartments, though homeowners can rent them out to anyone. Current law requires that municipalities must allow ADUs, but there are restrictions. There can be only one per household, they have to be attached, and they can’t be larger than 750 square feet.

Read proposes allowing two ADUs per household, with only one being attached. She would expand the definition of attachment to include apartments in previous existing detached structures, like a garage and increase the allowable square-footage to 1,000. And one ADU (but not both) could include short term rentals.

Norman would have to look at the bill, he said, but he liked the concept.

Other housing expansion bills are similar to those in the past. One bill, House Bill 44, sponsored by Rep. Rebecca McWilliams, D-Concord, would require municipalities to allow homeowners to break up a home into four units if it is on municipal water and sewer – a similar bill was passed in committee last year but died on the House floor.

On the Senate side, Sen. Rebecca Perkins Kwoka, D-Portsmouth, is proposing two pieces that didn’t make it into the omnibus housing bill that passed last session. One would set up a Housing Champion Program that would reward municipalities that are more open to allowing affordable housing. The other would create housing opportunity zones, similar to economic development zones.

Senate President Jeb Bradley, R-Wolfeboro, also pointed to other initiatives: more money for the Affordable Housing
Fund in the budget, with an emphasis on constructing more beds for homeless people as a onetime expense, and help with expanding water and sewer infrastructure that would allow more multifamily apartments.

Lawmakers are finally “recognizing that the lack of inventory is a drag on the economy of this state,” said Bob Quinn, CEO of the NH Association of Realtors. “Business can’t find workers who can’t find a place to live.”