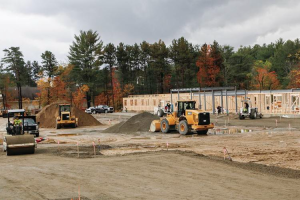 North Conway is a destination resort struggling with traffic, lack of workforce housing and maintaining its rural charm. The question has been floated: Is it time for a moratorium on commercial hotel construction?

As Conway — of which North Conway is part — prepares to hire a consultant to update the master plan, and with several hotel projects under construction and others approved, that idea was floated recently by Selectman Steve Porter, a longtime past planning board chair who now serves as representative to the planning board.

At the selectmen’s Oct. 11 session, Town Engineer Paul DegliAngeli said he and Planning Director Jamel Torres are looking at having the impact of development studied in the master plan update. He also noted several hotels with 450 rooms combined have been approved in town within the past two years.

“One of the things Jamel and I have written down for study is whether it is time here in Conway to place a moratorium on certain industries,” said DegliAngeli, citing lodging in particular.

That led Porter to raise the issue at the planning board’s Oct. 13 work session.

“Having been raised here, I can honestly tell you, from 1958 to 2022, I have not been impressed with how this town has grown,” said Porter. “It’s not the same valley it was and that kids thought it would be.

“It’s pretty hard as a parent having kids that have to move out of the valley because there’s no opportunity. As elected officials, it’s time for us to grab the stirrup and try and slow things down, and I know other towns such as Freeport (Maine) and other places out west have done the same because things have gotten out of control,” he added.

He said the issue of adding more hotels in particular but other businesses in general is tied to the lack of workforce housing in the community — although there are a few projects that have been approved, such as Avesta Housing’s 156-unit River Turn rental project now under construction in Conway.

“Once we get more housing in place, we can look at it differently,” said Porter at the Oct. 13 meeting’s work session, during which the topic came up when discussing updates to the zoning ordinance with town attorney Jason B. Dennis of Hastings Law Office of Fryeburg, Maine.

Dennis said he would study the legal ramifications of moratoriums and get back to the board.

In a follow-up interview, Porter said that, if enacted, a moratorium on new hotels could be in effect for two years.

“We are talking hotels because that is where we have seen the flurry in recent years, as we’ve approved the 114-room Cambria hotel project at the former Junge’s site now under construction; the 90-room Hilton Garden Inn at the former Packer’s Gallery site; and the three-story, 70-room Viewpoint North Conway at the Intervale Motel,” he said.

That follows the completion in August 2021 of the 80-room Home2Suites by Hilton in North Conway.

The moratorium he and DegliAngeli are contemplating would allow for replacement of structures that were torn down or those that were damaged by fire, such as the Red Jacket Mountain View Resort.

“A place like the Red Jacket would be grandfathered,” said Porter. According to the owners of the Red Jacket, plans are progressing for a reopening, with no date given.

Asked about the proposed moratorium, Josh McAllister of HEB Engineers said he does not necessarily see a temporary halt on commercial hotel construction leading to more residential units being built.

Ben Colbath, chair of the Conway Planning Board, said, “Other places like ski towns out West have ‘mixed use,’ where, as a condition of their approval, they might require, say, 12 housing rental units, and we could look into that. Had we had such an ordinance in place, for instance, we could have required rental units above the Settlers Streetside stores or for the Friendly’s site above the proposed new restaurant and retail building.”

Currently, the rental vacancy rate is less than 1 percent in Conway.

One reason for the housing shortage may be the explosion in short-term rentals, which took places that were previously rented to workers out of the long-term market. The town is currently embroiled in a lawsuit over its short-term rental ordinance.

But progress is being made on the housing front: