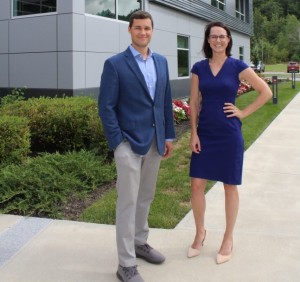 Jennifer Stebbins Thomas, shown here with her brother John Stebbins, took over the S&S Hotels suit after the death last year of their father, Mark Stebbins.

A New Hampshire-based hotel group’s case against its insurers over Covid-related losses is heading to the NH Supreme Court, and it could be one of the few such cases filed around the country in which the insured has a chance to win, both because of the specific policy involved and a seven-year-old Supreme Court decision relating to cat urine.

Hotel management company Schleicher & Stebbins (S&S), which has 23 properties, filed the suit in April 2121. The hotels – which include a Residence Inn, Hampton Inn and AC Hotel, all in Portsmouth, and the Hilton Garden Inn in Lebanon – had paid $1 million for up to $150 million in “all risk coverage,” which includes business interruption insurance. The hotels claim they lost more than half that amount as of November 2020. But when they tried to collect, eight insurance companies denied the claims because the virus didn’t damage the property and because of a microorganism exclusion, which insurers claimed extended to the coronavirus.

The hotel group won the first round last June 21 when Merrimack County Superior Court judge John C Kissinger Jr. granted summary judgment against seven of the hotels. The judge issued that decision days after Mark Stebbins, founder and part-owner of S&S died, leaving it to his children to carry on the battle. This Jennifer Stebbins Thomas  was more than willing to do.

“My dad was so passionate about this, not just for our hotels, but for all those who don’t have the resources to go after the insurance companies,” said Stebbins Thomas. “But we do have those resources. We paid millions to make sure we could have the best insurance possible, and then when we finally need them, they say, ‘Sorry, this doesn’t count.’”

Normally the next step would be to litigate over the damages, and only after they were awarded would an insurance company appeal. But in March the insurers asked – and Kissinger granted – permission for the case to straight to the Supreme Court back in March. The court agreed to accept the case, and both sides have been filing briefs ever since, with the last due in mid-July. In additional to the parties involved, the American Property Casualty Insurance Association, the NH Lodging and Restaurant Association and the NH Medical Society have also weighed in.

This is where cat urine case comes in, since its applicability is one of the main questions before the court.

In a 2015 decision, the owners of a condo in Epping claimed that the odor from urine in another unit made theirs uninhabitable, a view the court agreed with in Mellin v. Northern Security Insurance Co., primarily because the state Constitution upholds the rights of private property – especially of the owner to enjoy the use of that private property – more than most states.

In their appeal, insurers argued that most states (and the federal courts) have sided with them – that it is the property that is being insured not so much its operation. Insurers will reimburse for lost business if covered under the policy, but only if it is caused by physical damage to the property.

A virus, they argued, doesn’t physically damage the property. It can be easily cleaned or vented away. The hotels were able to use the property even during the initial months of the pandemic, to house essential workers and those quarantining during the pandemic, even though it was not the “ideal use” of the property, argued David Vicinanzo of Nixon Peabody, in an amicus brief filed in May on behalf of the casualty insurance association.

Some 600 courts have ruled in similar cases in favor of the insurance industry, Vicinanzo wrote.

A contrary ruling, he noted, “would leave policyholders and insurers without certainty regarding the scope of coverage afforded, and it would burden courts with the litigation.”

It also would put the entire insurance industry at risk, he added. Small business losses related to Covid-19 have been estimated at between $255 billion and $431 billion per month, while the total property casualty industry is about $800 billion. Vicinanzo noted that the federal government has spent trillions to bail out businesses.

“Funding for businesses in duress should, and did, come from government-backed pandemic recovery solutions, not efforts to force property insurers to pay for economic losses,” he said.

The defendant insurance companies’ brief de-emphasized the impact of Covid.

“Plaintiffs introduced no evidence that the Coronavirus can harm property, and common-sense dictates that it cannot. No one would claim that the presence of the common cold virus (another coronavirus) on furniture is “direct physical loss of or damage to property,” according to a brief signed by nearly a dozen attorneys.

The common cold allusion was a “slap in the face,” said Stebbins Thomas. “You all remember what that time was like, how scary it was, how everything was shut down. And to have that dismissed by the ‘oh, it wasn’t too bad.’ That is frustrating.”

The insurers’ briefs prompted the NH Medical Society to file its own on June 23, even though they normally don’t get involved in property insurance matters.

The insurers’ “scientifically unsupported statements minimizing the severity of Covid-19 and falsely proclaiming SARS-CoV-2 can be easily removed by surface cleaning or dissipation … are, at best, scientifically inaccurate, and frankly, are more accurately described as ‘junk science,’” the medical society’s says. “The common cold has never killed one million Americans or over 2,570 Granite Staters in the space of two years as Covid-19 has done.”

The hotels acknowledge that most cases around the country have gone in favor of insurers, but this case is special, they say. For one, New Hampshire is an exceptional state because of the Mellin decision.

“If the presence of cat urine odor can trigger coverage, then the presence of a dangerous and often deadly virus does for sure,” according to a brief co-authored by Marshal Gilinsky, a New York attorney, and Michael O’Neill of Rath Young & Pignatelli, in a brief filed June 24.

The Mellin decision, they wrote, is consistent with “New Hampshire law, which goes further than other jurisdictions in protecting private property rights from harm and interference.”

The hotels also had an exceptional “all risk policy,” which unlike 87 percent of policies in the United States does not include an exclusion for virus and pandemic. Such exclusions were written into most policies since the first major SARS outbreak 20 years ago.

The insurers knew about the Mellin ruling, and could have written restrictions and exceptions into their policy, but they did not, argued the hotels’ brief.

Insurers, however, maintained that they did, pointing to an exclusion clause pertaining to mold and mildew and other microorganisms, which they say encompasses virus, whereas the plaintiffs maintain that it does not.

The hotel brief also takes issue with the scenario that the insurance industry could collapse under an onslaught of litigation should the insurers lose this case.

First, most policies now have virus and pandemic exclusions, and most don’t provide business interruption coverage. And most companies don’t sue. In New Hampshire, there have only been two other Covid -related business interruption suits, and both are in the federal courts, said the hotel brief. And given that most policies have a two-year appeal limitation, there are unlikely to be many more.

“When property is impacted in a way that interrupts operations and the ability to drive revenues – whether from a massive earthquake, offensive odors, or a microscopic but deadly virus – the ‘physical loss of or damage to property’ is the same and is equally insurable,” summed up the hotel brief.

Oral arguments are expected in the fall, with a decision by the end of the year.