To do Curtis Lancaster’s job, you need to be a little paranoid, he said.

Lancaster works for Dartmouth-Hitchcock Health, a system that has more than 1,800 providers across the state and is the largest private employer in New Hampshire.

He is responsible for making sure all of the buildings, including five hospitals, are stocked with anything and everything they might need – every piece of linen that touches a stretcher, every glove or mask donned by a doctor, every contractor that shovels snow or washes laundry. 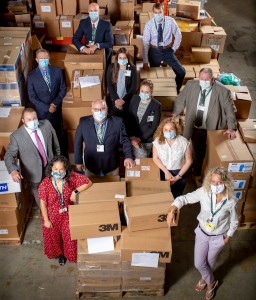 ‘Everywhere I’ve been, I’ve tried to prepare for whatever the next thing was,’ says Curtis Lancaster, who oversees Dartmouth-Hitchcock Health’s supply chain team.

The supply chain team is constantly bringing new supplies to the warehouse, shuttling supplies to hospitals, and picking up soiled sheets (in a year, they clean about 4 million pounds of laundry).

As vice president of the supply chain, Lancaster’s job is to anticipate any event that could jeopardize the stockpile of supplies. Or, as he puts it, “scan for the boogeyman.”

Each product is manufactured and shipped from various parts of the world, creating a seemingly infinite number of global events that could deplete essential materials.

In the early months of Lancaster’s debut in the healthcare industry at the United Parcel Service, SARS made national headlines. UPS desperately scrambled to find N95 masks for their employees. At that point, Lancaster didn’t even know what an N95 mask was.

“That sort of left an indelible mark on my psyche,” he said. “Everywhere I’ve been, I’ve tried to prepare for whatever the next thing was.”

Lancaster had been anticipating some disaster that would put a strain on his stockpile.

He didn’t know exactly what form the disaster would take. It could be a chemical attack, a natural disaster, or – his worst fear – a disease.

To prepare, he made his team do extra emergency drills to make sure they knew what supplies they had stocked inside and out.

He also partnered with a resiliency mapping service that constantly sends notifications to his phone about world events that could have an impact on his supplies – a new CEO at a manufacturing company, a volcanic explosion, a worker strike. He then matches these events to an expansive database of where his supplies are manufactured to see if it will impact his hospitals.

Lancaster sees the world in terms of medical supplies. Every news story can be traced back to an item in his warehouse. For example, any current even involving Thailand, one of the few countries that have rubber trees readily available, makes Lancaster immediately think about surgical gloves.

“When I see something in Thailand, I think ‘holy smokes, are my gloves OK?’ ” he said.

Yet, for even someone as vigilant and paranoid as Lancaster, Covid-19 was a shock.

“I knew something was going to happen and I wanted to be prepared and was not,” he said. “Nobody could have anticipated what happened.”

On Jan. 3, months before ‘Covid-19’ was in the public’s vernacular, Lancaster’s phone buzzed with a notification – there was an emerging pneumonia-like virus spreading through Wuhan, China.

He and some of his supply-chain colleagues were worried, as many of their supplies, like hospital gowns, were manufactured in the city. Furthermore, this was happening right around the same time as Cardinal Health, a large healthcare supplier in the United States, recalled several products.

Lancaster began strategizing and planning how he would find new suppliers. Slowly, an even more grim possibility dawned on them.

“We noticed, holy smokes, the Chinese New Year is happening,” he said. “Wouldn’t it be horrible if this virus spread?”

Lancaster almost immediately knew what the shortages were going to be – N95 masks, isolation gowns and gloves. He started stocking up.

Quickly, his usual providers started becoming overwhelmed with orders and Lancaster was forced to scour the market to find new providers he could trust. Even if he successfully ordered materials, there were often delays at airports and ports that extended delivery times.

“What would be a normal one=week delivery time started to be one month or two months,” he said.

Supply chain management also started receiving emails from suppliers they had never worked with before, asking for up-front payments for PPE. Lancaster said he received several hundred of these emails, sometimes with counterfeit FDA certificates. In one case, a supplier offered N95 masks with the wrong type of ear strap, a telltale sign of a fake product.

“You start dealing with less-than-honest people,” he said.

It was sometimes difficult to distinguish them from legitimate firms, as some companies were new to the health supply industry and needed money up-front to order the supplies themselves.

The product prices were also thrown into flux. Products Lancaster might ordinarily pay 60 cents for, were costing upwards of $10 apiece.

Faced with shortages and delays, some hospitals in New Hampshire, like Concord Hospital, started bartering for supplies.

Jodi Panzino, director of supply chain management at Concord Hospital, said that every week the medical supply distributor who supplies to the hospital and several others in the area sent an email to all of its clients, asking what they had shortages of, and what they had to offer. Supply chain managers responded, offering to trade disposable stethoscopes for goggles or surgical masks for isolation gowns.

“Everybody is trying to get supply to make sure their hospital is well established but no one is out for themselves,” Panzino said.

The pandemic has changed her hospital’s supply chain philosophy, she said.

Unlike, Dartmouth-Hitchcock Health, Concord Hospital does not have a warehouse to hold a stockpile of supplies. The hospital orders supplies as it needs them and they are shipped to the facility every weekday morning.

But the pandemic has exposed real problems with that system, the most glaring of which is the supply chain isn’t always stable.

“If you place an order, you might be placing an order for October or November delivery,” she said. “Not for tomorrow, like we’re used to.”

Concord Hospital is now changing its system to keep a stockpile of PPE. She knows several hospitals that bought warehouses for this purpose as well.

Lancaster said he is grateful New Hampshire was not an early hotspot for Covid-19. It bought hospitals time to construct a new supply chain and stock up on essential items – Dartmouth-Hitchcock Health didn’t face any shortages that significantly impacted their services.

For the most part, the scramble for supplies has eased as the market for N95 masks and other PPE has become less competitive. Some raw materials are still high demand.

“From our known world, yes things are easier,” he said.

The known world is not Lancaster’s concern, though. He is already onto the potential problems of the future, as is only appropriate for a boogeyman scanner.