Concord Hospital in deal for its acquisition 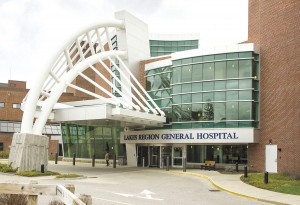 At the same time, Concord Hospital has accompanied the bankruptcy filing with a bid to acquire the two hospitals for $30 million, along with ambulatory sites in Belmont and Meredith. Neither Advanced Orthopedic Services Specialists nor the Laconia Clinic, which have contractual rather than ownership relationships with LRGH, is part of the bid.

Kevin Donovan, president and CEO of LRGH, said, “We have known for some time that our current reality is not sustainable for the long term, and minor fixes will not get us where we need to be.” He added that operating losses of $1 million a month arising from the coronavirus pandemic simply exacerbated financial troubles that have dogged the corporation for some time.

“Before Covid we had a smoldering fire and when Covid came along, it poured gasoline on it,” Donovan said.

With a high proportion of Medicaid and Medicare patients, relatively low reimbursement rates have weighed heavily on operating revenues, diminishing LRGH’s capacity to manage its outstanding debt of some $111 million. Donovan explained the hospital was challenged to trim operating costs while at the same time maintaining services and sustaining revenues all under the shadow of debt.

Meanwhile, LRGH’s crippled financial condition has hindered efforts to overcome its plight through merger or acquisition.

For decades, LRGH and Concord Hospital have enjoyed a longstanding collaborative relationship in the practice of medicine, particularly in cardiology and oncology. After LRGH eliminated maternity care in 2018, patients turned to Concord Hospital for labor and delivery services and last year for prenatal care as well.

During the past year, the two hospitals have explored the prospects of combining their operations.

In a statement Robert Steigmeyer, president and CEO of Concord Hospital, said, “the board of directors and leadership at Concord Hospital determined that by acquiring LRGH’s hospital assets in Franklin and Laconia, we are in a position to build a sustainable community health system for the Capital and Lakes Region.”

LRGH’s debt, a $111 million mortgage loan on its facilities held by Key Bank and guaranteed by the U.S. Department of Housing and Urban Development, is the outstanding issue to be resolved by the bankruptcy proceedings.

Donovan stressed that throughout the bankruptcy proceedings, both hospitals will continue to operate as usual with no interruption in service. Likewise, he said, there would be no layoffs among the 1,400 full-time and part-time employees at LRGH. Nor would there be any reduction in their benefits.