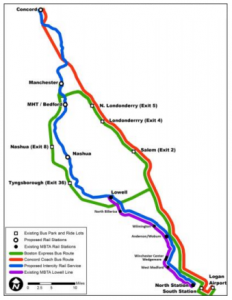 U.S. Sen. Maggie Hassan, D-NH, has joined with South Dakota Republican Sen. John Thune in sponsoring a bill that would beef up and streamline a federal program that provides loans to help develop passenger and short line rail projects, such as the Capitol Corridor Project that would connect Manchester and Nashua to Boston via commuter rail.

Specifically the bill’s key provisions are:

“Passenger rail can provide a significant economic boost to Granite State communities, and as Congress considers future transportation and infrastructure packages, it should prioritize passenger rail efforts,” said Hassan, who has longed work to promote the Capitol Corridor Project, including during her time as governor when she signed into law a study that helped advance the project. As senator, she also recently introduced legislation that would increase funding for the federal Capital Investment Grant program and prioritize projects connecting smaller cities to existing passenger rail in larger cities, with the goal of making it easier for New Hampshire to secure the grant funding needed to move forward with passenger rail.

A project linking central and southern New Hampshire to Boston has long been a priority of the business community and many elected officials in Nashua, Manchester and Concord.

Among the supporters has been Nashua Mayor Jim Donchess, who praised the RRFIA. “Passenger rail connecting Nashua to Boston will greatly help our people and economy,” he said. “Economic investments like passenger rail are more important than ever as we consider long-term recovery from Covid-19, and I am glad to see Senator Hassan’s bipartisan push to make it easier to fund passenger rail.”

Similarly, Manchester Mayor Joyce Craig voiced her support for the measure. “Manchester residents and businesses have advocated for the expansion of commuter rail for years,” she said. “Additional funding for projects like the New Hampshire Capital Corridor would help communities like Manchester expand economic development opportunities, attract a youthful workforce and increase accessibility to employment.”