‘There’s no clarity here other than it’s scaring people’ 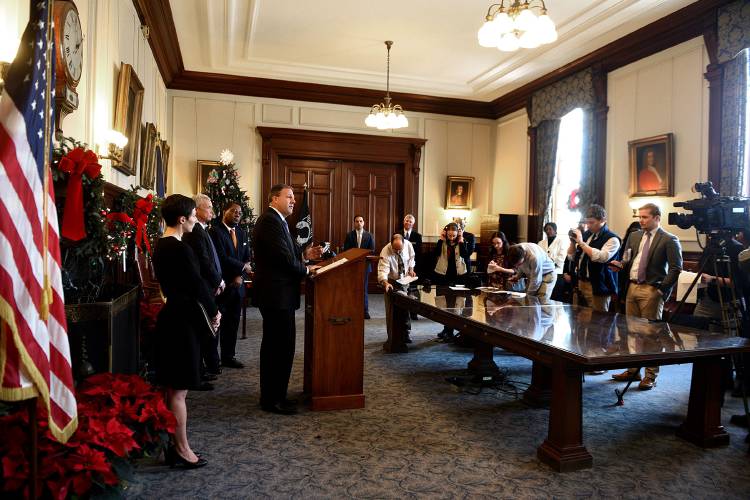 The state budget provision that opponents say puts a chill on important conversations about race has been law for two weeks, but community members are still looking for guidance on what they call unclear language.

Educators and civil rights activists, among others, say as they await more information from the state, they are concerned the law is already leading to self-censorship in school curriculums, workplace diversity training and police implicit bias classes.

Ahni Malachi, chair of the governor’s Advisory Council on Diversity and Inclusion, said conversations are ongoing with Attorney General John Formella and the Department of Justice to develop guidance for state agencies, adding that the legislation will “not prohibit necessary conversations.”

“These conversations are still going on at the state level, so we will have much more information to share later on,” Malachi said in an email.

After initially stating he would veto earlier drafts of the legislation, Gov. Chris Sununu signed the budget into law at the end of June, along with the provision commonly referred to as “divisive concepts.” The move prompted the abrupt resignation of more than half of the Diversity Council, the former members citing concerns that the bill is fundamentally at odds with the Council’s mission to combat inequity and discrimination.

The law specifically prohibits teaching in schools or governmental agencies the idea that an individual is racist, sexist or otherwise oppressive by virtue of their age, sex or any other identity — “whether consciously or unconsciously.”

Supporters of the bill say the provision will strengthen New Hampshire’s race relations and protect everyone — including white people — from discrimination in schools and public workplaces.

With language in the budget that says violation of the law could result in “disciplinary sanction by the state board of education,” educators are carefully considering the bill, especially in public schools where teachers are crafting their curriculums for next fall.

Morse said the prevailing concern among superintendents across the state is what the bill means for educators, academic freedom and teaching “the true history of racism.”

“Certainly, racism is one of the issues that has haunted our country from its inception,” he said. “To grow past that, we have to create an atmosphere where we can learn from the past and grow and become better people.”

As they await more information from the state, Oyster River administrators are looking for guidance from their own school attorneys, Morse said.

“Everybody is waiting to learn more about what this bill means. It’s hot off the presses. There’s tremendous concern,” he said. “There’s no clarity here other than it’s scaring people.”

Devon Chaffee, executive director of the American Civil Liberties Union of New Hampshire and also a former Diversity Council member, said the ACLU is going to be ready to support educators as much as it can.

“Of course, we’re all really awaiting the guidance from the state to see if it provides any type of clarity about what this law does and doesn’t do,” Chaffee said.

Bow-Dunbarton School District Superintendent Dean Cascadden said that, despite feeling concern that the legislation will have a chilling effect on certain topics, he’s not worried his district’s curriculums will be in violation of the law.

“I’m a little less concerned after reading the text,” Cascadden said. “I’m not really sure now what the bill is trying to accomplish.”

Cascadden’s school district has an equity and diversity program that shows students “windows and mirrors” — through which children can reflect on their own culture and identity, as well as see and accept the experiences of others.

“I think people don’t want their children indoctrinated, but I don’t think we do that. I think we try to ask critical questions,” Cascadden said. “We ask people to examine their assumptions, examine what their background is and then ask the question, ‘This is another human being. Am I treating that person fairly?”

Dottie Morris, chief officer of diversity and multiculturalism at Keene State College and the former vice chair of the Diversity Council, said while she thinks the legislation will have a larger impact on K-12 schools than on higher education, it could have an effect on diversity training for faculty and staff.

“There’s a lot of anxiety and confusion,” Morris said. “I keep asking for clarification, and I don’t have that. I’m not sure what impact it will have on colleges and universities.”

Next to the uncertainty surrounding the bill, Morris said one of her greatest concerns is the legislation’s potential impact on conversations about race.

While on the state’s Diversity Council, Morris and the other members held about a dozen listening sessions throughout New Hampshire, hearing from different populations about their experiences with discrimination. One of the most common pieces of feedback the council received was that there needs to be more diversity education, Morris said.

“A lot of people were pushing education,” she said. “They would talk about their experiences and how painful they were, and they saw it as a resolution to be able to have some of these conversations about race and racism and all of the other isms that are out there.”

Joseph Lascaze, who helped shape and lead cultural diversity classes for incoming police officers through the Police Standards and Training Council this year, said he feels hesitant to continue the classes in light of the new law.

“It’s just a wet blanket,” Lascaze said. “There really is no clarity whatsoever on whether or not this training that we are doing that is so critical for New Hampshire law enforcement is allowed to continue.”

Lascaze’s classes included discussion of implicit bias and racial profiling, and highlighted the experiences of diverse people in New Hampshire, including people of color and members of the LGBTQ community.

“(The law) gives me serious pause to continue doing this work because if there is one member of law enforcement who does not agree with this training — to my understanding — this opens myself or PSTC up for lawsuits,” he said. “I do not want to be penalized or punished for sharing experiences either that I’ve been through or experiences of other Black and brown people in the communities in New Hampshire.”

Lascaze, a smart justice organizer for the ACLU of New Hampshire, is also a member of the governor’s Commission on Law Enforcement Accountability, Community and Transparency or LEACT.

Earlier this month, members of LEACT requested an emergency meeting to discuss the “divisive concepts” legislation. That request was denied by Attorney General John Formella – who helped draft the language in the law – who said the matter was not within the commission’s purview.

“Our legal team is currently reviewing the language. We’re still trying to make sense of it all,” Lascaze said. “The problem is that this law is already in effect. That is the problem. That means that there are conversations that are coming to stand stills right now in New Hampshire that could really benefit the people in our communities. While this law is in effect, we have to sit back and wait to see how this actually affects people, and I think that that’s backwards.”

Multiple organizations – including the state Business and Industry Association, New Hampshire Businesses for Social Responsibility, the Office of the Child Advocate, the New Hampshire Providers Association, and numerous school boards – have opposed the law.

BIA came out against the legislation in April when the provision was first added to the budget bill, citing concerns that it would ban diversity training among businesses that contract with the state. The language that included state contracts has since been removed.

“The BIA is opposed to it still, and I know that many private sector companies who were initially concerned remain opposed,” said David Juvet, BIA senior vice president of public policy.

While businesses are no longer concerned the provision will directly affect them, Juvet said the fear is that it could deter businesses from relocating to the Granite State, particularly minority entrepreneurs.

“I think it could impact millennials wanting to relocate to New Hampshire because I think as a general rule they have heightened sensitivity to diversity and systemic racism,” Juvet said. “This type of language is not helpful in demonstrating that New Hampshire is open to those types of discussions.”