41% of localities have no women in top leadership, says NH Women’s Foundation report 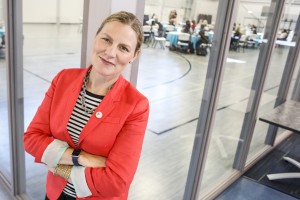 In a state that boasts many “firsts” for women in elected office, it might be shocking to learn that 41% of New Hampshire select boards have zero women.

A new Gender Matters report from the New Hampshire Women’s Foundation details a significant gender gap in elected representation for women at the local level. In 2020, the organization surveyed all 221 towns and found that 37% of the 1,642 people serving on school and select boards are women and just 29% of towns have achieved gender parity or majority women. Data regarding city councils and school boards is forthcoming.

“More diverse governing bodies make for both richer conversations and more equitable policies being passed,” says Tanna Clews, executive director of the New Hampshire Women’s Foundation. “To know that 41% of towns do not have women on their executive level leadership means that they’re not having a seat at the table – they’re not able to participate and share their experiences.”

Kelly Boyer – who in 2018 became the first selectwoman elected in Goffstown in 10 years – says, “So often women are intimidated by politics because they’re pushed away from feeling that’s something they can do but there are so many smart, capable women who can and should be serving in their communities.”

The Women’s Foundation hopes voters look up the data in their town and use it to inform their votes in this week’s municipal and school elections.

Since the 19th Amendment was ratified in 1920, women’s participation in state government has ebbed and flowed, starting with New Hampshire’s first women elected to the House of Representatives in 1920, the first year they were eligible, Jessie Doe and Dr. Mary Farnum.

New Hampshire was the first state to have a woman serving as governor, Senate president and speaker of the House simultaneously. The New Hampshire Senate was the first legislative body in the nation to have a majority of women serving. The Granite State is the first to have an all-female congressional delegation. Additionally, New Hampshire elected the first woman governor to become a U.S. senator, Jeanne Shaheen, as well as the second, Maggie Hassan.

Currently, however, women do not have gender parity in the New Hampshire House, Senate or on the Executive Council.

According to the NH Women’s Foundation, data at the local level has not previously been collected or tracked. It’s hoped hope this report will serve as a benchmark to measure progress in the future.

“Without exception, New Hampshire has broken a lot of records. And it isn’t just because there are a few wildly talented and very ambitious women who can get themselves elected. Women bring a really holistic view of what the community needs. That has really been borne out by the pandemic and we need women at the table, especially in local government, as we rebuild,” says Exeter Select Board member Molly Cowan.

Crystal Paradis, the organization’s director of strategic communications & community engagement, says the foundation will use this data to inform expanded municipal training in their Women Run! program, a nonpartisan effort to empower and train women to run for office at the state and local level.

Women in New Hampshire actually achieved limited suffrage prior to the 19th Amendment. In 1871, New Hampshire women became eligible to serve on school committees, and in 1878, they won the right to vote in school elections. A similar effort to enfranchise women in municipal elections was defeated in 1887.

One hundred and fifty years after women could serve on school committees, they have parity on school boards – with 51% of members across the state being women.

But just 22% of select board members are women.

“It’s important to understand that women being able to get involved in town and city governance lagged behind being allowed to be a part of school governance,” says Margaret Byrnes, executive director of the NH Municipal Association.

“This may be a bit of a stereotype, but I think we’re seeing it play out, which is that women are traditionally very involved in the upbringing of their children and involved in schools,” adds Byrnes. “Perhaps that personal experience gives them both the confidence and the interest in being part of a school board.”

Nelson School Board member Kelly French is a mom who got involved in school district governance 20 years ago, when her kids were school-aged.

“I started when my kids were in elementary school and now I’m a grandmother,” French says. “I think the perspective of being a mother is important.”

In 2017, Gerri Cannon, who had children in another school district, was encouraged to run for the Somersworth School Board.

“I didn’t think I had the qualifications to run for school board; I think that applies to being a transgender person as well as being a woman. I was scared. I was skeptical I could even win a seat, so why should I bother?” Cannon remembers. “Sure enough, I won by six votes.”

Subsequently, Cannon has been elected to another term on the school board and to the New Hampshire House.

Some women in office, however, have faced questions and preconceived notions about their capacity to serve as a parent. One of those moms is Lovey Roundtree Oliff, an Exeter Select Board member elected last year.

“People will still ask, “How do you have time to do this? Who is watching the kids?” And I’m like, “The man who helped make them…” It’s deeply embedded in people – not just men,” she says. “If you want to do it, you’ll find a way.”

As the first Black woman to be elected to Exeter’s Select Board, Roundtree Oliff says some people questioned what she – a Bowdoin and Harvard grad who has worked in finance and development and previously served on her school district’s budget advisory committee – had to add to the conversation, too.

“You can’t be dismissive just because I’m leading with an important factor, which is that I am the new face of New Hampshire. The backlash that came, and comments people posted, were horrific,” Roundtree Oliff recalls. “Change can be very difficult for those who are in a comfortable position. Telling people they have to step back to allow others to have a voice can definitely ruffle some feathers.”

While Boyer was running for office in Goffstown, she says the fact that she was a woman, gay and young all became a point of conversation.

She says, “It’s important to have visibility and to have different perspectives and a good representation of what our population actually looks like, but it also shouldn’t be the basis of the conversation for why I am a good fit for this job. Part of me wants to empower women to run for office so that is not something that’s unique. This shouldn’t be the exception.”

Byrnes believes even simple things, like the title of a board, can foster increased diversity in local office.

“Towns are moving away from selectmen and board of selectmen and making conscious decisions to refer to it as the Select Board,” Byrnes says, adding that the Municipal Association has worked to adapt their own publications. “Some people may think it is a silly thing to focus on, but the word “selectmen” reflects the fact that only men were able to run.”

In 2019, Webster became the first New Hampshire Board of Selectmen to have all women members. They promptly changed their title to select board.

Webster Select Board Chair Chris Schadler notes, “Having a board of selectmen would have been inappropriate. The time for calling boards ‘whatever-men’ – selectmen, firemen – has passed because women are doing everything.”

“I know there are two schools of thought, but I do feel it’s just a title,” says Drew. “I’m extremely comfortable in that the word ‘man’ in so many of these titles is because we’re part of mankind, and women are equally part of mankind.”

“I think we should do whatever we can to make politics more accessible, especially to people who don’t often have a seat at the table,” Boyer says about Goffstown’s transition from Board of Selectmen to Select Board.

Roundtree Oliff adds it’s also important for those currently on boards to open opportunities up to people who should be involved – including providing child care for deliberative sessions and annual meetings to ensure parents and caregivers can participate.

“It’s not rocket science,” says Roundtree Oliff. “If you want things to get better, people have to put in the work. And if we don’t do that, then shame.”

Adds Cannon: “For someone who hid in the shadows for so long, like a lot of other women, I didn’t want to become a public person because it would draw attention. And now I’m glad I am, to prove to people and people of diversity, it’s valuable.”

Editor’s note: Sara Persechino currently serves as Hopkinton Town Moderator, a nonpartisan position, and previously served on her town’s select board. Editor’s note: This story was co-published by NH Business Review and InDepthNH.org.