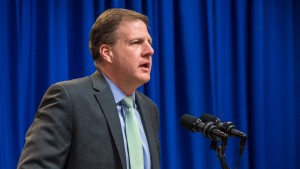 Gov. Chris Sununu’s new Housing Relief Program will provide one-time grants of up to $2,500 to renters.

Gov. Chris Sununu on Thursday yesterday announced that the moratorium on initiating eviction and foreclosure proceedings will be lifted July 1, and at the same time he allocated $35 million in federal CARES Act funding to help households suffering from foregone revenue or increased expenses to pay past-due rent.

Since April, New Hampshire landlords and housing advocates have warned that delinquent rents threaten to put tenants at risk of eviction and homelessness while sapping the cash flow landlords require to service mortgages, pay taxes and maintain their properties. To ensure the housing security of renter households and forestall the cascading effects on property markets, landlords and housing advocates alike have called for rent stabilization programs.

Although households have been buffered by enhanced unemployment benefits and personal stimulus checks from the federal government, losses of jobs and income have put many tenants behind in their rents.

Dean Christon, CEO of the New Hampshire Housing Finance Authority recently told the Governor’s Office for Emergency Relief and Recovery that rental delinquencies range between 10% and 20% and expressed concern that “these numbers will continue to grow.”

Even in the best of times, financial and housing insecurity is common among New Hampshire renters, whose median income is less than half that of homeowners. Economist Russ Thibeault of Applied Economic Research, has calculated that 44% of all renters are “cost-burdened,” paying more than 30% of their income in rent.

According to Christon, renters are twice as likely as homeowners to have lost work or income.

The governor’s Housing Relief Program, announced on Thursday, will provide one-time grants, not to exceed $2,500, that may be applied to arrearages dating from April 2020 as well as to other one-time housing expenses that, if left unpaid, could place the housing of individuals or families in jeopardy.

The grants are contingent on loss of income or increased expenses incurred as the result of Covid-19 and are targeted to households able to maintain their housing without assistance beyond the grant. Apart from defraying past-due rent, the grant will also provide the first month’s rent and short-term financial support to assist with the initial costs faced by households moving from homeless shelters to permanent housing.

The Department of Health and Human Services will administer the funds, which will be disbursed by the five Community Action Program (CAP) agencies around the state. The program will operate much like the fuel assistance program, with the households making applications for grants and the agencies making payments directly to landlords or other creditors. CAP agencies are scheduled to begin taking applications on June 30 and the program will close on Dec. 30. The governor said that $20 million will be distributed in the first round and $15 million reserved against subsequent need for housing support.

Newton Kershaw, principal of the Elm Grove Companies who has twice recommended a rent stabilization program to GOFERR, said that while sufficient funding was difficult to calculate, $50 million “seems a little bit light.”

After polling a dozen landlords he estimated that with some 189,000 units and an average rent of $1,251, if rent collections dropped by 15 percent, between $70 million and $105 million would be required.

Elliott Berry of New Hampshire Legal Assistance, who has wrestled with housing issues for more than four decades, said “we need a lot of money,” adding that “$50 million is the very least and $70 million is an awfully good place to start.”

At the same time the governor said that $15 million of federal funds would be applied to restructuring and improving about three-quarters of the 46 homeless shelters in the state.

Elissa Margolin of Housing Action NH, who has warned of “a surge in evictions and homelessness once the moratoria and subsidies expire,” welcomed the announcement. She has explained that many shelters are ill-suited to provide safe quarters for the homeless in the midst of the coronavirus pandemic. Along with providing space for minimal social distancing they also require improved sanitary and kitchen facilities to contain the spread of the virus. Margolin has projected the cost of the work at $25 million, but said she was “really placed the governor has recognized the need.”

Shortly before the governor’s announcement, the Senate Election Law and Municipal Affairs Committee held a hearing on legislation introduced by Sen. Jon Morgan, D-Brentwood, that would provide $50 million in CARES Act funding for both renters to pay back rent and avoid eviction and homeowners to keep mortgages current and avoid foreclosure. The bill would appropriate another $5 million to the affordable housing fund administered by the NHFFA.

However, the future of the legislative initiative is clouded by the legal tussle between the governor and Legislature over the authority to disburse the federal relief funds.

The governor has insisted that his statutory emergency powers authorize him to disburse federal relief funds without the approval of either the Legislature or its Fiscal Committee. In April, the Democratic legislative leadership challenged the governor in court. After first dismissing the suit, Judge David Anderson of the Hillsborough County Superior Court last week reversed his decision and allowed the case to proceed.