From the Ground Up: SNHU Millyard Parking Garage 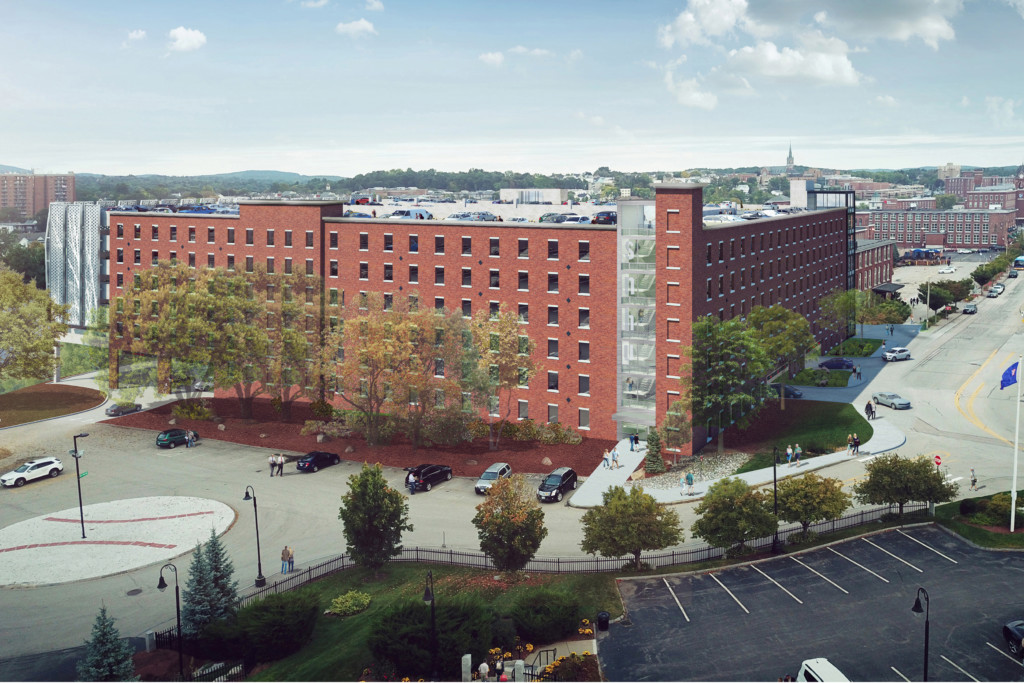 While it may seem unusual to compare a construction project to a dance, progress on the newly completed Southern New Hampshire University Milllyard Parking Garage was a delicate balance necessitating carefully calculated timing throughout the process.

“It was a very compact site,” says Bob Duval, president of TFMoran — which provided survey, civil engineering, structural engineering, site permitting and landscape architectural services. “There was little to no adjacent land available for staging and temporary construction operations. The site had to be broken up into a chess board of construction phasing.”

Due to strict space limitations on-site, the garage containing approximately 1,700 parking spaces, abutting South Commercial Street, the Merrimack River and the Langer Place Mill in the south end of the Millyard, was approached with a careful eye on the next move, every step of the way. Harvey Construction served as construction manager on the project.

“They’d work on a few squares at a time, bringing the site to the new subgrade for the ground level of the parking garage,” Duval says. “They’d stockpile materials on-site while working on excavation in one area, driving piles in another area while pouring concrete foundations in another area — all simultaneously. It was a ballet. It was something to see.”

Permitting began in late 2017, site plan approval came in early 2018 and construction began in earnest in April of 2018. Manchester-based GeoInsight Inc., responsible for the intensive initial environmental exploration on the project, provided thorough site preparation, allowing construction to remain on schedule despite occasional unexpected conditions. With its long and well-documented history, the Millyard began to give up pieces of its history as ground was broken and sections of the city’s industrial past were revealed.

“You have hundreds of years of previous occupancy there,” Duval says. “It was almost like an archeological site. There were old mills with newer mills built on top, and then newer mills built on top of those. Those buildings were torn down and rubble was left in place, so all of that had to be worked around. This was the third or fourth generation of building on this particular site.”

Workers uncovered remnants during construction, including an old penstock — a large flume-like device used to provide water power for a mill on that site generations ago.

“The contractor had to remove an eight-foot diameter pipe,” Duval says. “And to their credit, the people at Harvey Construction were able to deal with that unexpected condition without losing any time.”

Because the parking garage is a precast concrete structure, pre-fabricated concrete panels were shipped to the site and dropped into place by cranes. It was at this point the carefully orchestrated plans became a vital part of the process.

“It was an enormous challenge because you have these 60-foot long pieces, and no place to store them,” Duval says. “They had to arrive right on time and not block any access for the other contractors. Meanwhile, they’re still driving piles and they’re still excavating while they’re hanging concrete in the parts of the garage closer to the river.”

One of the more unique aspects of the project is that while it is a six-level parking garage, it doesn’t look like a traditional parking garage. The project’s architects, Built Form of Chicago, took specific details from neighboring historic buildings to create a façade that fits perfectly with its surroundings. The brick on the south and east facing sides work in concert with the rest of the south end of the Millyard, while the west facing side along the river features a more contemporary feel, using perforated metal screening that harmonizes with the more natural river surroundings.

“Quite a bit of thought went into it,” Duval says of the exterior. “The details, especially on the brick work, were taken directly from existing mill buildings.”

Window-supporting lintels, tie back rods and light fixtures were all inspired by nearby structures.

“Built Form did a great job by creating something complementary to its surroundings,” Duval says. “It looks like it belongs.”

Prior to the new parking garage, the site was a 150 spot surface lot, which fell far short of the university’s needs.

“It was in pretty good shape,” Duval says. “It was rebuilt around the time Fisher Cats Stadium was built — sometime around 2005 — but the 150 spaces were not enough to support SNHU in that location.”

Before the new parking garage was opened to SNHU, nearly 1,000 employees parked in satellite lots throughout the Millyard and took a shuttle bus system to get to their destinations.

“Those people were going to the Millyard and taking up all the available parking spaces — here, there and everywhere,” Duval says. “Now all those spaces are available to adjacent buildings. And there’s a big advantage for SNHU because they no longer have to run that extensive shuttle bus service.”

While the university will benefit immediately, that section of the city will likely be among the long-term benefactors of the project.

“It’s going to help ensure that the whole Millyard, from the Amoskeag Bridge to the Granite Street Bridge, will remain active well into the future,” Duval says. “This is a great asset and an anchor that will ensure the vitality of the entire Millyard.”