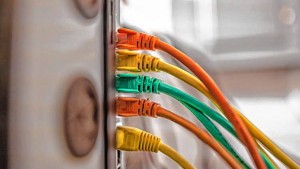 Despite having to handle dramatic increases for service, cable providers have committed to supporting online learning and affordable internet access through the end of June.

“Since this all began just six weeks ago, our technology teams have worked tirelessly and our network has performed well both locally and nationally,” said Marc Goodman, Comcast spokesperson for the Greater Boston area.

Both companies say their systems have been able to handle the increased usage.

Comcast reports that nationally gaming downloads are up 35% generally, and 80% during new releases. And with a 35% increase in streaming and web video consumption, there’s been a 250% increase in the voice search for “free” content, with voice remote queries topping 50 million some days.

On March 13, Comcast released a COVID-19 response plan, stating it would not disconnect a customer’s Xfinity internet, mobile, or voice service, and would waive late fees if the customer reaches out for help. The company recently extended the provisions through the end of June.

New customers of its Internet Essentials program for low-income households, will receive two free months if they sign on by June 30. After that the regular rate of $9.95/month applies. The program began nearly a decade ago and in 2018 was expanded to reach out to low income veterans, including more than 30,000 in New Hampshire.

“We’ve continually expanded eligibility,” says Goodman. “It is open to individuals who may live in HUD-assisted housing, or receive a number of federal benefits like Medicaid, SNAP, SSI, or have a child in the national school lunch program.”

He said the fastest way to apply is by using a mobile device, where supporting documentation of acceptance in a qualifying public assistance program can be uploaded, then the customer is shipped everything they need to get connected.

While there will still be some who won’t qualify because of past defaults, Goodman said, if someone is new to the program exceptions can be made. “Due to the coronavirus emergency, those households with debt less than a year old may be eligible, provided they apply and are approved by June 30,” he said.

Consolidated Communications participates in the federal Lifeline program providing a discount on phone and internet services to qualifying low-income families.

“During the past month we’ve been working with thousands of families throughout our service area by offering two months of free home internet service and no installation fees for families without internet access,” Koester said. “As a broadband provider, we know it is vital to have a secure and stable connection to give all students access to the resources they need.”

Consolidated also plans to continue services through the end of the school year.

Comcast has also opened its Xfinity Wi-Fi hotspots in business and outdoor locations across the country to anyone – including non-subscribers. The company is also offering free educational content, fitness programs, increased access to news and information and has started offering movies that were scheduled for theatrical release.