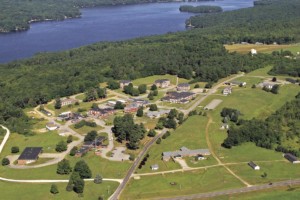 Four proposals to redevelop the former Laconia State School complex have made the cut and are finalists in a continuing process of selecting a buyer for the 225-acre property.

The four were selected among an unspecified number of proposals which were submitted by the Aug. 19 deadline, Executive Councilor Joe Kenney said. The offers were submitted to CBRE, the commercial real estate broker which has been marketing the property on behalf of the state Department of Administrative Services, the agency which has overseen the property. The property has gone largely unused since the State School was shut down in 1991 and the state prison closed in 2009.

Kenney said that he wants the process moving forward to be as open and transparent as possible, understanding that there will need, at times, to be a level of confidentiality when selecting which of the four competing proposals to recommend as the ultimate buyer.

Meanwhile a committee is being formed to work with officials in the Department of Administrative Services to review each of the proposals. Laconia Planning Director Dean Trefethen will be the city’s representative on the ad-hoc panel, according to City Manager Scott Myers.

City officials, including Mayor Andrew Hosmer, have long advocated that the property be transformed into a multi-use development, with commercial and retail uses, with housing that people who work at jobs in the city can afford included in the mix.

“When [Administrative Services] is able to share information I will be happy to be part of the discussion,” Hosmer said.

Kenney said that he expects the review committee’s process to move forward with the sale of the property will be outlined to the Executive Council at its meeting scheduled for Wednesday, Sept. 7.

Kenney said he was pleased that the process of selling the property now appears to be in its final phase.

Kenney noted the prospect of finally putting the State School property back on the city’s tax rolls is coming at a time when there is already considerable economic development in the city.

“This is the big one,” he said, “with lots of potential.”

According to the prospectus outlined by CBRE, the four submissions for review should contain each company’s development vision for the property along with a development timeline and a detailed explanation of the firm’s development experience and financial capabilities.

The companies were also told to provide evidence of their financial capabilities to fulfill the obligations of the multiyear development project and include a feasibility study of the envisioned project to determine its financial viability.

Meanwhile, the panel formed to study the development potential of the Laconia State School complex has essentially wrapped up its work. The panel authorized a final draft of a report about the historic value of buildings on the property on Tuesday.

“We don’t disband, but we go into hibernation,” George Bald, chair of the Lakeshore Redevelopment Planning Commission, said toward the end of the commission’s meeting.

The seven-member, volunteer panel was formed four years ago under the provisions of a bill passed by the New Hampshire Legislature in 2017.

Since then the commission has been working to prepare the property for marketing to one or more private developers. The commission’s work has included preparing a master plan, doing environmental assessments to determine whether hazardous materials are present, and a survey of wetlands on the site.

Bald said the research and analysis enhances the ability to redevelop the 225-acre property, because they provide information which will give developers a much clearer picture of the benefits as well as the drawbacks of the property.

“The developer won’t need to start from ground zero” in implementing their plan, Bald explained.

The commission’s responsibilities initially included identifying appropriate private firms to take on the project of developing the site. The property starting in 1903 was the location of the state institution for people with developmental disabilities, and then for about 20 years afterward was used as a state prison.

But last year the commission was sidelined from the process of finding potential buyers, with that responsibility being shifted to the state Department of Administrative Services — the state’s landlord — which then, with the approval of the Executive Council, hired a major real estate brokerage firm to market the property. In June the broker put out a request for proposals from firms that were seriously interested in redeveloping the property. The deadline for submitting those proposals was Aug. 19, and the proposals from four firms have now been selected for the final round of consideration.

Bald said that he would contact Administrative Services Commissioner Charlie Arlinghaus to discuss with him how the commission can still play a role in the process.

Much of the meeting was taken up with a review of a study draft which identifies the historic significance of the buildings of the property and to identify those which should be strong candidates for preservation.

Of the 35 buildings in the complex, 13 are seen as strong possibilities for preservation or rehabilitation as part of the site’s redevelopment.

But Laconia Planning Director Dean Trefethen told the commissioners there are serious questions about the structural soundness of some of the buildings. Many have holes in the roof which have existed for years and so the floors and other parts of the interiors have deteriorated due to the exposure to the elements, he said.

Commission Vice Chair Robert Cheney noted the condition of the buildings prevented those working on the historic assessment report to go inside to examine their condition first-hand, or to be inspected by a structural engineer.

Some details of the draft report were explained to commissioners by Quinn Stuart, director of cultural resources for VHB, a planning and consulting group, which acted as a subcontractor for NBBJ, an architecture, planning and design firm which prepared the master plan for the property’s redevelopment.