For many small farmers there’s a silver lining in Covid-19 cloud, but larger suppliers face a dire future 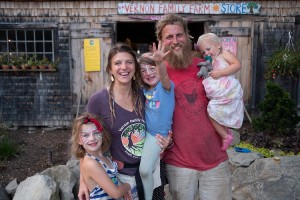 Nicole and Jeremiah Vernon and their daughters Magnolia, Indigo and Pingree of Vernon Family Farms in Newfields.

Across New Hampshire, the demand for local food is up, even as restaurants have closed or have tried to get by with takeout.

The state’s small farmers are finding an unexpected benefit in the Covid-19 pandemic – there is an increased demand for their locally grown meats, vegetables, dairy, and other products.

“It took a pandemic for people to determine that local food is essential,” said Jeremiah Vernon, who operates Vernon Family Farm with his wife Nicole and their three young daughters. “People have been asking how we are doing, and I feel bad saying it, but for our personal lives, our family and our employees, it’s never been better.”

Vernon Family Farm is on 33 conserved acres in Newfields, where they sell their pasture-raised chicken and eggs, plus grass-fed and pastured meats, prepared foods, vegetables, fruit, sauces, dairy and other items from local vendors, small businesses and farms.

“The farm store is busier than it’s ever been. Farmers are coming daily or every other day with product to sell,” said Nicole, an Exeter High School Spanish teacher who also handles the marketing and social media accounts for the farm.

Customers, whether they are new or returning, she said, feel a sense of safety coming into their farm store, which also features online ordering and car-side pickup.

“Almost every farm in New Hampshire has had to change how they sell their product, for some this may be a small shift, and for others, it has meant exploring an entirely new business model,” said Olivia Saunders, field specialist, food and agriculture for the UNH Cooperative Extension in Conway.

The value of New Hampshire’s agricultural industry is approximately $850 million,, and exports of food and agricultural products total over $22 million annually, according to the NH Department of Agriculture, Markets & Food.

And for the Vernons and others, business is thriving.

This boon comes during a time of year when farmers normally run lean and are racking up expenses getting ready for the growing season. The Vernons said now they can pay their bills, including more for employees, make needed improvements, and not depend on credit.

As successful as the online store has been, the Vernons do not want it to replace the experience of coming to their farm, which is known for its popular food and live music events throughout the year.

“Part of shopping at Vernon Family Farm is the experience of coming here and then running into the pork farmer. You can take a walk and see the chickens,” Nicole Vernon said.

On the water, some fishermen are also seeing a boom in retail sales. 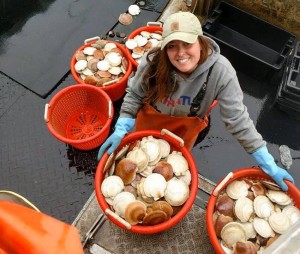 Kayla Cox, manager of New England Fishmongers, said the company’s business model for the past couple of years has been to sell directly to consumers – no wholesale.

“What has changed drastically is that home delivery has completely blown up. It’s almost out of control,” Cox said. “We were doing 15 to 20 deliveries a week, and this past week we did 170. We’re getting almost more messages that we can respond to. I think people are trying to stock up and buy in bulk.”

Cox said there is a big demand for local food.

“It lasts longer because its fresher, and it’s safer because fewer hands touch it,” she said.

The company, which is owned by Tim Rider, who is also captain of their two boats, is in the process of moving from Saco, Maine, into new office space in Dover.

“It’s so much change for us,” Cox said. “We have pre-orders before we even go out to catch the product. We may go out for haddock but only catch cod, so then we have to contact the customers and redo the invoices. There’s a lot of moving pieces. We’re just trying to adjust to it.”

Farmers’ markets, which many small producers rely upon for income, have been deemed essential services by the state under Gov. Chris Sununu’s emergency order. However, many winter markets across the state were cut short because of stay-at-home orders prohibiting large groups.

The bulk of the markets in New Hampshire operate in summer, often with starting dates in June.

Dianna Fallon and Bonnie Wright of the Salem Farmers’ Market say their market is one of the few that has remained open.

“It certainly has turned us upside down,” said Fallon, the market’s treasurer. “We had to respond quickly – within a week – to find a different space because we were in the (Fisk) school cafeteria. So when school closed, we had to close or move.”

The market has since been able to set up at its summer location at Salem Marketplace Plaza.

“Some farmers have struggled because a lot of (winter) markets have closed. We thought about it. When I told one vendor, he almost broke into tears, which is why we re-evaluated,” said Wright. “This is the most expensive time of year for farmers.”

Even though the Salem market was able to remain open, not all of the vendors are participating, especially those that typically provide free samples.

“Farmers and artisans are small businesses,” said Wright. “We help them survive. They produce products in quality and variety that you can’t get at your regular Market Basket.”

Wright said in many ways the farmers’ market is a business incubator. Many small producers got their start at the Salem market, which is a member of the local chamber of commerce.

Ross Williams, owner of Victory Aquaponics LLC in Londonderry, is one of those small businesses that rely on farmer’s markets and community-supported agriculture (CSAs) to sell his vegetables, greens and eggs.

Williams also relies on volunteers from the Worldwide Opportunities on Organic Farms, known as WWOFERS. Due to the pandemic, Williams has had to cut back on their help.

“They cannot go into the greenhouse. So I have no labor at the moment,” he said. “I am working seven days a week.”

“It’s how I get my product out there,” Catino said, who launched her business last fall. “I’ve done the market in Salem all winter long. It’s so important for people to even recognize that I am out there.”

Catino makes and sells traditional, gluten-free and vegan mac and cheese, and did the bulk of her business providing samples and selling hot cups and bowls of her products. Now the Salem market’s hours are reduced, and she can only sell frozen products.

To make up for the losses, Catino is on Facebook and has launched an online store. “I did want to be online, but I had to step it up and do it quicker,” she said. “I didn’t want to spend the money right now, but I had to. I hope it keeps me going.”

Wright noted that farmers’ markets aren’t just important to farmers and vendors, but for those who use SNAP benefits to purchase food. Her market subsidizes those benefits thanks to a generous donor. SNAP benefits cannot be used for online purchases.

Like other small farmers with retail operations, Joyce Brady has been busy. She and her husband Chris operate a livestock and poultry farm and a store, the Meat House, in Columbia near the Vermont border. 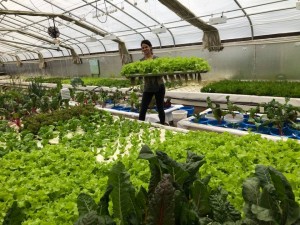 A greenhouse at Victory Aquaponics in Londonderry.

just kept going. We’re coming into the spring, and I have my bills paid up. It’s exciting.”

However, Brady, who is also the Coos County president of the NH Farm Bureau Federation, is particularly concerned about larger farms, especially beef and dairy farms that sell on the wholesale market.

“Their whole market disappeared overnight,” she said, adding that maple syrup producers and others have also been hard hit.

Portsmouth lobstermen Gary Glidden and his son-in-law Jake Eaton, who own and operate F/V Last Penny, saw their wholesale business – which relies on exports to Asia – dry up due to Covid-19.

In late March, they turned to Facebook and asked if anyone was interested in buying lobsters, and within days had thousands of requests. Their story even caught the attention of U.S. News & World Report, which featured them in a recent article.

Brady was careful to note there is no shortage of food, but disruptions in the markets and supply chain that are causing problems around the country.

One of those affected farmers is Scott Mason, who operates Northwinds dairy farm in North Stratford. He, like most dairy farmers in the state, sells his milk to a cooperative. Mason is a member of the Dairy Farmers of America, and the bulk of his product becomes Cabot cheese.

Milk pricing, he said, is extremely complicated. New Hampshire is part of the Northeast region, along with New York City and Boston, and dairy farmers are paid the value of milk in the region. Cows give a lot of milk in the spring, so it is a time of year when prices typically go down, and that had already started to happen when Covid-19 hit China.

This comes after a five-year slump in dairy prices, during which time many dairy farms in New Hampshire have closed.

Without that export market, Mason said the country has an estimated 7% to 15% excess of milk. In some parts of the country, including New Hampshire, large dairy farmers are dumping their surplus milk.

“Beef and dairy have been the worst hit, and pork is probably going to join, then the grain farmers,” Mason said.

Since so many people are staying home and not driving as much, the demand for ethanol is down. Farmers like Mason rely on distiller grain, a byproduct of ethanol, to feed his cows. He cannot find it, so now he’s buying soybeans. He also used to buy spent grains from the Budweiser plant in Merrimack, but since its production is down he has been bumped off the list.

“We hit our price peak in December. (Industry experts) are predicting we hit bottom in May-June, up to a 40% drop in price,” he said.

Exports are down, as is the demand for commercial products, like industrial-size wheels of cheese that weigh hundreds of pounds. Kids are home, restaurants are closed or downsized, and that means a greater demand for retail products, like gallon jugs of milk, but making those adjustments isn’t easy or quick.

The Cooperative Extension’s Saunders said the biggest impact is the unknown.

“Nobody has a crystal ball to predict what farms, if any, might fail, as much as we might wish for one now,” she said. “Running a farm business is always stressful, and the challenge posed to farmers by Covid-19 is not the first crisis farmers have successfully faced.”

Adding to concerns is that farming is an essential service in New Hampshire, but farmers may not qualify for U.S. Small Business Administration stimulus programs, except for the Paycheck Protection Program. For now, farmers have to wait for details of the USDA’s relief package, said Mason.