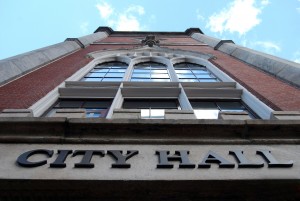 The New Hampshire House will be taking up a handful of bills this week aimed at asserting the power of the state while shrinking the authority of its municipalities.

Much of the legislation has been introduced and supported by Republican lawmakers, many of them endorsed by and associated with the NH Liberty Alliance, a coalition formed in 2003. And for the most part it has met stiff opposition from the New Hampshire Municipal Association and local government officials.

One, House bill 439, which would limit the authority of city councils, was called “one of the most serious attacks on local control this year” by the New Hampshire Municipal Association

The authority of city councils to enact and “alter, modify, amend and repeal” bylaws to prohibit some things and regulate others has been defined by RSA 47:17, a statute adopted in 1846 and frequently amended since, most recently to include drug-free zones.

For the most part, the statute reads like a calendar of changes occurring over the past 175 years. It prohibits “the rolling of hoops, playing at ball or flying of kites, or any other amusement or practice having a tendency to annoy persons passing in the streets and sidewalks, or to frighten teams of horses within the same.” And it addresses traffic lights, stop signs and parking zones.

And, in anticipation of unforeseen issues arising, the statute includes a “catchall” provision, granting cities authority to “make any other bylaws and regulations which may seem for the well-being of the city; but no bylaw or ordinance shall be repugnant to the constitution or laws of the state.”

HB 439 would strike the “catchall” provision from the statute.

The sponsor, Rep. Melissa Blasek, a freshman Republican from Merrimack endorsed by the NH Liberty Alliance, told the House Municipal and County Government Committee that authorizing cities to enact bylaws “for the well-being of the city” was “too broad.”

Blasek referred to a Laconia ordinance forbidding women from exposing their breasts, which effectively prohibited public breast-feeding and questioned the authority of Nashua to enact a curfew in response to Covid-19. She said the law would be “more constitutionally appropriate” without the provision.

Rep. Cody Belanger of Epping, another freshman Republican endorsed by the NH Liberty Alliance, also spoke in support of the bill, referring to towns that adopted measures like mask mandates beyond the governor’s emergency orders. He also highlighted the ordinance prohibiting “picketing” at private homes enacted by the town of Newfields, where protesters gathered outside the governor’s home soon after he imposed a statewide mask mandate.

Lebanon Mayor Timothy McNamara explained that while the statute enumerates many subjects suited for bylaws “it is not exhaustive” and consequently the “catchall” provision, with the constitutional limitation, is necessary. Otherwise, he said, the Legislature would be the only recourse for municipalities.

“There would be a flood of legislation to address emergent local issues,” he said.

The bill appears to apply only to cities. However, Cordell Johnston representing the NHMA, noted that supporting testimony referred to actions taken by towns as well and described the bill as a “first step in removing local authority from all municipalities.”

The Republican majority won the day as the committee endorsed the bill by the narrowest of margins, 10-9.

A decade ago, the Legislature stripped municipalities, counties, school districts and other political subdivisions of all authority to regulate firearms.

The statute, RSA 159:26, reads simply, “no ordinance or regulation of a political subdivision may regulate the sale, purchase, ownership, use, possession, transportation, licensing, permitting, taxation, or other matter pertaining to firearms, firearms components, ammunition, or firearms supplies in the state.”

Citizens are not prohibited from carrying firearms into municipal buildings. Despite a federal law permitting “gun-free school zones,” the NH Legislature has spurned similar legislation.

Although breaching the law carries no penalty, save for rare transgressions by local officials unaware of the law, compliance has been widespread and disputes easily resolved.

Nevertheless, Rep. Norm Silber, a Republican from Gilford endorsed by the NH Liberty Alliance, the sponsor of House Bill 307 – “The New Hampshire Second Amendment State Preemption Act” — seeks to add teeth to the law by punishing those who violate it. The bill entitles any citizen of a jurisdiction where a bylaw or ordinance violates the law to bring a civil suit in Superior Court to rescind the offending regulation.

If the court deems the violation inadvertent or negligent, it would carry a fine of $500 for the first offense, $1,000 for the second and $2,000 for the third would be levied against the jurisdiction, which would also be liable for attorney’s fees and court costs. Knowing and purposeful violations would carry a $5,000 fine. Moreover, a knowing and purposeful violation by a public official would be cause for termination of employment of a public employee and removal from office if an elected official.

It does not end there. An aggrieved citizen, whose complaint was not resolved within 90 days, could file suit and, if successful, be awarded $10,000 in damages along with fees and costs.

Along with seeking to deter and punish violations of the existing statute, HB 307 forbids local jurisdictions from regulating the sale, use or possession of firearms on any property owned or leased, whole or in part, by the state or its political subdivisions, including municipalities and school districts.

However, state law authorizes boards of selectmen and city councils “to manage all real property owned by the town and to regulate its use,” including the use of firearms. HB 307 would preempt that authority, turning public parks, playing fields and town forests into shooting ranges and hunting grounds.

The bill carried the House Criminal Justice and Public Safety Committee on a party-line vote of 11-9.

Although legislation to introduce a statewide property tax cap is not uncommon, it has seldom attracted much support or gathered much momentum.

This year, lawmakers are weighing an initiative to amend the New Hampshire Constitution through CACR 9, which would forbid cities and towns from raising property taxes by more than 2% and by more than 1% percent on property owners with disabilities and aged 67 and older. The proposal provides for overriding the cap by “a vote conducted by ballot,” without, however, specifying how or when the vote would be held.

CACR 9 Republican sponsors — Reps Terry Roy of Deerfield, Judy Aron of Acworth, Barbara Comtois of Alton and John Potucek of Derry — were all endorsed by the NH Liberty Alliance.

CACR 9 has been endorsed by the Republican majority of the House Municipal and County Government Committee, 10-9. To succeed, the amendment will require 60% majorities in the House and Senate to be placed on the ballot at the next general election, then the approval of two-thirds of voters.

In other words, CACR 9 would create a disincentive to economic development by depriving municipalities of the fiscal capacity arising from increased assessed valuation while saddling them with the rising costs of maintaining public infrastructure and facilities and placing them in ever more straitened fiscal circumstances.

State law authorizes cities and towns to enact tax caps. And a half-dozen cities — Dover, Franklin, Laconia, Manchester, Rochester and Somersworth — have done so, tailoring the ordinances to their particular circumstances. All would be rendered null and void by CACR 9.

As he did a year ago, Rep. Chris True, a Sandown Republican endorsed by the NH Liberty Alliance, introduced House Bill 183 prohibiting municipalities “licensing or regulating a lemonade stand operated by a person under the age of 18.”

True acknowledged he was not aware of any attempt to regulate lemonade stands in New Hampshire, but said he had read of police and health officials shutting down lemonade stands in other states and simply sought to insure it never happens here. “It’s not the New Hampshire way,” he said, reminding the committee “this is a Dillon’s Rule state,” where municipalities have only the authorities granted them by the state.

Several committee members described the bill as “a solution looking for a problem.”

Rep. Susan Treleaven, a Democrat from Dover, was blunt. “This was a waste of time last year and it’s a waste of time this year,” she said. “Stop wasting our time.” Others called the bill “frivolous.”

Hillsborough Democrat Rep. Marjorie Porter asked if a vendor at the annual Balloon Festival in town, where the lemonade stand is very popular, could escape licensure by hiring a teenager to operate the concession. Her fellow Democrat, Rep. Patricia Klee of Nashua, warned of stepping on to “a slippery slope with unintended consequences.”

The Republican chair of the committee, Rep. Tom Dolan of Londonderry, offered an amendment to replace “lemonade” with soft drinks, and the bill carried the committee on a party-line vote of 10-9.