Interest in, awareness of state, federal programs is limited 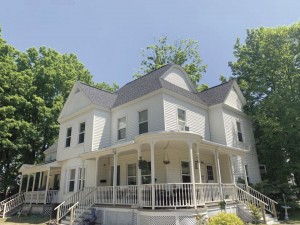 This Laconia property owned by Lakes Region Community Developers recently got a lead-safe certificate after some abatement work that removed lead paint from the exterior of the building and an exterior door to the basement, and some lead paint dust found in one of the window wells on the first floor. The project, which Carmen Lorentz, the agency’s executive director, called ‘small,’ cost $14,915 to complete.

According to the New Hampshire Housing Finance Authority, which has abated lead paint in 1,399 housing units statewide since 1998, many property owners don’t realize that financial assistance is available to remove or encapsulate lead in the home through federal grants, state loans or both.

Eligibility is determined by the income level of the people who live in the house or apartment, not by the income of the landlord offsite. Both federal and state options are geared to low- to middle-income earners. Income guidelines are slightly more forgiving for the state’s zero-interest loans.

For instance, a landlord or owner in Belknap County is eligible to borrow money from the state’s lead hazard abatement fund if the tenant or owner-occupant’s income is $57,680 or less for a single resident, or $82,400 or lower for a family of four.

Generally, the size of a grant varies according to the property’s size and condition, but $12,000 is considered a reasonable estimate, according to NHHFA. The state loans up to $100,000 for owner-occupants, and $11,000 per rental unit.

But interest or awareness of both options lags.

Relatively few people in the Lakes Region tap federal funds for lead abatement. Since mid-2017, approximately 70 New Hampshire property owners outside Manchester and Nashua (which administer their own federal lead abatement programs) have been helped by grants through NHHFA, which come from the U.S. Department of Housing and Urban Development, to remove or encapsulate lead, according to NHHFA.

In 2018, Senate Bill 247 was signed into law, creating a $3 million revolving loan fund that has provided over $600,000 in zero-interest loans to 31 New Hampshire property owners. The lead paint abatement loans are guaranteed by liens. Borrowers are required to repay them when their properties are transferred or sold. The fund – which is replenished as the loans are repaid – currently sits at about $2.4 million.
NHHFA administers both state loans and federal grants. For more information, visit nhhfa.org.