Raw, or unpasteurized, milk and milk products have been a controversial topic for quite some time. Most recently, in response to new FDA guidelines, the controversy has centered on raw-milk cheese. 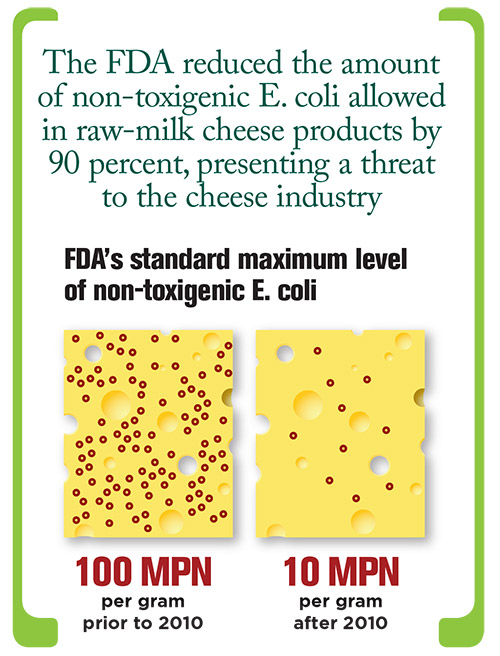 In 2010, the Food and Drug Administration published a compliance policy guide on dairy products. The document provides guidance on the acceptable amount of pathogens and other indicators of contamination, such as alkaline phosphate and non-toxigenic E. coli, in dairy products.

The document, which only recently has been used as an enforcement mechanism, sparked a response from industry groups, consumers, producers and members of Congress.

The guide made two significant changes. First, the FDA eliminated the two different criteria for pasteurized and one for raw-milk cheese. As a result, all cheese now has to meet the same non-toxigenic E. coli standard. Second, the FDA reduced the amount of non-toxigenic E. coli allowed in products by 90 percent.

The 2010 document required no more than one of five samples exceed a standard maximum bacteria level of 10 MPN (most probable number) per gram. Prior to 2010, the standard maximum level of non-toxigenic E. coli was 100 MPN per gram.

Industry stakeholders expressed their concerns with both of these changes. After hearing their concerns, and conducting a sampling program for raw-milk cheese, FDA modified the standard maximum level for non-toxigenic E. coli. Now, the FDA requires no more than two of five samples exceed the 10 MPN per gram standard for non-toxigenic E. coli. However, even this change presents a threat to the cheese industry.

The non-toxigenic E. coli standard threatens to limit the production of raw-milk cheese around the country, and overseas, by making it more difficult for producers to meet FDA standards. The FDA has defended the change as necessary to protect public health and insists the majority of cheeses will meet the new standard.

However, the FDA continues to receive criticism. Most recently a bicameral, bipartisan congressional coalition sent a letter to FDA Deputy Commissioner Michael Taylor. Among those who signed the letter were U.S. Sen. Jeanne Shaheen and U.S. Rep. Ann Kuster of New Hampshire. Three Vermont lawmakers and two Maine lawmakers also signed the letter.

The letter, sent on Dec. 3, 2015, challenges the legitimacy of the new non-toxigenic E. coli standard and asks the FDA to continue to listen to and work with producers. The delegation believes the new standard seriously threatens the artisan cheese industry and presents a risk to the rural economy in New England and across the country.

In addition, the letter asks the FDA to reconsider whether the standard is consistent with a risk to public health.

Clara Conklin, an associate at Primmer, Piper, Eggleston & Cramer, Littleton, can be reached at 603-444-4008 or cconklin@primmer.com