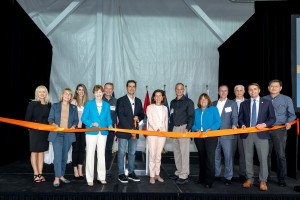 Just days after President Biden signed into law the CHIPS Act –legislation aimed at pumping billions of dollars into semiconductor investment and development in the U.S. – Arizona-based onsemi last week cut the ribbon on its newly expanded facility in Hudson.

The company – one of the nation’s largest makers of semiconductors, says the facility – the site of the former GTAT Advanced Technologies – will increase the firm’s production capacity by five times and almost quadruple the number of employees already in Hudson by the end of 2022.

The company also says the expansion gives it full control of its silicon carbide manufacturing supply chain, starting with the sourcing of silicon carbide powder and graphite raw material to the delivery of fully packaged devices.

Silicon carbide is a key component used in manufacturing electric vehicles as well as EV charging and energy infrastructure.

Among those at the ribbon-cutting were Secretary of Commerce Gina Raimondo as well as both of New Hampshire’s U.S. senators, Jeanne Shaheen and Maggie Hassan, as well as U.S. Reps. Chris Pappas and Annie Kuster. All four members of the state’s congressional delegation voted in support of the CHIPs Act.

In its second quarter earnings report, onsemi announced that it will generate roughly $4 billion in silicon carbide-related revenue over the next three years through long-term supply contracts with various customers. onsemi’s sales target for silicon carbide next year is over $1 billion. The global market is expected to grow from $2 billion in 2021 to $6.5 billion by 2026.

“In the (silicon carbide) market, where supply has been limited, onsemi can provide a differentiated competitive advantage with our end-to-end vertically integrated solutions on top of product efficiency,” said Simon Keeton, vice president of onsemi Power Solutions Group. “We are now able to source cutting-edge (silicon carbide) wafers for our customers’ products,” he adds.