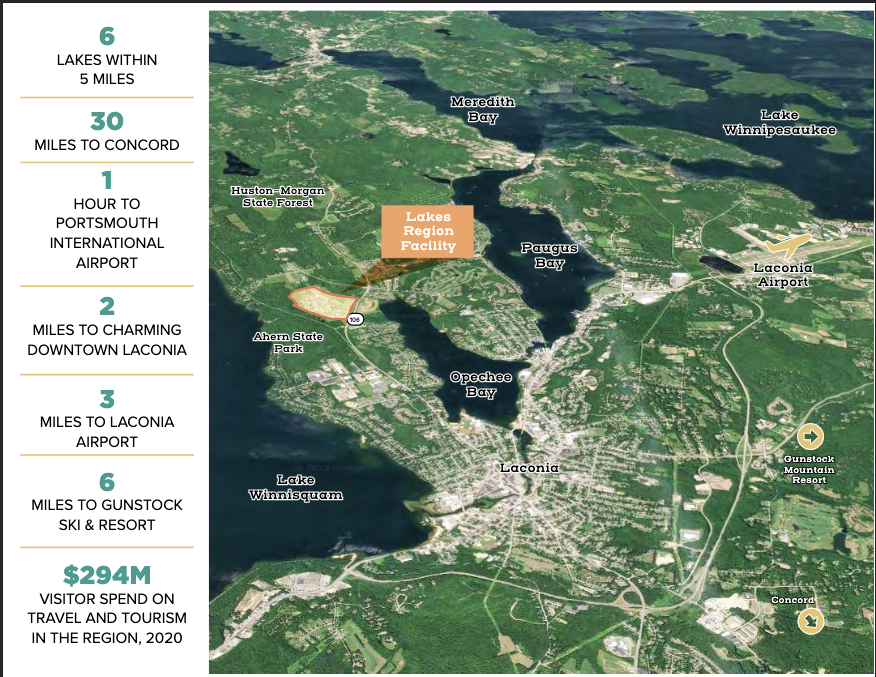 The offer is being made by Legacy at Laconia LLC, which is managed Robynne Alexander, managing member of the Infinite Equities Group, a Manchester firm that describes itself as “an adaptive reuse and value-add commercial property redeveloper specializing in acquiring under performing real estate and with a proven system for increasing its performance and property values.“

Legacy’s offer amounts to $99,078 per acre and is approximately eight times the appraised value calculated by the state in 2011. The state engaged real estate firm CBRE to market the property, which is beset with failed infrastructure, derelict buildings and requires environmental remediation. It was marketed with the caveat, “AS IS WITH ALL FAULTS.”

Under the Legacy at Laconia plan, development of the site would include 1,300 residential units, among them 340 single-family duplex or triplex homes, half of them priced as “entry-level” homes. There would be 108 condominium units, 500 apartments, 120 of them designated as “workforce housing,” and 350 townhouses. In addition, the plan includes 360 units of independent living units for seniors along with 230 assisted care units.

The contract with CBRE anticipated the property might fetch nothing at all, in which case the brokerage fee would be a flat $50,000, as opposed to 5 percent of the sale price. Under the terms of the proposed transaction, CBRE stands to earn $1,075,000 while the state reaps a net return of $20,425,000. The transaction is contingent on Legacy at Laconia successfully completing two rounds of due diligence.

The property has been vacant since the prison closed in 2009. In 2021, the Legislature vested the governor, with the approval of the Executive Council, with sole discretion to sell the property. CBRE began marketing the property in March 2022, and in June, after meetings and discussions with a handful of interested parties, issued a call for offers by Aug. 19.

Four proposals were received to purchase and redevelop the property, and after reviewing them CBRE urged all four parties to “strengthen their proposals and sweeten their offers” and submit their best and final bids by Sept. 30.

Administrative Services Commissioner Charlie Arlinghaus convened a technical review committee to screen and rank the proposals as well as assess the qualifications and experience of the developers.

The committee recommended Legacy at Laconia proposal to the governor, who directed the Department of Administrative Services to present the preferred redevelopment plan to a public meeting in Laconia. Without disclosing the identity of the developer, Arlinghaus, accompanied by Troudy Vaughan of CBRE, unveiled the plan in October.

Besides the housing, which is sorely needed in the Lakes Region, the plan also contemplates a convention facility with capacity for 1,000 people associated with a “destination center” of 250 rooms, along with urgent care and child care facilities complimented by a pharmacy. Half of the property would remain undeveloped, but open to a variety of recreational uses, and subject to current use taxation.