But company argues he was never an official employee 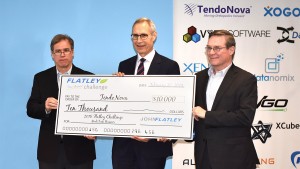 Roy Wallen, right, then with TendoNova, is shown after the firm won the 2019 Flatley Challenge in the Medtech category. Also shown are John Flatley, left, and Nashua Mayor Jim Donchess.

The former CEO of TendoNova Corp. – a finalist in the NH Tech Alliance’s 2018 Tech Out competition and a 2019 winner of the Flatley Challenge – has filed suit against the company, alleging he was never paid any wages, expenses or given the restricted stock options he is owed.

In a suit filed in U.S. District Court in Concord, Roy D. Wallen of Brookline claims he founded the company – headquartered in Georgia, but with an office in Keene – and worked as its CEO from December 2017 to May 2020.

But the company, though its attorney in Georgia, maintains that Wallen was a consultant and the consulting company got the stock options due.

During TechOut, Wallen presented the company’s Ocelot system, “a novel medical technology that addresses chronic tendon pain at lower costs in clinical and office-based settings” according to an article at the time in NH Business Review, one of the “international” publications Wallen cites as identifying him as the CEO.

In his suit, Wallen says that he worked more than a full work week, raised nearly $1 million in capital, obtained grants, acted as a primary contact for investors, served as company spokesperson, and represented the company on patent matters and license agreements.

But he adds that his responsibilities required no technical or specialized skills and that the opportunity for the company’s profit and loss did not depend on those skills.

He also says that his powers at CEO were limited: He could not delegate tasks, nor could he hire and fire employees. That was the jurisdiction of the board. The board also “dictated and monitored” other aspects of his job, including regulatory strategy, establishment of contractors, the payment of invoices and his own compensation.

There was no employment agreement, Wallen says in his suit, but TendoNova did require Wallen to agree to noncompete and non-solicitation provisions in the stock agreement, thereby making him an employee under federal and state law. The company “willfully and deliberately misclassified Wallen as an independent contractor,” he alleges.

On May 26, Lou Malice, chair of TendoNova’s board, sent Wallen an email and letter confirming his “immediate termination on that date from the role of CEO of TendoNova Corporation,” according to an exhibit attached to the lawsuit.

In addition to violation of fair labor laws, including the minimum wage laws, Wallen says in his suit that he is owned 68,333 of restricted stock options as well as expenses and attorney’s fees. He did not specify the amount of cash compensation.

In the termination letter, the company offered 30,000 shares and a $5,000 severance package, plus an agreement that Wallen participate in the “messaging regarding your termination.”

TendoNova has yet to reply to the suit in court, but on Wednesday, its attorney Barton Black issued the following statement:

“TendoNova maintains that Mr. Wallen was not an employee of TendoNova, but that he delivered his services to TendoNova as a consultant through his medtech consulting company, Directional Healthcare. TendoNova further affirms that it has provided Directional Healthcare with all of the shares to which it is entitled under its Restricted Stock Agreement. Mr. Wallen does not own and is not entitled to any shares of TendoNova.”