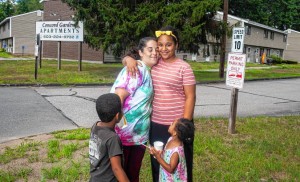 For a long time, Renee Johnson has been trying to get into the Concord Garden Apartments, where she would have enough room for her three children, Cortland, 13, Willis, 6, and Reneshia, 3, but her housing voucher have made it difficult. (Geoff Forester/Concord Monitor)

After Renee Johnson received a housing voucher, she thought it would make finding an apartment easier.

She waited three years for a complex packet that details a series of rules, income brackets, and rental prices. She quickly learned the rental market – with a vacancy rate below 1 percent – has so few options that finding an affordable apartment is nearly impossible.

“Now it’s even harder. You can’t find the cost of the apartment with the voucher,” she said.

On July 20, Johnson received her housing choice voucher, more commonly known as a Section 8. She is in a race against the clock to put it to use before it expires in mid-September.

Most landlords don’t want to deal with a prospective renter with a voucher. The few that do often charge too much, rendering the rental assistance useless because of cost limits. Searching for a place to live for her family has become a daily struggle for Johnson as she walks around Concord filling out as many applications as she can, hoping she can finally catch a break.

“It is just very, very hard,” she said. “It’s hard that I don’t have transportation.”

When Johnson first applied for her housing voucher, she was told the wait could be anywhere from five to eight years. Although her process was faster than expected, she now is tasked with finding an apartment without a computer or car.

Johnson searches for listings on her phone, looking at Craigslist postings in hopes of finding a two to three bedroom dwelling so her three kids could live with her. Most posts are out of her voucher’s price limit. She’s tried Zillow and Apartments.com too, with no luck.

Alternatively, she will go in person to apartment complexes to pick up rental applications. She takes the bus if the route allows. If not, she’ll walk. Sometimes, her kids are in tow. She got a major sunburn on one of her recent excursions, she said.

Voucher amounts are based on fair market rent prices. The U.S. Department of Housing and Urban Development calculates prices based on the 40th percentile of gross rent for an area. In Merrimack County, the rate is $1,237 for a two bedroom and $1,569 for a three bedroom with utilities included.

However, the median price for a two-bedroom apartment in the county is $1,318, according to New Hampshire Housing’s 2022 Rental Cost Report, which is above the voucher limits.

“With some of the sizes of the apartment they want to charge an arm and a leg for so many square feet,” she said.

Vouchers issued by Concord Housing require tenants to pay 40 percent of their adjusted monthly income towards rent. Tenants are unable to exceed this income limit, meaning they cannot pay landlords out of pocket to cover expenses beyond the price of the voucher.

Even if Johnson had $200 a month to cover the difference between $1,800 in rent and her $1,596 voucher, she would be unable to rent that property based on the housing authority’s rules.

She has 120 days to use the voucher before it expires. If she has no luck before then, she can ask Concord Housing for an extension in increments of 30 days.

Johnson knows she could find more affordable apartments outside of Concord. But that would require uprooting her children, and herself, to an unfamiliar area.

The same is true for Mark Boissy, as he struggles to find stable housing in his hometown. He grew up in Concord, living blocks away from the State House as a kid. Now, he sleeps in a tent behind Everett Arena.

“I was willing to go to a third world country, which I looked up online like Thailand, Vietnam, Laos, Philippines, where I can live on $200 a month,” he said. “I can actually get an apartment which I cannot do in Concord, New Hampshire or anywhere in the USA.”

In May, Concord Housing stopped taking applications for vouchers due to the lack of available housing in the area. The vacancy rate for an apartment in Merrimack County is 0.3 percent, according to NH Housing. Nationwide, the rental vacancy rate it is 5.8% .

Boissy will turn 65 in December. Since he was laid off from his job in 2016, he’s been in and out of housing. He’s worried about where he’ll sleep when the temperatures drop.

“With winter coming I can’t be in a tent pushing 65 years old,” he said.

Boissy’s situation also highlights the complexities of rental assistance programs. Just last year, he thought he had reached the top of a wait list for a studio apartment. But when he asked New Hampshire Housing Authority about his status, he said he was told he was not on any list

“How come a New Hampshire guy like me – I grew up right here in Concord right up the street from the State House – doesn’t even get addressed?” he said. “They don’t even put me up for one night.”

The Concord Coalition to End Homelessness helps clients apply for programs, but it does not issue housing vouchers. Although the coalition owns two properties with apartments on Green and Pleasant Street in Concord, the list of eligible applicants comes from the New Hampshire Housing Finance Authority, said Mark Fagan, chief operating officer for the coalition..

The only control the coalition has over housing placements, is when they fill out a tenant selection form that can help expedite placement for a client in one of their properties.

With various routes for rental assistance and housing options, applying for housing aid is a time-consuming and complex process, Fagan said.

For example, the application for an emergency housing voucher is 25 pages long, Fagan said.

These applications also require documentation that many people experiencing homelessness do not have. In between moves or without a secure place to store documents, having papers that show proof of a Social Security number, birth certificate or driver’s license can be difficult.

“The challenge for our clients is really the intense paperwork that goes into applying for something that may not lead to stable housing for many months if not years,” said Fagan.

The coalition helped Kevin Kincaid apply for a voucher. Even if it is approved, he is not sure how it will help.

“Even with a voucher, there’s no housing. Trying to find your own place, your own space is not an easy thing to accomplish in the city of Concord,” he said.

The challenge goes beyond finding an apartment. It also includes finding a landlord who is willing to accept housing vouchers. New Hampshire is the only state in New England where it is not illegal for landlords to discriminate against someone’s source of income. Although a bill was introduced in the last legislative period to change this, it did not pass.

Kincaid, who is “residentially challenged,” as he likes to say, has been in and out of housing for 30 years. Currently he is staying in a friend’s basement.

Prior to applications closing, Kincaid was told it could take up to a year to get the voucher. Most days, he comes to the coalition’s resource center to check his mail in case news of rental assistance awaits him.

“But then again, what use is a voucher if I don’t have anything to use it for,” he said.