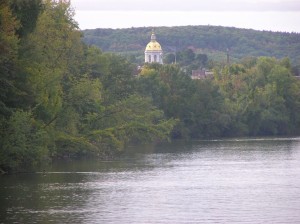 Two sites in Concord and one in Manchester were cited in the Conservation Law Fund suit.

Schnitzer Steel Industries violated the Clean Water Act by discharging heavy metals into the Merrimack River watershed, according to a lawsuit filed last week by the Conservation Law Foundation.

The complaint, filed in U.S. District Court in Concord, charged that the publicly traded, Oregon-based steel manufacturing and metal recycling company repeatedly violated the federal Clean Water Act over the last five years, with discharges that sometimes exceeded environmental guidelines by a factor of more than 100.

The New Hampshire filing named three discharge locations. Two are in Concord, one on Poplar Avenue, which discharges into the South End Marsh, a part of the Merrimack River watershed, and the other on Sandquist Street, where the discharges go directly into the river. A third facility is on Allard Drive in Manchester. discharges go into the city’s storm sewer system before entering the river.

The complaint cites how the company exceeded benchmark values for aluminum, copper, iron, lead, zinc and total suspended solids. While these benchmarks aren’t strict permit limits but rather guidelines, they are supposed to trigger corrective actions to minimize them.

For instance, a copper discharge at the Sandquist Street facility during the monitoring period ending Sept. 30, 2020, was found at 447 times benchmark levels. It can cause liver and kidney damage, increased risk of heart disease, nausea, vomiting, abdominal pain, diarrhea and even death, according to the suit. A discharge of copper at the Manchester facility was found to be 192 times higher than the benchmark during a monitoring period ending Dec. 31, 2020.

Zinc can also cause brain damage and developmental issues. The Manchester facility allegedly discharged it at 115 times the benchmark level in the period ending Dec. 31, 2020.

“When you have such large numbers, that’s when it starts to get dangerous,” said Heather Govern, vice president of the CLF’s Clean Air and Water Division and lead attorney on the suit.

CLF asked the court to find the company in violation, enjoin it from further violations, pay civil penalties and attorney’s fees. Schnitzer had yet to make a filing on March 1. Govern said she talked with Schnitzer’s attorney shortly after sending a letter of intent to sue back in December. The company seemed ready to settle, but Govern said, “It would take a lot of work, and they would need to spend a lot of money on compliance. There is a lot of stormwater infrastructure work that they would need to commit to.”

Schnitzer, based in Oregon, is traded on the Nasdaq exchange under the ticker symbol SCHN. The company has operating facilities in 25 states. It had revenue of $2.76 billion and net income of $170 million in the fiscal year ending Aug. 31, 2021. It expended $36 million relating to environmental projects in that fiscal year and expects to spend $30 million to $40 million in fiscal 2022, according to a financial filing with the U.S. Securities and Exchange Commission.

Calls to Schnitzer’s Concord facility, its national press spokesman and its attorney were not returned by NH Business Review deadline.