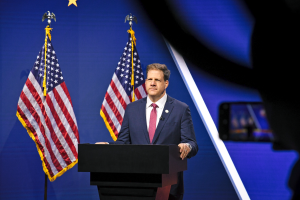 Gov. Chris Sununu places the blame on the U.S. Treasury Department for not communicating the reasons for its decision regarding rental relief funding.

A year-and-a-half-long rental relief program is likely coming to an end soon, state officials announced last week, after the U.S. Treasury left New Hampshire out of the latest round of funding.

Now, housing advocates are urging the state to develop and present a backup plan – before the federal funding runs out on Dec. 29. A September investigation by the Granite State News Collaborative found that 750 to 900 people receiving rental assistance are residing in hotels due to a lack of available apartments.

“I just hope that anyone can come together, identify where the resources are, and make sure we’re addressing the most urgent situation so we don’t see a spike in homelessness right before winter,” said Elissa Margolin, director of Housing Action NH, an affordable housing advocacy organization.

But so far, state leaders say they aren’t planning on a major replacement effort should the program end.

“The state is not necessarily going to be putting forward hundreds of millions of dollars in rental assistance as we continue forward,” said Gov. Chris Sununu at a gubernatorial debate Tuesday. “Our dollars need to go to new bricks and mortar, new buildings,” he added, referring to a separate program to boost rental housing construction.

New Hampshire’s relief initiative, known as the Emergency Rental Assistance Program, has been helping pay rent and utility bills for low-income New Hampshire residents since March 2021. But the program has relied on a steady stream of federal funds from two bills passed by Congress during the height of the pandemic.

On Oct 18, a published list by the Treasury revealed that New Hampshire was not among the 28 states that are continuing to secure funding for a pandemic-era housing assistance program. Due to the likely end in funding, the NH Housing Finance Authority has paused new applications for rental relief, the agency announced last week.

The development has prompted a flurry of finger-pointing. When first announcing the federal decision, Sununu blamed the Treasury Department itself, which he said was unfairly abandoning New Hampshire families without warning. Democrats, meanwhile, have turned the focus back on Sununu, contending that the lack of approval by the Treasury was prompted by the state’s slow rollout of housing funds in 2021.

A Treasury spokesperson did not directly answer a question from the Bulletin about the decision, but suggested that the state still had an opportunity to be awarded funds in the future.

“Treasury has communicated from the beginning of the process that additional Emergency Rental Assistance funding will be disbursed in multiple rounds,” the spokesperson said Monday. “That process is ongoing and Treasury continues to review requests, including from New Hampshire, before additional payments are made to grantees.”

Advocates for housing in the state say that state officials and lawmakers need to work quickly and find backup funding to help the families who are currently receiving the rental assistance.

“Our rental market is in a crisis point,” said NH Legal Assistance Housing Justice Project Director Elliott Berry in a statement. “… We urge all options to be fully explored to provide some targeted assistance to ensure an orderly wind-down.”

State officials say that they have already built in a process to help tenants leaving the program.

“NH Housing Finance Authority and the Community Assistance Programs have been working with individuals and families transitioning on/off the ERA program since its inception,” a spokesperson for the Governor’s Office for Emergency Relief and Recovery (GOFERR) – the entity responsible for spending federal Covid relief funds – said in a statement Tuesday.

“… In every case, our support agencies have worked to make this transition as smooth and well supported as possible,” the statement continued.

But most observers believe New Hampshire’s program is nearing its final days.

New Hampshire has so far distributed nearly $231 million in funds through the rental assistance program, according to a state dashboard.

Those funds have gone to eligible tenants to cover a number of services, from up to 15 months’ rent to utilities, home heating and internet service. The average payout has been $10,046 per household, according to the state.

The program has been funded in two tranches from two separate congressional Covid-19 aid bills in December 2020 and March 2021. But New Hampshire’s program did not have a smooth rollout. The state struggled to quickly distribute the first amount of funding, known as Emergency Rental Assistance 1, or ERA 1, as tenants and landlords became bogged down in extensive paperwork requirements and turnaround times suffered.

When Congress passed the second tranche in 2021, known as ERA 2, it eased some of those barriers and broadened who was eligible. New Hampshire officials quickly transitioned to those funds, relaunching the program in 2021 and working to get the money out more quickly.

In the process, the first pot of funding – with its more stringent requirements – was largely left behind. In March, the U.S. Treasury reclaimed nearly $19 million that the state had not spent from ERA 1, opting instead to distribute it to other states.

As it moved over to its faster program, New Hampshire continued to apply for and receive more funding for ERA 2. Last week was the first time the state was not granted its request. The state had asked for $67 million.

Sen. Jeanne Shaheen and other Democrats argue that the state’s eagerness to switch to ERA 2 and leave ERA 1 funds unspent led to the $18.7 million clawback in March and could be the reason New Hampshire wasn’t awarded additional funds this month.

“This is the central issue: The reason that the U.S. Treasury Department has declined to fulfill your request to reallocate ERA 1 funds at the last minute is in all likelihood due to your own failure to spend these funds effectively when you had the opportunity,” wrote Shaheen in an Oct. 21 letter to Sununu.

Treasury guidance issued in March says that states and other entities can receive additional reallocated housing funds “with priority afforded to grantees already on track to expend ERA funds promptly.”

Sununu, meanwhile, lays the blame on the Treasury for failing to work with the state on its request and not communicating the reasons for its decision.

“After waiting several months, we learned that without notice or explanation, additional (ERA) funds for New Hampshire have been rejected while 28 other states around the country have been given the resources for their program to continue,” the governor said in a statement last week.

“With skyrocketing inflation, cold weather, and the holiday season, this is the absolute worst time for the federal government to take this step.”

When it comes to a path forward to help those benefiting from the program, Margolin has some ideas. New Hampshire still has unspent money from the American Rescue Plan Act that could be dedicated to rental relief, she said. The state has a record surplus in its own coffers and a rainy day fund that could be utilized through emergency legislation.

And the federal government has a long-running program – the Housing Choice Voucher Program, also known as Section 8 – that could help many families if the state put resources into incentivizing landlords to accept those funds, Margolin added.

Margolin said the end of the relief program could prompt an overdue reckoning.

“I think it’s kind of an opportunity for us to implement some best practices and try to get families to a more stable housing situation,” she said. “… I don’t think anybody wanted a short, urgent window for action, but that’s what we find ourselves facing.”

On Monday, the chair of the Joint Legislative Fiscal Committee, Rep. Karen Umberger, R-Kearsarge, said she was not aware of any transition plans in the works from the state to account for a drop-off in funding. Any plan would have to be approved by the Fiscal Committee, which next meets on Nov. 18.

“I have no knowledge at all,” Umberger said Monday, speaking on the end of the rental relief. Asked whether Taylor Caswell, director of GOFERR Governor’s Office for Emergency Relief and Recovery, has proposed a backup plan, Umberger said: “He has not.”

GOFERR has also returned the focus to the Treasury. Asked whether the state should devote some of the state’s remaining American Rescue Plan Act money toward housing relief, a spokesperson for GOFERR suggested the state could still receive funding.

“The state is hopeful that the U.S. Treasury will reconsider its position and instead provide additional funds under the federal ERA program to continue providing rental assistance beyond the holiday season,” the spokesperson said Tuesday.

“This is pretty urgent when you have 700 families living in a hotel and, eventually, the resources to cover their hotel stay is going to disappear in the middle of a school year for kids,” she said. “It’s not good.”