PUC seeks a big increase in funds for conservation

Whelen Engineering will be spending $175,000 to switch its fluorescent lights to LED this year, saving the company $60,000 a year — 20 percent of its electric bill. But the Charlestown manufacturer, which employs 950 people, will get its money back in two years rather than three, thanks to a $50,000 grant from its utility.

Mike Turcotte started Turn Cycle Solutions in 2009 with $364 in his pocket. Today, the Nashua-based firm helps weatherize hundreds of home, thanks to utility funding.

The claim for these ratepayer-funded programs is that they will actually reduce electric rates not just for those who take advantage of them to cut their energy usage and reduce their utility bills but also for those who do not. And in the long run, those savings will more than make up for the extra amount that ratepayers are investing now.

“It’s counterintuitive that paying more will result in a savings overall,” said Ellen Hawes, a senior analyst of Acadia Center, an environmental advocacy group in Boston. “But that’s what the data shows.”

“When you reduce grid usage, you don’t have many peak power days,” added Laura Richardson, executive director of the Jordan Institute in Concord. “There was one afternoon when the cost went up to $1,740 a kilowatt-hour. It was outrageous. If you shave the peak, everybody saves.”

“If the energy-efficiency savings reduce the load enough, then we are reducing wear and tear on the grid, the need to build power plants to handle the peak demand on the really hot days and cold days,” said Kate Peters, a senior analyst of energy-efficiency for Eversource.

But while some businesses have signed onto the idea, others are skeptical.

“Our biggest concern is what it is going to cost our members,” said Stefanie Lamb, vice president of environment public policy at the Business and Industry Association of New Hampshire. “We’re concerned about anything that has the potential to raise our bills.”

The debate centers on the two rate charges that pay for the so-called CORE energy-efficiency programs, programs offered by utilities — the system benefits charge (SBC) and the Regional Greenhouse Gas Initiative.

Ratepayers have always paid the SBC, about a third of a penny per kilowatt-hour, or about $2.15 a month for the average residential user. Some of the money is used to help low-income ratepayers pay their bills. The rest (0.18 of a penny) is dedicated to the utilities’ various energy-saving programs, outlined at NHSaves.com.

The SBC hasn’t been increased since 2001, but that is about to change after the Public Utilities Commission adopted an energy-efficiency resource standard (EERS) early last month. The standard is set to take effect in 2018.

Until that decision, New Hampshire was the only New England state without an EERS. More than half of the states in the United States have one, and all but three have a better energy-efficiency rate than New Hampshire, though the state does have the third best among those that do not have an EERS.

Currently, New Hampshire saves about 0.6 percent of our electricity though energy efficiency. The PUC standard aims to increase that to 3.1 percent between 2018 and 2020.

The state saves about 0.66 percent in natural gas use through energy-efficiency programs, and it would increase that to 2.25 percent over the same time period.

Getting to the higher efficiency level is not rocket science, and the state could have accomplished it sooner, if the programs didn’t keep running out of money. Even before fall, the residential weatherization rebate program is nearly exhausted. (It usually doesn’t even last this long. An unusually mild winter, coupled with lower energy prices, calmed demand.)

It’s not just the residential programs. Eversource’s small commercial program was used up by the end of the first quarter. Funds in the large commercial and municipal programs are now depleted as well.

With such demand, it’s easy to see how more money would translate into more homes and business using less energy. And that more money comes from the system benefits charge. 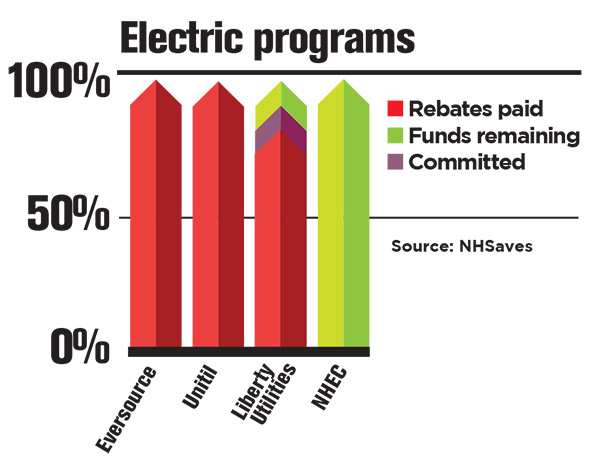 The SBC currently pays for nearly $20 million of the $26.4 million budget for the utilities’ CORE programs. The PUC wants to increase this charge by roughly half a penny per kilowatt-hour. That works out to an extra $1.35 a month for the average residential customer, and about $21 a month for a small business.

For gas customers, it would be about a third of a penny per therm, or an average 59 cents a month for residents and $3.30 a month for a typical small business.

That may not seem like much, but it would amount to a big increase in the SBC contribution: utilities would have $100 million to promote energy efficiency.

“We are really excited with this opportunity to expand,” said Eversource’s Peters. At deadline, the utilities were drawing up plans to do so.

So far all this has gone on under the radar in a PUC docket, especially since environmentalists and the utilities are in agreement that this would actually reduce electric rates.

In addition, the PUC has taken the position that the plan does not need to go before the Legislature. The state has capped how much of the SBC can go to low-income programs, but not to energy conservation.

That could change, since rates could start going up right when lawmakers return in January.  Although the program won’t start until 2018, the PUC has designated 2017 as a transitional year. It will need to start raising the SBC in that year to gear up for 2018.

The utilities expect to increase their spending in 2017, from $26.4 million to roughly $30 million, or more than 10 percent.

In addition, the SBC increase would be offset by an increase in energy efficiency. It turns out that payments from regional grid operator ISO New England for capacity to handle peak demand – known as “forward capacity payments” – apply to energy efficiency as well as power plants stocking extra fuel. 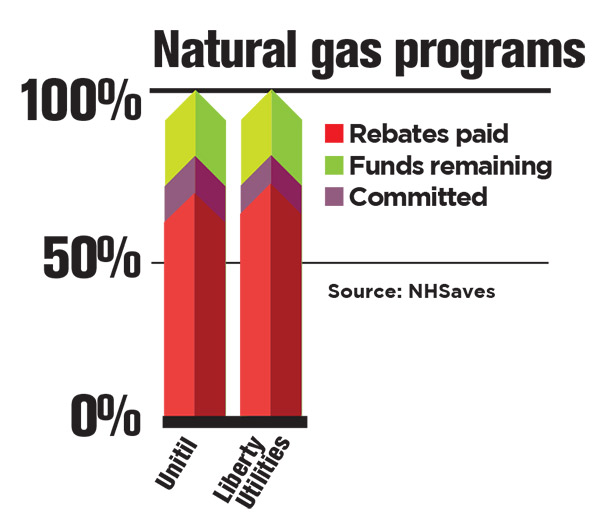 No matter the size of the 2017 increase, it has already grabbed the attention of some lawmakers.

Sen. Jeb Bradley, R-Wolfeboro, understands that sometimes you need to spend money to save money, “but I’d like to see the actual data to back that up, that the savings at the peak justify these expenditures, a huge new uptick in costs.”

He was a little miffed that the PUC hadn’t tried to make its case before deciding on a standard. “They would be well advised to come up with the hard data that this is going to actually save money if they think they don’t need to talk to us, OK – we’ll see about that.”

Rep. Michael Vose, R-Epping, a member of the House Science, Technology and Energy Committee, already has penned an op-ed opposing the EERS. He told NH Business Review that it was “another mandate, another fee on electrical ratepayers.” And while he said the increase is “admittedly small, it all adds up” when you put it on top of the current SBC, and costs added by Renewable Energy Portfolio Standard and RGGI.

But PUC Consumer Advocate Donald Kreis says states that have applied an EERS standard do save more energy than those that don’t.

Hawes said that Acadia hasn’t seen this “rebound” effect to be significant.   “There is only so much electricity you can use,” she said.

RGGI offers another source of statistics about the effect of energy efficiency on savings, citing statistics that show energy usage and costs have gone down more in RGGI states then their counterparts.

The same argument about the EERS standard could be applied to RGGI, though that debate is happening in entirely different arenas.

First, nobody sees the cost of RGGI on their bill. It’s a charge power producers pay to emit greenhouse gases set by an auction process, which is determined largely by an emissions cap in the nine-state region, including the New England states and Delaware, Maryland and New York. Although the theory is that much of the proceeds go to energy-efficiency programs, each state has the right to do what it wants with the funds.

New Hampshire used to put the entire amount into energy-efficiency programs, mainly run by the PUC, but a change in state law resulted in dedicating only the first dollar of the amount paid at auction for utilities’ efficiency programs, with the rest rebated to customers.

In addition, RGGI has been a victim of its own success, as well as that of other energy-efficiency programs, which help lower the demand for power. Power producers don’t have much trouble meeting the emissions cap, so they don’t need RGGI allowances as much, meaning the price has been low, and less has been raised at the auctions. In New Hampshire, RGGI only accounts for $2.5 million of the money used by the CORE programs, or a tenth of the budget.

But that also could change. Every four years, officials from the nine states update the program. Last time they did, in 2012, the states agreed to lower the cap by 2.5 percent a year. This year, environmentalists want to accelerate that decrease to 5 percent annual reduction.  That could double the costs involved, meaning a lot more money for energy efficiency, but also higher electric prices. Massachusetts has agreed to the change, but New Hampshire is still making up its mind.

“It’s too early to tell,” said Joe Fontaine, a DES Division of Air Resources official who attends the negotiations on behalf of New Hampshire. “We have to see what impact it will have on the state, but we have been a leader in this, and I hope we will be a leader going forward.”

Unlike the EERS, whatever is approved regionally must go before the Legislature. Actually, RGGI comes up every year in front of lawmakers anyway.

Last session, Sen. Dan Feltes, D-Concord, put forward a  bill that would take away the rebate to residential ratepayers, putting all of that money into residential and municipal energy-efficiency programs, while totally rebating the proceeds to commercial ratepayers and eliminating the money allocated. The BIA supported this bill, but it didn’t pass.

If the status quo remains, tightening the regional lid on the RGGI cap won’t squeeze out any more energy-efficiency money for the Granite State. If the CORE energy program was funded more by RGGI, it wouldn’t need as large a contribution from the SBC. But it could make a big difference in other states, and that in turn could lower demand on the grid and lower prices, no matter what New Hampshire does.