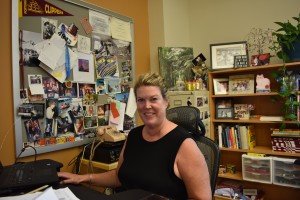 Erin Bakkom, a veteran social studies teacher at Portsmouth Middle School, said she fears that new teachers, in less supportive communities, might feel they have to change the way they teach. (Adam Drapcho photo)

It’s been a little more than a year since a state law, regulating the teaching about racism, sexism and other forms of prejudice, went into effect. While no educators have been punished, or even investigated, according to a response to a Right to Know request, that doesn’t mean that the law hasn’t had an impact.

Several professionals say that having such a law on the books – one that deputizes the public to report alleged violations, and one that could result in a career-ending loss of teaching license for the offender – has changed the way that they go about their work

The law, known technically as the Right to Freedom From Discrimination in Public Workplaces and Education, was signed by Governor Sununu on June 25, 2021, as part of the biennial budget package. The new law prohibits teaching in any K-12 public school that any person is deserving of discrimination due to inherent characteristics like race, sex or physical ability, or that any person is inherently racist, sexist or otherwise prejudiced.

The law’s constitutionality is currently being challenged in a suit brought by individual educators as well as the state’s two main teachers’ unions, who claim that the language of the law is too vague and that it infringes on the First Amendment rights of teachers.

How, exactly, does this law affect classroom instruction and discussion?

“It’s been an open question for over a year,” said Deb Howes, president of American Federation of Teachers-NH, one of the lead plaintiffs in the suit against the state. In her view, the state statute, a revised version of a piece of failed legislation that itself was modeled after an executive order by former President Trump, was a solution to a problem that didn’t exist in New Hampshire.

“They passed a law for something that no one was doing,” Howes said. “No one was out there teaching that someone was inherently racist or deserved to be discriminated (against).”

Even so, the way the law is enforced, by encouraging parents who hear their child’s account of what happened in the classroom to report to the state’s Commission For Human Rights, has had what Howes called a “chilling effect” on lesson planning.

For example, Howes said, the novel “To Kill a Mockingbird,” which tells the story about how a Black man was wrongfully accused of sexual assault, was routinely assigned by teachers and discussed in classes. Now, teachers who don’t want to have to defend themselves in front of a panel in Concord are inclined to choose a safer text, she said.

“The story is about racism in a small town,” Howes said about the Harper Lee classic. “How do you discuss the story of ‘To Kill a Mockingbird’ without talking about racism?”

Howes said the law has created an “atmosphere of fear” that is steering teachers away from discussions that they may have felt comfortable having with their students two years ago.

“There will be more caution, more concern about discussions that touch on racism, there will be more caution about discussions that acknowledge different gender identities,” Howes said. The teachers will change their lesson plans to preserve their careers, and the quality of instruction won’t be the same. Howes asked, “How is that ok for our students?”

Erin Bakkos, a teacher at Portsmouth Middle School, said the new law affects some instructors more than others, but specifically has social studies teachers in its focus.

There’s a big problem with the debate around so-called “divisive concepts” in education, according to Bakkos, and it’s that the adults having the debate don’t know what is happening in contemporary social studies classrooms.

“Our pedagogy has changed,” Bakkos said. “There is a shift in teaching that’s happened, and I don’t think people are aware of it.”

A generation ago, most social studies instruction followed what Bakkos called a “teacher-focused” model, one which frequently relied on a single textbook, and in which the goal was to get students to remember historical facts.

Today, though, Bakkos said a social studies class engages in “inquiry by design,” or “student focused” instruction, in which the goal is for students to learn how to evaluate multiple viewpoints, determine which source material is credible, and make and defend their own conclusions.

“It has totally shifted to skills-based, applying critical thinking skills,” Bakkos said. It’s not memorizing the correct answer, but, “How do you support your answer with evidence?”

When dealing with historical sources – say, propaganda posters from World War I – there are clear examples of racist or sexist viewpoints. A teacher might initiate a discussion around these materials, but can’t have complete control over how that discussion develops.

Bakkos is a veteran teacher and works in a community that she said supports an environment of diversity, inclusivity and equity in the classroom. She has held firm in her own lesson- planning, but imagines that educators in a different school, or a different place in their careers, might not feel so assured.

“For a lot of people, they don’t want to say the wrong thing, so the safest way to not say the wrong thing is to not have these conversations. And that is a loss for the kids,” Bakkos said. “I have concerns as a teacher that has done this for 24 years, what does this look like for a new teacher, in a community that doesn’t have support for equity?” 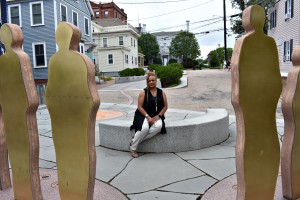 JerriAnne Boggis, executive director of the Black Heritage Trail NH, is concerned that schools might be fearful of teaching the state’s complicated history as it pertains to race, which might allow parts of it to be forgotten. (Adam Drapcho photo)

History that isn’t taught is history at risk of being lost, which is what concerns JeriAnne Boggis, executive director of the Black Heritage Trail of NH, about the law.

“It directly affects our history,” Boggis said. “We care about telling a truer history that some people might call divisive. We just call it telling the truth.”

The Black Heritage Trail seeks to tell a fuller history of New Hampshire, how enslaved Africans and African-Americans was a part of the state’s daily life since Colonial days. Without a champion for that history, it is often erased, she said.

That was literally the case with the African Burying Grounds, a cemetery in downtown Portsmouth between Court and State streets. In the 1700s, the area was on the outskirts of town, and was actively used as a place to inter deceased people of African descent. It is thought that around 200 people were buried there, but then forgotten.

By the 1800s, the area was paved over and streets and houses were constructed. It wasn’t until 2004, when a municipal construction project found human remains there, that the history was rediscovered. Today, there’s a memorial in place to honor those who were buried there and, until recently, forgotten.

The new state law doesn’t directly affect the Black Heritage Trail in the same way that it does public educators, Boggis said. But it has had an effect on how the nonprofit organization pursues its mission.

Prior to the law’s passage, the Black Heritage Trail was often invited to give guest history lessons at public schools. Those invitations have stopped, though, Boggis explained, because educators don’t want to gamble with speakers who deal with sensitive topics.

“What the law has done, it’s so vague,” Boggis said. “Because of its vagueness, and because of certain community pressures, if a teacher goes beyond what some people deem acceptable, they become a public target.”

History is complex by its nature, and telling the perspective of historically oppressed people can cloud the view of figures often held up as heroes. However, it’s necessary to have those uncomfortable conversations so that the various members of a society can move together with common understanding, Boggis said.

“Let’s talk about the African Burying Ground. It was defamed, it was erased. In death, like in life, they were devalued,” Boggis said.

In response to the state’s new law, the Black Heritage Trail is developing a curriculum for teacher-guided tours, so that a fuller version of the state’s history can be shared with students, and schools can have control over the discussions that might arise.

The tours are being developed for grades 7 and 8, and will explain how the Fugitive Slave Act was enforced in New Hampshire, where there were “sundown” and “warnout” strategies that established racial homogeny in many small New England towns, and how Ona Judge, an enslaved woman, defied the demands of the country’s first president to live out her life free, in New Hampshire.

“If we really want to live up to what America is, then our history also has to reflect that,” Boggis said. The creation of the teacher-led lessons was an example of turning lemons into lemonade,” she explained. “How can we best serve teachers that may be nervous about teaching this history?”

Several years ago, Stay Work Play NH, a nonprofit organization with a mission of enticing more young adults to build their life in the Granite State, conducted a widespread survey to try and identify why they were choosing to live elsewhere. 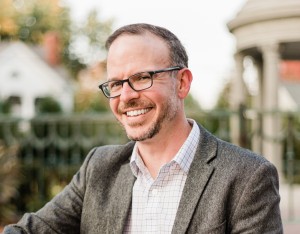 “One of the reasons young people might leave New Hampshire is a lack of diversity,” said Will Stewart, executive director of the organization.

The reason Stay Work Play exists is because of a troubling demographic trend of the state getting older, and this new law only makes Stewart’s job harder.

Young adults who grow up in New Hampshire leave, Stewart said, because they want to live somewhere with more diversity. Meanwhile, people of color have a perception of the state as “old, cold and white,” Stewart said, and this law will only reinforce that perception.

“I think it perhaps contributes to the state’s reputation – to a number of people, particularly young people of color that we have spoken to – New Hampshire is a white and unwelcoming state to people of color,” Stewart said.

One way to combat the perception of the state as unwelcoming is to elevate the voices of people who have found a home and success here, which Stay Work Play is doing, Stewart said.

“In the spring, we had a conversation with young artists of color, young entrepreneurs of color, working to help these young people become more visible … We do have young people of color here, but they’re not visible.”

The new law poses gives such efforts a headwind, though.

“A law like this,” Stewart said, “It’s just one more thing that’s going to make it harder to both attract and retain people of color who are here.”

This article is being shared by partners in the Granite State News Collaborative as part of our Race and Equity Initiative. For more information, visit collaborativenh.org.