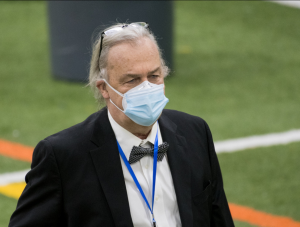 The late House Minority Leader Rep. Renny Cushing of Hampton was one of the original plaintiffs in the Covid-related suit.

The lawsuit filed by seven disabled Democratic House members to require the House Speaker to provide a remote option for legislators with medical conditions that make them especially vulnerable to Covid-19 may be headed to the U.S. Supreme Court.

The federal lawsuit filed in February 2021 argues the Americans with Disabilities Act requires accommodations be made for them to do their work remotely.

The lawsuit has so far bounced back and forth between U.S. District Court in Concord and the First Circuit Court of Appeals in Boston.

So far, House Speaker Sherman Packard’s argument that the lawsuit is barred because of legislative immunity has prevailed.

The plaintiffs have recently amended their original complaint. And while no action has yet been taken in U.S. District Court on the amended complaint, plaintiffs’ lawyers have asked the U.S. Supreme Court to review the First Circuit’s decision.

“The question in this case is whether the doctrine of state legislative immunity trumps the right of disabled legislators to avail themselves of the protections of federal disability rights statutes,” according to the U.S. Supreme Court filing.

The plaintiffs want to argue that this is an extraordinary situation where people’s lives are at risk. “Legislative immunity was not intended to insulate state actors for putting people in harm’s way. The purpose of legislative immunity is to allow legislators to legislate, the opposite of what’s happening here,” said their attorney Israel Piedra.

“We’re asking the U.S. Supreme Court to review the First Circuit Court’s decision in May that legislative immunity barred our claims,” he said.

Very few cases like these are accepted by the U.S. Supreme Court.

The lawsuit will continue as well in the U.S. District Court on a parallel track.

The lawmakers named in the suit include two then-House members, Minority Leader Renny Cushing and Katherine Rogers, both of whom have since died. Cushing died from cancer and complications from Covid-19. The ongoing plaintiffs include House Reps. David Cote, Kendall Snow, Paul Berch, Diane Langley, Charlotte DiLorenzo and the state Democratic party.

In the amended complaint, at-risk House Democrats claim the failure to provide remote access to sessions has violated their and their constituents’ constitutional rights.

The complaint claims the continued denial of remote access to members facing death if they contract Covid-19 has led to a partisan advantage for Republicans and violates the federal Americans with Disabilities Act and Rehabilitation Act, and the 1st, 11th and 14th articles of the U.S. Constitution.

“The more permanent and enduring nature of the risk to Plaintiffs means that the failure to provide adequate accommodations is a complete exclusion of persons with qualifying disabilities from participation in democracy and a complete disenfranchisement of their constituents,” according to the amended filing.