State funding for public higher education in New Hampshire lags behind funding levels in most states, even after recent increases in state support.

Data collected from all 50 states show New Hampshire has the lowest level of state funding for public higher education on a per capita basis in fiscal year 2022. The State also has the lowest funding level of the 50 states relative to personal income.

Interstate comparisons show students graduating from New Hampshire higher education institutions with debt have the highest average debt of any other state. Federal data also show New Hampshire had the highest percentage of recent high school graduates leaving the state to attend four-year institutions of any state in the fall of 2018. Relatively low state public funding levels may make affording college more difficult for high school students who might otherwise seek to stay and obtain a degree in New Hampshire, which has implications for the growth of the state’s workforce and the well-being of Granite Staters. 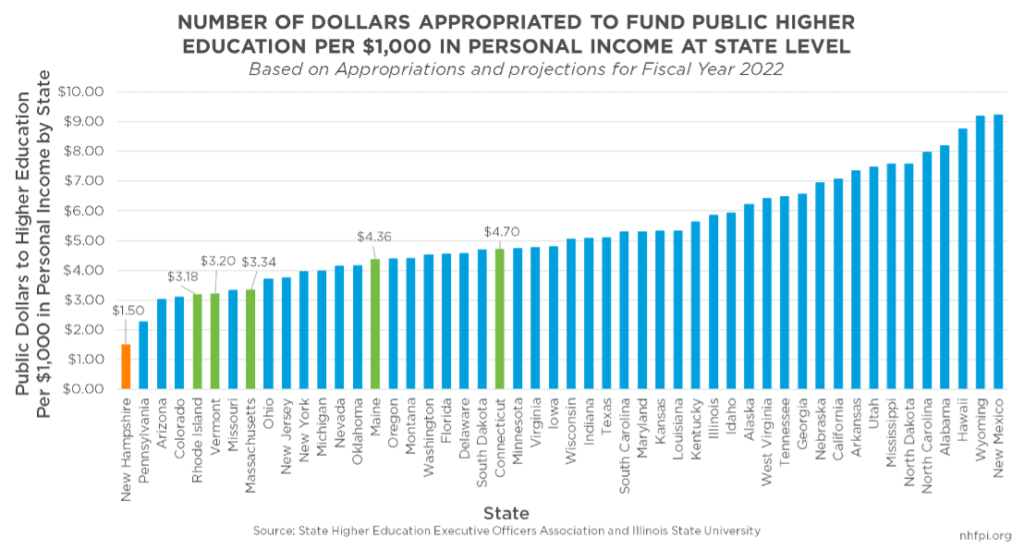 The changes in funding in recent state budgets, including past one-time appropriations and enhanced operating grants, have increased state funding for public higher education relative to the low levels in the years immediately following the Great Recession of 2007-09.

These same Illinois State University estimates indicated that New Hampshire fell behind all other states in two key metrics for funding of public higher education. The first measure is relative to state populations.

The second key metric calculated with these data gauges state support for public higher education relative to personal income in the state.

Student decisions regarding whether, where and when to seek out higher education are complex and affected by many factors, including financial considerations. While high school graduates and older adults may decide for non-financial reasons to not attend college or to leave the state to attend school elsewhere, cost considerations can still have significant and consequential impacts on the decisions of potential students.

Comparing all 50 states based on the average published tuition and fees for full-time in-state students attending four-year public institutions in the 2021-22 school year, New Hampshire had the second-highest cost, at $17,040, behind only Vermont ($17,750). The College Board reported national average of $10,740, while Florida ($6,370) and Wyoming ($6,100) had the lowest costs.

These higher costs may have consequences for students long after they leave school.

Student debt is the second-largest contributor to total debt nationally, after mortgages for homes. An annually conducted analysis of student debt, published by the Institute for College Access and Success and based on surveys of institutions, found that students graduating from New Hampshire institutions had some of the highest average debt loads and were more likely to be in debt upon graduation. For graduates of both public and private institutions that grant bachelor’s degrees in New Hampshire from the class of 2020, approximately 70 percent of the students had debt upon graduation. That figure is the second highest of any state, suggesting New Hampshire students were more likely to graduate with debt than in other states.

For students who had debt, New Hampshire had the highest average debt amount of any state, $39,928, a slightly larger amount than similar figures for Delaware and Pennsylvania. For comparison, the reported average debt was below $30,000 in 31 states. While these data only provide a limited insight based on voluntary survey responses of institutions, prior similar data collections have also shown New Hampshire-based institutions produce college graduates with the highest average debt loads in the country; these data continue to suggest that four-year students in New Hampshire are more likely to go into debt, and accrue more debt, than students in most other states. 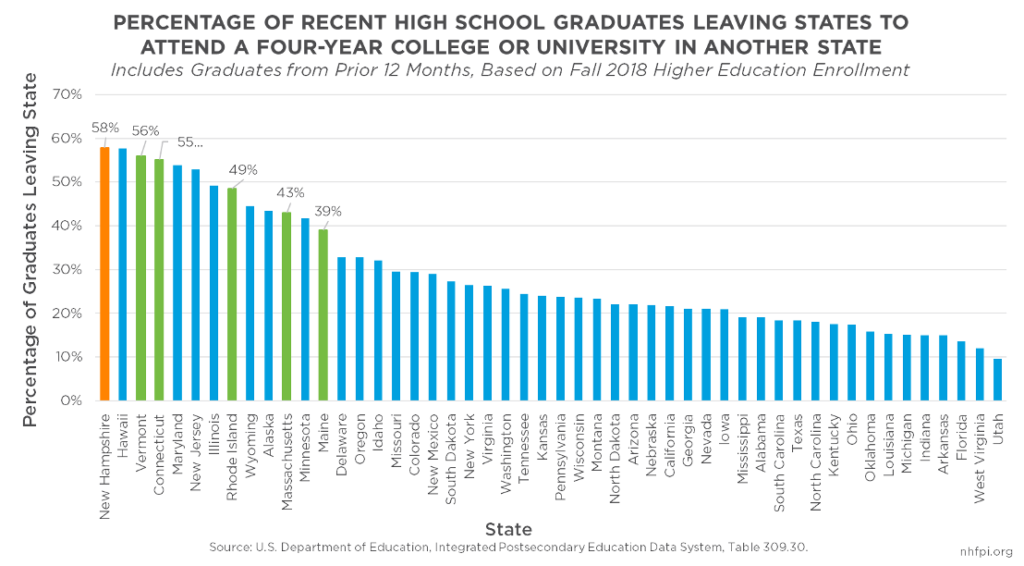 New Hampshire high school students attending four-year institutions shortly after graduating are more likely to leave their home state to attend college than in any other state. While 74 percent of high school graduates attending a four-year college within 12 months of receiving their diploma nationwide remained in their home states for college in fall 2018, data from the U.S. Department of Education show only 42 percent of New Hampshire high school graduates remained within the state’s borders to attend a four-year college, while 58 percent left the state. This percentage of students leaving was the highest of all 50 states, and slightly higher than the figure for Hawaii.

Geography likely has a key role, as many states with smaller land areas lose a relatively high percentage of college-bound high school students to institutions in other states. However, other northeastern states that are geographically small relative to many states elsewhere in the country still lose a substantially smaller percentage of their four-year college-bound high school students, including Rhode Island (49 percent), Massachusetts (43 percent), Maine (39 percent) and Delaware (33 percent).

The relatively high cost of public higher education in New Hampshire is likely due in part to comparatively low levels of state support for institutions of higher education, and in turn may result in more Granite State high school students leaving New Hampshire for other educational opportunities than would have with the option of lower in-state tuition.

Given the demographic trends that are impacting and will continue to impact New Hampshire’s economy and labor force, retaining young workers in the state is key for the state’s economic vibrancy and the future prosperity of all Granite Staters.

Phil Sletten is research director of the NH Fiscal Policy Institute, which is sharing this these articles with the partners in the Granite State News Collaborative. NHFPI is an independent nonprofit organization that explores, develops and promotes public policies that foster economic opportunity and prosperity for all New Hampshire residents.