Eric Fossum to be honored for groundbreaking invention 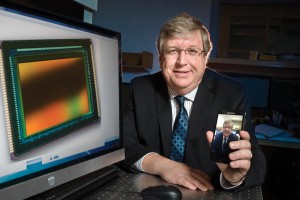 Dartmouth College Professor Eric Fossum, inventor of the technology behind almost all cell-phone cameras, webcams, and many digital-still cameras.

Eric Fossum, a Dartmouth College professor who specializes in emerging technologies, has been announced as a winner of a 72nd annual Technology and Engineering Emmy Award.

Fossum is being honored for inventing and pioneering the intra-pixel charge transfer CMOS (complementary metal oxide semiconductor) image sensor, which is the basis for such devices as cellphone cameras, webcams and digital-still cameras.

The honor, a first for Dartmouth engineering faculty, will be presented by the National Academy of Television Arts and Sciences. He will be presented with the award in a virtual ceremony scheduled for October.

“First and foremost, it makes me happy to see people using the technology to have fun and enjoy life. But honestly, it is also a little hard to wrap my head around how much impact it has had on society and business and medicine and so many facets of modern life,” said Fossum.

Fossum invented the CMOS active pixel image sensor while working at the NASA Jet Propulsion Laboratory at Caltech. The technology was further developed by spinoff Photobit and Photobit’s partner, Eastman Kodak. Both Eastman Kodak and ON Semiconductor, which acquired yet another spinoff of the Photobit technology via Aptina, are also being honored with Emmy awards.

After working at the NASA lab, Fossum co-founded several startups and served as CEO. At Dartmouth, he developed the Quanta Image Sensor photon-counting technology with his students and co-founded Gigajot, which is based in Pasadena, Calif.