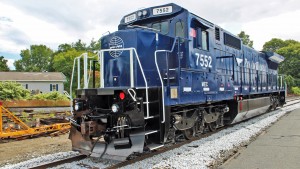 The Surface Transportation Board, the federal agency that regulates railroads, has at least stalled and perhaps stymied CSX Transportation’s bid to acquire Pan Am Railways.

In applying to the board, CSX said the deal was a ”minor transaction,” requiring a less extensive and stringent review process by the board. However, the board received comments from a number of interested parties, including the states of Massachusetts and Vermont as well as their congressional delegations, urging the board to treat the proposed acquisition as a “significant transaction” that would undergo more lengthy and rigorous consideration before regulators reached a decision.

The board directed CSX to perfect its application by submitting more information about the competitive effects and operating plans associated with the merger as well as a procedural schedule and appropriate filing fee for reviewing its fresh application.

Essentially, the board sent CSX back to square one, ordering the company to submit an increased filing fee and procedural schedule by April 1 if it chooses to proceed and a fresh application between April 25 and June 25.

Apart from asking the Surface Transportation Board to designate the transaction “significant,” both Massachusetts and Vermont have questioned the impact of the merger on competitive freight service. Massachusetts has sought assurances that measures will be taken and sustained to protect water supplies at the Wachusett and Quabbin reservoirs. And the Massachusetts Bay Transportation Authority expressed concern about the effect increased freight traffic on commuter rail service.

“I was disappointed all these guys came out of the woodwork,” said Peter Leishman, who owns and operates the Milford-Bennington Railroad, which connects to Pan Am’s Hillsboro Running Track between Nashua and Wilton and extends rail service 18 miles to Bennington. He looked forward to working with CSX, which as a publicly held company operates with more transparency than Pan Am, which he said is privately owned by Timothy Mellon, heir to the Mellon family fortune, and other investors.

Leishman said that, unlike Pan Am, “CSX reached out to us about how to improve and expand the service.”

Several years ago, he said, Pan Am sought to require the Milford-Bennington Rail Road to offload gravel from Granite State Concrete bound for Milford to its track at Wilton, but was thwarted by the Surface Transportation Board. He said the presence of CSX would offer his railroad the prospect of restoring service to Monadnock Paper Mills Inc., which was been curtailed amid disputes with Pan Am.

With the transaction in limbo, Leishman suggested the state should take steps to ensure that Pan Am continues to maintain its track in the meantime.

The New Hampshire Department of Transportation has filed a notice to participate in the proceedings, but has yet to submit a comment.

Patrick Herlihy of NHDOT said the department is “an interested party” that has taken a “neutral” position and “wait-and see” approach to the transaction, stressing that “we’re getting a lot of information.” Unlike Massachusetts and Vermont, where Pan Am operates on track owned by the state, New Hampshire’s interests are less direct, he suggested.

Without disclosing specifics, Herlihy said his agency has had conversations with CSX, adding that the state’s primary interest is to “create more opportunity for freight service in New Hampshire and take trucks off the roads.”

He said the New Hampshire Main Line, running 40 miles from Nashua to Concord is the preferred route for commuter rail service. Last year, the state contracted with AECOM Technical Services Inc. of Manchester to study the development and engineering phases of the project, which Herlihy said are underway.

When the Executive Council met this week, NHDOT Commissioner Victoria Sheehan was asked about the transaction by Executive Councilor Ted Gatsas, a Manchester Republican who reminded her the New Hampshire Main Line runs through his district. She said that the question of how to treat the transaction was pending before the Surface Transportation Board and that she would prepare a presentation for the next meeting of the council.

Leishman said the decision by the board has cast a cloud over the future of the transaction. He said that CSX expected to close the merger by September “but now it will take until next year. If it gets into the weeds, it could take longer. And there’s no guarantee.”