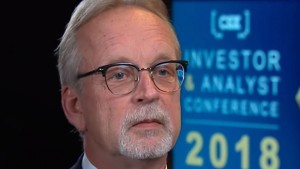 Jim Foote, president and CEO of CSX Transportation, assured the federal Surface Transportation Board on Thursday that his company’s proposed acquisition of Pan Am Railways would include the prospect of extending passenger rail service to New Hampshire.

“There is no issue in New Hampshire,” Foote said twice. “We are willing to consider the introduction of passenger service.” He added that CSX is “committed to rebuilding the rail network of Pan Am.” The network includes the New Hampshire Main Line, 40 miles of track running between Nashua and Concord, the route of the Capitol Corridor Project where preliminary engineering and design work for providing commuter rail service is currently underway.

Foote spoke in response to questioning from STB board member Robert Primus, who sought assurances that the merger would accommodate the expansion passenger rail service as well as the growth of freight traffic in New England, particularly in the metropolitan Boston area.

At the STB hearing, Patrick Herlihy, Director of the of Aeronautics, Rail and Transit at the NH Department of Transportation, reaffirmed the state’s support of the merger. Last June, Gov. Chris Sununu submitted a letter to the STB affirming that the acquisition would benefit the state. He wrote that the transaction “will bring financial resources to the table for much needed infrastructure improvements throughout Pan Am’s rail network operating in New Hampshire and honor all agreements with shippers, licensees and other entities that may also operate on the line in the future.”

Massachusetts officials are still seeking assurances that existing commuter services will not be disrupted and new services will be added. And Canadian Pacific has questioned whether the main line from Mechanicsville, N.Y. and Ayer, Mass., will remain viable when intermodal and automotive traffic is diverted around the Hoosac Tunnel on CSX’s main line from Albany to Boston.