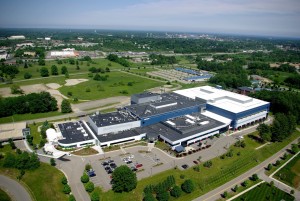 Moderna Inc.’s CEO now says the company’s eagerly awaited Covid-19 vaccine won’t be ready until November – after the election – but as soon as it is set, a key part of production will begin almost immediately at Lonza Biologics’ plant in Portsmouth.

In an interview Wednesday with the Financial Times, Moderna CEO Stéphane Bancel said the company will not seek emergency approval from the Food and Drug Administration for use by frontline medical workers and at-risk individuals until Nov. 25 at the earliest. And, he said, the vaccine won’t be available for widespread distribution until at least spring 2021.

He told the FT he expected approval of the vaccine coming in the late first quarter or early second quarter of 2021, calling that “a reasonable timeline, based on what we know from our vaccine.”

Meanwhile, officials at Lonza told Reuters that they’re confident that the U.S. and Swiss plants where it will help make Moderna’s Covid vaccine will be ready for commercial production this year,

Officials said new production lines at Lonza’s site in Portsmouth will be making vaccine ingredients in November, and three production lines at a plant in Switzerland Alps should begin delivering vaccines produced there by December. He said the company will supply 300 million vaccine doses annually.

Lonza has a 10-year contract to supply ingredients to Moderna.

The Moderna vaccine is experimental, since it relies on technology that uses genetic material that enlists human cells to help trigger an immune response – technology that has never been approved before.

Meanwhile, CNBC reported that five participants in two of the coronavirus vaccine trials reported they are experiencing high fever, body aches, bad headaches, day-long exhaustion and other symptoms. Three of the participants are involved in the Moderna study and the other two in Pfizer’s.

But they did tell CNBC that they think the discomfort is worth it to protect themselves against the coronavirus.

Also on the vaccine front, ActivMed, a Portsmouth clinical research center, said it is participating in the trials for the vaccine being developed by AstraZeneca.

Also located at Pease, ActivMed said it is seeking to get at least 1,000 participants into the trial for AstraZeneca’s AZD1222 vaccine.

ActivMed is one of 62 sites across the U.S. for AstraZeneca to test the safety of its vaccine on a total of 30,000 participants. It is the only site in New Hampshire currently being used for a vaccine study.