Workforce shortage has already made finding drivers hard, but pandemic has upped the ante 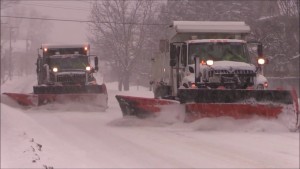 As New Hampshire gears up to keep the roads clear during snowstorms, the possibility of Covid-19 sidelining drivers looms large, particularly because there aren’t as many drivers as there once were.

“Each and every year it’s getting tougher to get contractors,” said David Gray, winter maintenance program specialist for the state Department of Transportation. “It’s a dying industry; nobody wants to drive trucks any more.”

It’s not just snow-plow truck drivers, either. The American Trucking Association estimates the U.S. has at least 50,000 fewer drivers for commercial trucks than are needed.

As happens every year at this time, Gray is in the process of hiring contractors who will supplement state DPT employees to drive snowplows on New Hampshire’s 9,366 miles of turnpikes and other state roads. Contractors usually provide about half of each winter’s plowing, he said, although it varies from season to season.

The state contracts a few pickups to clear around toll booths and in park-and-ride lots where maneuverability is important, but clearing snow off major roads requires large commercial vehicles such as 10-wheel dump trucks.

“I have a lot of phone calls from guys with pickup trucks, up to one-tons, but you can’t plow 93 with a one-ton. You can try, but it won’t work,” Gray said, referring to the largest style of pickup trucks, such as the Ford F-350 or the Silverado 3500.

The complication is that these drivers must have a federal Commercial Drivers License, or CDL, and competition for CDL drivers is getting fierce, Gray said.

One problem is that Massachusetts lures contractors with more money. New Hampshire pays from $30 to $54 an hour depending on size of the truck and whether spreading sand and salt is involved, plus extra for having other equipment such as snow wings or a hydraulic hoist.

New Hampshire does have one contractual advantage in luring drivers, Gray said: It guarantees payment for 10 hours every two weeks even if there are no snowstorms. “Last winter there was really no snow, winter before, really no snow,” he said, which removed the advantage of Massachusetts’ higher pay.

There are other causes for the shortage, Gray said, including one that’s common around the country: recreational marijuana showing up on drug tests.

Many states, including Massachusetts, allow recreational use of cannabis. But the CDL is a federal license, and cannabis is still a Schedule 1 drug whose consumption is forbidden under federal law.

“If you smoke it and test positive on a drug test it doesn’t matter what the state says, the federal government says its illegal,” said Gray.

The state Department of Transportation has 93 sheds around the state where trucks, equipment and salt or sand supplies are kept. Each has between three and 15 DOT workers, Gray said, although that number can double with contractors.

If one of those employees gets Covid-19 it’s possible that everybody will have to quarantine for a week or two.

“If Covid goes into a shed and wipes out a shed, then we’ve got to figure out some way of getting that road taken care of. If you’ve got 10 operators, you’ve lost 10 trucks,” Gray said. “You have to sanitize the shed, find new operators to go into these seats.”

It’s not beyond the realm of possibility that a Covid-19 outbreak timed with a Nor’easter could leave some roads unplowed.

“Every state is worrying about the same thing,” said Gray. “Unless you work at a ski area, we’re all hoping for no snow this year.” — DAVID BROOKS/CONCORD MONITOR