Could passenger rail hopes in New Hampshire be sidetracked by CSX deal? 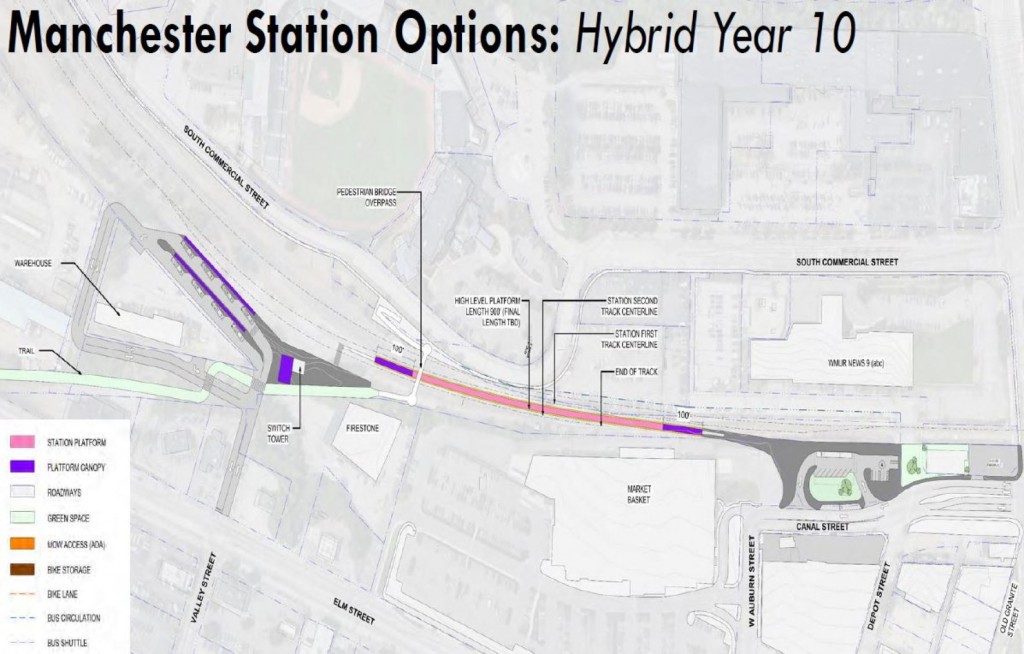 A map shows one of the recommended train platforms proposed for Manchester. This one is near the right field wall of Northeast Delta Dental Stadium as one of two entry points.

With $66 billion in the infrastructure package currently before Congress, Amtrak is bidding to expand its passenger rail service to New Hampshire, perhaps as far north as Concord.

On Aug. 30, Amtrak officials met with Manchester Mayor Joyce Craig, Congressman Chris Pappas and local business executives at Northeast Delta Dental Stadium in Manchester, near one of two preferred sites for a railway platform in the city, to rally support for the project.

Patrick Herlihy, director of the state Bureau of Aeronautics, Rail and Transit at the New Hampshire Department of Transportation, said, “We’ve been having these conversations and discussions with Amtrak and the Federal Railroad Administration for the past couple of years. Right now, we’re just listening,” he added. “We’re in the discovery phase.”

But interest in expanding passenger rail service in New Hampshire is mounting against the backdrop of the prospective acquisition of Pan Am Railways by CSX Transportation. CSX’s bid for Pan Am’s network and Amtrak’s aim to expand its service are not an easy fit.

Aecon Technical Services Inc. of Manchester is currently engaged in preliminary design and engineering of a commuter rail line along the corridor, undertaken in partnership with the Massachusetts Bay Transportation Authority, which would extend its service from Lowell, Mass., to Nashua and Manchester — and perhaps Concord.

Meanwhile, Amtrak is also eyeing the corridor to carry its intercity passenger service to New Hampshire. Herlihy noted that Amtrak and the MBTA operate passenger and commuters between Haverhill and Boston on the tracks that carry the Downeaster.

A study conducted in 2015 found passenger rail line would result in 5,600 permanent jobs, 3,400 construction jobs to build the real estate development triggered by rail and 3,600 residential units to support new employees moving to the region. In addition, the study found the rail line would spark development of 1.9 million square feet of commercial real estate and $750 million in real estate investment.

In June, Amtrak challenged CXT’s bid for Pan Am in a filing to the Surface Transportation Board, the federal agency which must approve it. At the time, Amtrak CEO Bill Flynn called the transaction “a significant threat to the American traveling public,” which will “negatively impact current passenger train service and future routes in Massachusetts and northern New England.”

At the end of August, Amtrak reiterated in even stronger terms its opposition to the transaction.

In an 88-page filing with the Surface Transportation Board, Amtrak urged the panel to impose conditions on the transaction to alleviate what it said would be adverse impacts on passenger rail service.

“While rail consolidations have been good for freight railroads and their investors,” the filing reads, “they have not been good for Amtrak and its passengers.”

And Amtrak takes singular aim at CSX, which it charges “has consistently taken the approach of obstructing the expansion of passenger rail, and to limit access to its facilities, despite the fact that CSX is statutorily required to prove Amtrak with access to its rail lines.” CSX, the filing claims, “has a history of stonewalling Amtrak’s requests for additional service.” While CSX has claimed Amtrak will benefit not suffer, from its acquisition of Pan Am, Amtrak dismisses the assurance as “illusory.”

Amtrak is asking the board to impose seven conditions on CSX’s purchase of Pan Am, including ordering CSX to negotiate with Amtrak and third parties, particularly state agencies, to expand existing and develop new intercity passenger services, especially on Pan Am routes.

Meanwhile, Gov. Chris Sununu, along with the state Department of Transportation and a number of elected officials, have thrown their support behind the transaction. At the end of August, both Pappas and Congresswoman Ann McLane Kuster urged the Surface Transportation Board to ensure that CSX negotiate and cooperate in good faith to resolve the issues required to balance passenger and freight rail service, particularly along the Capitol Corridor.

Amtrak aside, filings with the Surface Transportation Board indicate widespread support for CSX’s acquisition of Pan Am among commercial shippers and public officials across New England. And the day Amtrak filed its latest objection, the Northern New England Passenger Rail Authority, the agency that has championed passenger rail in the region since 1995 and sponsors the Downeaster, endorsed it.