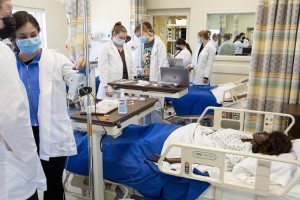 Colby-Sawyer College in New London plans to build a new $10.5 million building for its nursing and health sciences program. It is expected to open in May 2024. (Alex Driehaus-Valley News/Report For America)

Aiming to expand its role in addressing the region’s nursing shortage, Colby-Sawyer College plans to construct a new $10.5 million academic building for its nursing and health sciences program.

Slated to open in May 2024, the facility would consolidate the New London college’s nursing and health sciences classes in a 20,600-square-foot building with state-of-the-art technology in the classrooms and laboratories, Colby-Sawyer President Sue Stuebner said in an interview. The two-story building would have capacity for 730 students and 26 faculty members. “The need for nursing is just dire in our region and in the state,” Stuebner said. “We continue to try to do our part.”

The project builds on a longstanding relationship with Dartmouth-Hitchcock Health. The two organizations announced in January 2020 a pledge by D-HH to invest $3.25 million to support the college’s expansion of its health sciences programs aimed at traditional college-age students, as well as professionals who seek to further their skills.

The college has since added a bachelor of science in health science, a program for registered respiratory therapists to get bachelor’s degrees, a master’s in nursing education and an online bachelor’s in health studies. The school also has been adding to its nursing and health sciences faculty.

Colby-Sawyer, which has an overall enrollment of nearly 1,000 students, has further pledged to increase enrollment in its undergraduate nursing program, expand its accelerated bachelor of science in nursing program and add additional health science programs such as a master’s degree in social work and a doctor of nursing practice degree, according to a news release.

About 65 percent of Colby-Sawyer nursing students go on to work in the D-H system, Stuebner said. The goal is to increase that percentage. The health system has started offering a loan forgiveness program and housing support, she said.

“Since our collaboration with Colby-Sawyer College began in 1981, our organizations have focused on addressing critical and emerging future workforce needs through the development of innovative academic programs,” Karen Clements, D-HH’s chief nursing officer, said in a statement. “We are very proud to support their investment as our partners in educating the next generation of clinicians and leaders.”

The new building is to include simulation laboratories, debriefing rooms, gathering spaces, study areas and a coffee bar so that students might stop in on their way to the library, Stuebner said.

The building, which has yet to go through the New London permitting process, is slated to replace the outdated Reichhold Center, Stuebner said. The site is on campus near the Dan and Kathleen Hogan Sports Center.

Stuebner said the project is “just getting started” and the college plans to work closely with New London officials in obtaining the necessary permits.

So far, the college has “commitments” for $7.9 million of the $10.5 million price tag, Stuebner said. Included in that is $1.5 million in federal funds that were allocated as part of the 2022 government funding legislation signed into law earlier this month by President Biden. That funding was part of $62 million Sen. Jeanne Shaheen, D-NH, is credited with bringing into the state.

“I pushed for these federal dollars to be included for Colby-Sawyer’s nursing program because we know about the incredible education and training provided at the college, which is a boon to our nursing workforce in New Hampshire,” Shaheen, chair of the Commerce, Justice, Science and Related Agencies Subcommittee, said in a news release. “As we fight our way through the pandemic, increasing our health care workforce — especially among nursing staff — is pivotal. Nurses are health care heroes and I’m thrilled to see this funding come home to New Hampshire to help train and educate the next group of these devoted professionals.”

The announcement of a new home for the School of Nursing & Health Sciences comes as health care providers across the country are struggling to find workers. A 2018 NH Business Review survey found that more than 2,000 health care worker vacancies in New Hampshire were left unfilled in 2018, with that number expected to climb as Granite Staters continue to age.

In addition to the federal funding, Stuebner said the planned new building has philanthropic backing. The college’s trustees have all made commitments to support the project.

“So many people resonate with the needs of health care,” she said. It’s apparent “in terms of their giving as well.”