Fair, nonpartisan district maps can be created, buy lawmakers have done the opposite 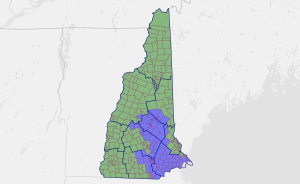 Under the proposed congressional map, 75 towns would be switched to a different district.

Redistricting should result in voting districts where elected officials represent the everyday concerns of their voters. The redistricting proposals by the NH Legislature for Executive Council, State Senate and House and Congress needlessly ignore these tenets of community-based representation.

Our Map-a-Thon Project team of New Hampshire citizens has demonstrated the best practices of redistricting to the voters and the legislature. We are guided by a concept called Communities of Interest (COIs), a nationally recognized redistricting best practice defined with the help of more than 300 fellow New Hampshire citizens. COIs include shared high school districts, shared services for police/fire/ambulance, water/sewer and health care, plus shared local priorities, such as pollution, traffic and poverty.

We demonstrated that nonpartisan redistricting can follow the rules, respect COIs, and be competitive – all factors that benefit the voters and the political parties. Not only have we drawn our own maps, but we’re using what we’ve learned to evaluate the maps from the Legislature. What we found is disturbing.

Compared to Map-a-Thon’s maps, the Legislature denied 16 more towns their dedicated House districts, in violation of the New Hampshire Constitution. A recent amendment slightly improved Rockingham County, giving Chester, Fremont and Hampstead their own House districts, but took a dedicated district from Newton. Even with the improvements, Rockingham County still had the highest number of towns denied a dedicated state house seat in the state.

The HB 52 Congressional District map, which garnered the most attention, discards 140 years of precedent to radically change Congressional Districts 1 and 2, needlessly shifting 75 towns and 365,706 Granite Staters. While the prior district boundaries were relatively competitive, the proposed boundaries are heavily polarized, with District 1 predictably Republican and District 2 predictably Democratic. This is pure gerrymandering. Map-a-Thon’s analysis verified it, as did analysis by the ACLU, the Princeton Gerrymandering Project and FiveThirtyEight. Just as in the marketplace, voters should demand competition in their voting districts.

The Map-a-Thon’s technical volunteers include our lead mapper, David Andrews, a UNH-trained engineer; John Cross, a systems engineer; Phil Hatcher, a retired UNH computer science professor; Kim Frost, an epidemiologist and global health data expert; Ian Burke, a research and survey design consultant; myself, a retired financial executive, educator and consultant; and more than 300 other Granite Staters who helped to define COIs and collected data in almost every town.

We demonstrated that fair, nonpartisan district maps can follow the law, represent important citizen interests, and maintain competitive elections. Why has our Legislature refused to do the same?

Jeffrey Smith of Epping is a retired financial executive, educator and consultant. Readers can find Map-a-Thon’s detailed reports at opendemocracyaction.org/maps.