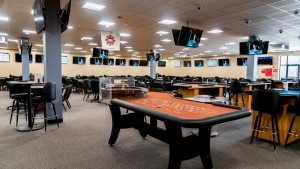 Churchill Downs Inc. says it will be installing some 800 historical horse racing machines at its newly acquired Chasers Poker Room in Salem, which already offers poker and various table games.

Churchill Downs Inc. says it plans to make a multimillion-dollar major investment into expanding and upgrading the Chasers Poker Room in Salem, NH, now that acquisition of the facility has been completed.

CDI, the gaming and entertainment company whose properties include the iconic Churchill Downs racetrack in Kentucky, finalized its purchase of Chasers last week after winning approval from the acquisition from the NH Lottery Commission.

CDI said that its investment in the Salem charitable gaming venue will result in up to 800 “gaming positions” — CDI’s historical racing machines. When completed, the upgrades and acquisition price together will total about $150 million, the company said.

Historical racing machines, which were legalized in the 2021 New Hampshire legislative session, are a variant of slot machines where players can wager on the outcome of a historic, previously run horse race.

“New Hampshire is an exciting opportunity for us, one that allows us to put our historical racing machine expertise to work in the growing New England market,” said CDI CEO Bill Carstanjen.

With its New Hampshire expansion, Churchill Downs will be operating its historical racing business in four states. The company already has a presence in Kentucky and Louisiana, with expansion in Virginia already underway thanks to its acquisition of Peninsula Pacific Entertainment, which should be complete soon.