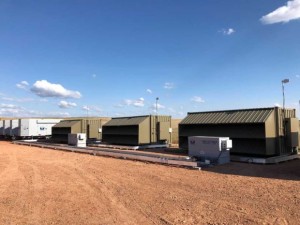 Ten people are already working at Cathedra’s Bitcoin Inc.’s Berlin facility, where they are building Bitcoin mining containers, which the company calls Rovers.

A Canadian bitcoin company is breathing new life into an old steel plant in Berlin, with hopes that it can change the world while they are at it. Cathedra Bitcoin Inc. announced last week that it will manufacture “Bitcoin Mining Rovers” at the Presby Steel site (the former Isaacson Steel fabrication plant) in Berlin and will ship out the decentralized bitcoin modular units to places where they can be fueled by the cheapest source of energy.

Already about 10 people are working in Berlin, with the goal of assembling some $32 million worth of equipment – about 3,500 highly specialized computers the size of a desktop – into the Rovers the size of a 20-foot shipping container.

Cathedra may not be the only bitcoin company to set up shop in the North Country. Two other bitcoin companies, one from Toronto and one from Connecticut, have contacted Benoit Lamontagne, North Country industrial agent for the NH Division of Economic Development, about setting up bitcoin operations there. But both were just inquiries, said Lamontagne, whereas Cathedra has already begun operations.

“I’m just thrilled that this company has chosen the North Country,” Lamontagne said. “It will attract younger folk. We work so hard to keep youth here, and companies like this make them want to stay to have a good job that they enjoy.”

While New Hampshire isn’t offering an incentive to Cathedra, any company in the North Country can take advantage of tax credits tied to each job created that pays twice the minimum wage.

Armstrong said he wasn’t sure how much he plans to invest in the operation or how many people he would hire. But the contrast of new technology in an old steel plant was not lost on Isaac Fithian, Cathedra’s chief field operations and manufacturing officer, who lives in Gorham and was key in bringing the company to New Hampshire.

“At its peak, Berlin was once the largest producer of paper in the world,” said Fithian in a statement. “For much of human history, paper has provided a means of remembrance and the promise that an honest day’s work will not be forgotten. Cathedra will hold to this same promise. Our Rovers will protect the most secure monetary ledger conceived by mankind. It is exciting to start the next chapter of our journey in ‘the city that trees built.’”

In search of energy

Bitcoins are not manufactured but “mined.” A certain amount is available each day, and specialized mining computers have to be the first to solve extremely complicated puzzles to put them into a complex blockchain ledger system, or network, that is public, but not owned by anyone. The computers don’t do this by “being clever,” said Armstrong. Rather they make a guess, and when you make enough guesses, you eventually get a right answer, and get rewarded with that block. The more computer power you have, the more bitcoin you get.

This takes a lot of energy.

According to one report, each bitcoin transaction consumes enough electricity to power a typical American home for six weeks.

However, it has been worth it to investors, because the value of bitcoin, though extremely volatile, on the whole keeps on rising. The cryptocurrency industry, according to some estimates, was worth over $2 trillion last year, though that includes many other currencies besides bitcoins, which was the first and still most common currency employed.

Cathedra plans to assemble its computers into Rovers in Berlin. Cathedra contrasts itself with other companies that centralize their mining in one location, vulnerable to power failures and price hikes. It currently has two locations, a 2-megawatt on-grid location in Washington state, which at the end of September produced 5 bitcoins a month, and a 6.1 MW off-grid location near the North Dakota gas fields, which burns methane byproducts to generate power. The latter produced about 22 bitcoins a month.

Cathedra plans to open up more locations, where the energy is even cheaper.

It is increasingly looking at off-grid locations, flares from oil and gas fields and landfills, to behind-the-meter hydro facilities and even nuclear power plants. The company sees itself working with the energy industry, being an “energy sink” – a guaranteed sale point for the industry, a way to convert energy to cash.

Cathedra – formerly Fortress Technologies Inc. of Vancouver – was incorporated in 2011, went public in 2018 and is traded on the Toronto Stock Exchange, but it went “dormant” for several years, said Armstrong, who with his childhood friend A.J. Scalia were brought into run the company last September.

Both worked for years in the traditional finance industry. Scalia, at JP Morgan’s technology investment group, and Armstrong at Barclays, where he focused on origination of esoteric securitized products.

Around 2017, “we both started falling in love with bitcoin,” said Armstrong, and both went to work in the bitcoin mining team at Galaxy Digital before they took over Fortress and turned it into Cathedra in September.

At the end of September, according to the latest financial statement, the company had nearly $40 million of assets, including $5.7 million in cash and $6.8 million in digital currency. Revenues for the year were $2.8 million, and profits (mainly through the gain in the price of bitcoins) was $3.8 million. (Armstrong said that the company’s fourth-quarter and year-end statement is still being audited).

After the management change, the company sold off shares to raise money to purchase more computers to make more bitcoins.

To raise more capital, in February the company – traded on the Toronto exchange under the ticker symbol CBIT, started also to trade on the Over-the-Counter market, under the symbol CBTTF, with the intention of getting on the Nasdaq exchange this year.

Cathedra also secured another $17 million from NYDIG, a kind of a bitcoin bank, secured by the company’s mining equipment, according to its first shareholder letter on March 7.

The letter doesn’t mention the interest rate, but “when it comes to borrowing in fiat to finance assets that produce bitcoin – an asset which appreciates $150%+ per year on average – almost any cost of debt makes sense.”

With new money and management, “we recently began production of proprietary modular datacenters to house the 5,100 bitcoin mining machines we have scheduled for delivery throughout 2022,” said the letter. “We are proud to be manufacturing our fleet of rovers entirely in New Hampshire, working with the local business community to bring heavy industry back to the U.S.”

But that was one of the few statements in the shareholder letter about the specific business. Most of it reads like a manifesto.

Cryptocurrency has its detractors. Some liken it to a Ponzi scheme. Others as a way to launder money for drug dealers, white nationalists and other nefarious groups. But others hail it as the monetary system of the future, free from government control, and embrace it with almost missionary zeal. Cathedra unabashedly counts itself among the latter.

“The religious connotations of the name ‘Cathedra’ are not lost on us. Rather, they’re an indication of the seriousness with which we regard this mission. Ours is a quest of civilizational importance,” it reads

The shareholder letter also decries the nation’s energy policy – too much emphasis on renewables and not enough on energy creation – and “totalitarian” world monetary management. It also derides some others in the industry – including those promoting other currencies, labeled “shitcoins” – as embracing centralization and focusing on short-term profit.

The letter breaks down ideologies of two worldviews: “Malthusianism,” whose “pessimistic” starting premises is scarcity, and “Prometheanism,” an optimistic belief in “human creativity (that) allows us to liberate and employ resources in a novel way.”

The shareholder letter concludes: “Bitcoin mining is a powerful ally to the Promethean cause. No two forces are more fundamental to keeping disorder at bay and advancing human civilization. We at Cathedra are not alone; there are other Prometheans working tirelessly to further this vision of a freer, more prosperous tomorrow. Human flourishing is earned, not given. Together, we win.”