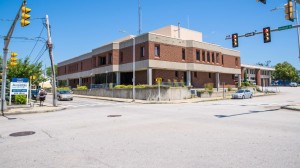 Lincoln Avenue Capital wants to build a four-story, 55-unit building across the street from this site, the former Manchester police station, where a 110-apartment building is planned. It is proposing another 50-unit building nearby.

A California-based builder of affordable housing developments around the country, which has already proposed building 160 apartments in downtown Manchester, is seeking to add another 55 to that total.

Santa Monica-based Lincoln Avenue Capital won approval in April to tear down the former Manchester police station at the corner of Chestnut and Merrimack streets to erect a five-story, 110-unit building, with another four-story building with 50 units to be built across Merrimack Street.

Now, the NH Union Leader reported, the company is seeking another variance to construct another five-story building with 55 units at a nearby site, at 80 Merrimack St. That project would include both affordable and workforce housing units, the newspaper reported. The variance would be needed to tear down the existing building at the site.

The Manchester Zoning Board of Adjustment will hear the plans at 6 p.m. Thursday.

Scott Shaw, vice president and regional project partner for Lincoln Avenue, told the Union Leader said final plans for the two other projects are in the process of being submitted to the city with hopes for funding to come through in the second quarter of 2023. After closing on the property, construction will begin.