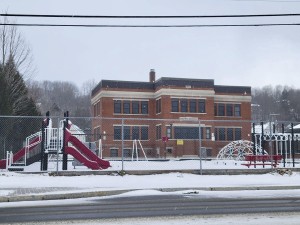 The Brown School in Berlin opened in 1914.

The Brown School, one of eight public schools built in Berlin in the early decades of the 20th century – at a time when the city’s population was at least double what it is now – is now on the State Register of Historic Places.

Its original two-story, flat-roofed building received a one-story addition in the late 1950s. The addition gave the school the L-shape it retains today.

Set in a neighborhood and adjacent streets named after Nordic countries and related folklore, the Brown School remained until 2019 as Berlin’s last neighborhood elementary school.

At the time of its opening, the city’s population was in the 20,000-30,0000 range. Today it is about 10,000. Declining school enrollment resulted in the closure of the Brown School in 2019. Indeed, Berlin High School graduated its smallest numbers of seniors last year. The Brown School is currently undergoing a new lease on life, with its conversion to a multifamily housing complex with 20 mixed-income apartments allowing for both market-rate as well as workforce housing units.

Through a public-private partnership, the renovation will allow for taxes to be collected on the property, another city need. The city currently maintains the property and its utilities. It remains to be seen what the name of the apartment building will be, as far as keeping the Brown School name part of the building’s rehabilitation and reuse.