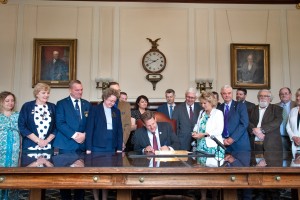 The rate of New Hampshire’s business profits tax will fall next year after Gov. Chris Sununu signed a flurry of 63 bills into law late last week.

House Bill 1221 cuts the rate of the BPT from 7.6 percent to 7.5 percent, or about $8.5 million, and also gives a one-time infusion of $28 million in aid to municipalities in the hopes that they will use the money to cut property taxes. While labeled “a local property tax reduction” in the bill, there is no obligation for cities and towns to use the money to reduce property taxes. The money will go to the towns in July, while the BPT cuts won’t go into effect until January. The rate of the business enterprise tax remains unchanged.

Sununu signed the bill last Friday without fanfare, even though cutting business taxes was a key part of his part of his State of the State address in January, when he extoled the virtues of cutting them in the past and urged lawmakers, “Let’s do it again.”

Also among the bills Sununu signed into last Friday: