‘It’s not a slam dunk,’ but passage looks ‘better than it’s been before,’ says proponent 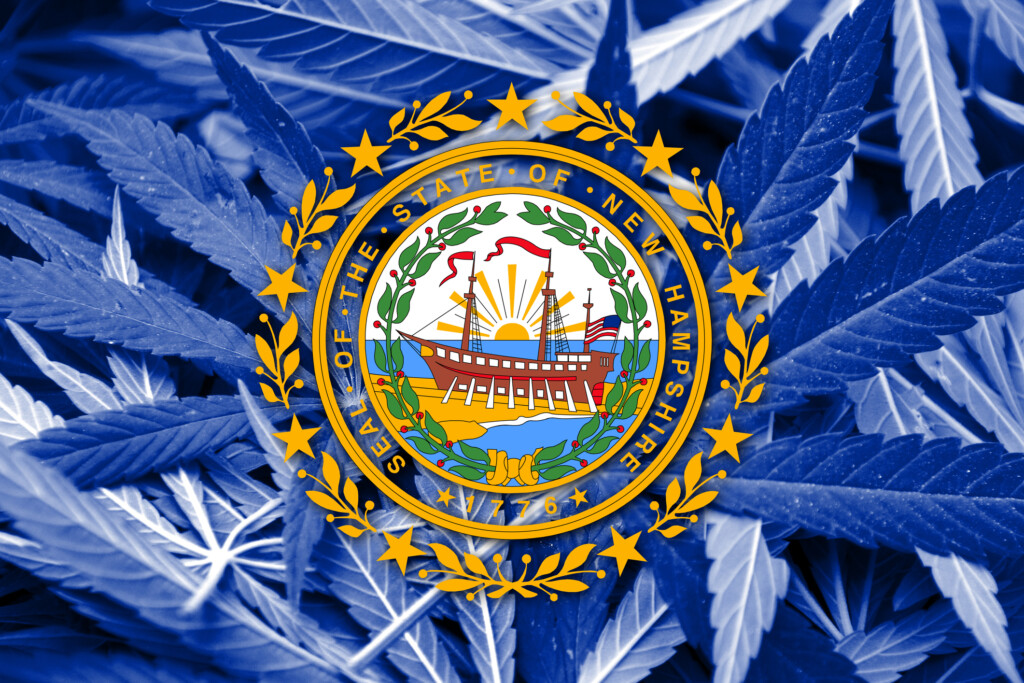 A bipartisan coalition is expected to move forward with a marijuana legalization bill in the NH House of Representatives, in hopes of ending the Granite State’s status as an island of recreational cannabis prohibition, surrounded by places that have legalized the drug.

“It’s obviously come to a point where something has to be done,” said Ross Connolly, deputy state director for Americans for Prosperity-NH, a conservative political advocacy group. “The status quo can’t continue.”

The bill — which likely will be introduced early next year — will include a private marketplace and low tax rate that are “tremendously different” from the past efforts, according to former state Rep. Timothy T. Egan, D-Sugar Hill, who chaired the House Democratic Cannabis Caucus until losing re-election in November.

Although Egan lost his seat, he’s still working on legalization in his new role as inaugural chair of the advisory board for the NH Cannabis Association, a Manchester-based industry group. The bill will be sponsored by representatives from both sides of the aisle, Egan noted.

The coalition is “conferring” with other lawmakers, Egan said, including Rep. Daniel Eaton, D-Stoddard, who has already taken steps toward introducing a legalization bill.

Over the past few years, efforts to legalize recreational marijuana have passed the House, but died in the Senate, including two bills earlier this year. The latest legalization effort failed 15-9, with three Democratic senators joining all but two Republicans in voting against that bill.

As with the last legislative session, Republicans will have a 14-10 majority in the Senate in the next two years. However, the election earlier this month caused some shake-ups, and legalization is not a strictly partisan issue, advocates say.

For example, Democrat Kevin Cavanaugh, of Manchester, who voted against legalization did not seek re-election to the Senate. He was replaced by Republican Keith Murphy who formerly voted to legalize cannabis as a member of the House. With changes like that, advocates are more cautiously optimistic than with prior legislation about New Hampshire legalizing marijuana.

“It’s not a slam dunk, but it’s better than it’s been before,” said Karen O’Keefe, director of state policies for the Marijuana Policy Project, a national group that advocates for cannabis reform, including legalization. “It’s the perfect issue to actually get something positive done with bipartisan agreement — which can be rare.”

Popular with the public

A February 2022 poll by the University of New Hampshire found that 74 percent of Granite Staters support marijuana legalization, and only 15 percent are opposed. Still, Gov. Chris Sununu, a Republican, has publicly opposed legalization. As recently as a Nov. 1 debate, he said “now is not the time” to legalize cannabis.

The Granite State did decriminalize cannabis in 2017, meaning possession of up to 3/4 of an ounce can result in a civil violation and a fine, similar to a traffic ticket, while larger quantities still carry criminal charges. Medical marijuana has been legal in the state since 2013.

But the bordering states of Vermont, Massachusetts and Maine, as well as Canada, all allow for adult use and retail sales, driving New Hampshire residents seeking legal cannabis out-of-state to buy it. Advocates say this not only takes away from state revenue, but also puts New Hampshire in the position of enforcing the prohibition of marijuana, when across state lines people are building lucrative businesses in the cannabis industry.

“Our message is accepting reality,” Connolly, of AFP-NH, said. “We’re missing out on a big opportunity here where we take our ‘live free or die’ state values and apply them to a retail market.”

The coalition that helped draft the new legislation includes AFP-NH, the New Hampshire chapter of the American Civil Liberties Union, the Marijuana Policy Project, the NH Cannabis Association and Prime Alternative Treatment Centers of NH, a medical cannabis provider in the state.

If adopted, the law would create a private marketplace for cannabis sales and focus on low taxation. Marijuana would be taxed at the current meals-and-rooms tax rate of 8.5 percent, with proceeds going toward unmet pension obligations across the state and drug education and prevention, according to Egan.

That’s different from neighboring Vermont, which legalized the sale of adult-use cannabis in 2020, where towns had to vote to opt in to the industry. Brattleboro was one of the communities to allow retail cannabis sales, with one shop open so far.

Connolly said the New Hampshire legislation would allow for a “very level playing field that isn’t hindered by over-regulation.”

Unlike a bill that was killed in the Senate earlier this year, the current legislation does not take a state-run approach to cannabis sales. That bill would have given the NH Liquor Commission, which runs liquor stores statewide, authority over marijuana sales as well.

Any formal involvement of a state in the industry is a “poison pill,” said O’Keefe, due to federal prohibition on cannabis. A state government, she said, is unlikely to directly run an industry that is federally illegal. She points out that Utah initially planned for a state-run marketplace for marijuana, but later needed to change to a private marketplace.

“We certainly don’t think state-run stores are feasible given federal laws,” she said.

One notable component missing from the draft legislation, Egan said, is any talk of expungement for people who have marijuana-related charges on their criminal records.

Expungement is a process by which a criminal conviction is entirely removed from a person’s record. In October, President Biden announced federal pardons for simple marijuana possession, but that does not affect state-level convictions.

Egan said that’s a critical aspect of any legalization bill, but will require participation and advice from law enforcement and the criminal justice system. Those institutions have been hesitant to get involved before a bill is introduced, according to Egan.

“Expungement will take a little more time, patience and involvement of [more people] than just this coalition,” Egan said.

But for the ACLU, expungement is of paramount importance. In order to be equitable, expungement must be free and automatic, said Frank Knaack, policy director of the New Hampshire chapter of the ACLU.

In 2020, data from the ACLU show Black people in New Hampshire were 4.8 times more likely to be arrested for cannabis possession than white people — a racial disparity that has increased 46 percent since 2010.

“We see the need to legalize adult-use through two lenses: harm reduction and racial justice …” said Knaack. “We are way behind the times continuing to criminalize people for something that is legal in neighboring states.”

To overcome a gubernatorial veto, the coalition would need 16 senators to vote for the bill, according to Matt Simon, director of public and government relations for Prime Alternative Treatment Centers of NH and longtime advocate for legalization.

“We’ve always been a few votes short,” he said.

Risk, but not benefit

While there’s no formal data on how often Granite Staters drive over the borders to purchase legal cannabis, there’s lots of anecdotal evidence that New Hampshire residents purchase legal pot and presumably take it to their homes to consume (despite that being illegal), advocates said. That’s not only an economic drain on the state — it also shows that any complications associated with marijuana use are already here, they added.

“Marijuana is not harmless. There are harms,” Simon said. “But are those harms best dealt with by prohibition and an illicit market run by felons, or by a regulated system?”

Connolly agreed, pointing out that New Hampshire is also missing out on tax revenue.

“The individuals who want to use it are using, and New Hampshire isn’t getting any of the benefits. That’s the real argument we’re making,” he said.

Sununu says the timing is not right because of the ongoing opioid epidemic in the state. Yet research has shown that legalized marijuana is linked with lower opioid overdose rates and the idea of cannabis as a “gateway drug” is outdated, according to Dr. Joe Hannon, a former Republican state representative from Lee who served on the NH Commission to Study the Legalization and Taxation of Marijuana in 2017 and 2018.

With just 24 state senators, the body’s small size means that’s where people often focus lobbying efforts, since just a few votes can make a difference between a bill passing or being killed, Simon said. In addition, law enforcement, which generally has been opposed to past legalization efforts, holds a lot of sway in the Senate, Knaack added.

“This highlights the enormous power that law enforcement has in their ability to control legislative outcomes in Concord …” Knaack said.

In the past, police chiefs have spoken out against legalization, citing issues including the opioid epidemic, concerns about children having access to cannabis, and lack of testing for impaired drivers.

But to Knaack, those are all concerns that the 21 states that have already legalized cannabis have found ways to address.

“What’s almost as concerning as police leveraging that kind of power to kill [legislation] supported by a broad cross-section of Granite Staters, is that they’re doing so by pushing misinformation on these issues,” Knaack said.

Hannon said some objections from Sununu and the Senate are true concerns, and yet “can’t be the reason we don’t legalize.” While there’s currently no breath test that can detect marijuana in impaired drivers, he pointed out that private industry is racing to develop a test similar to a breathalyzer for alcohol.

Hannon previously was concerned about rising accidental marijuana consumption by children in states that have legalized it. Yet, after speaking with officials in those states he realized that most children don’t have lasting effects and the cases, though rising, remain rare.

On average, New Hampshire’s lawmakers also are among the oldest state legislators in the country. That likely plays a role in the hesitation to pass legalization, according to Hannon, particularly in the Senate, which tends to have older members — a demographic that data show is less likely to support legalization.

“There’s a lot of misconceptions still, that ‘reefer madness’ out there,” he said. “That’s why people won’t vote for legalization. They were raised, my generation and people older than us, to believe that it’s evil and will ruin your life.”

Yet Hannon, 50, who has been in recovery from a substance-use disorder for more than 35 years, said the real harm is the hold that the war on drugs still has over lawmakers.

“This is not just the idea of personal choice and freedom,” he said. “There’s a greater societal impact we have to address, of this harmful system we have had for too long … We’re going to look back and say, ‘Why did we do this?’ ”

For Egan, legalization is a chance for New Hampshire to benefit from a social change that seems increasingly inevitable.

“I want to sit down and say, ‘How do we find a solution that fits everyone, and that benefits our state?’ It’s time to move on and move forward,” he said. “At some point, we will begin to see the harm of our inaction, and it’s going to be economics.”